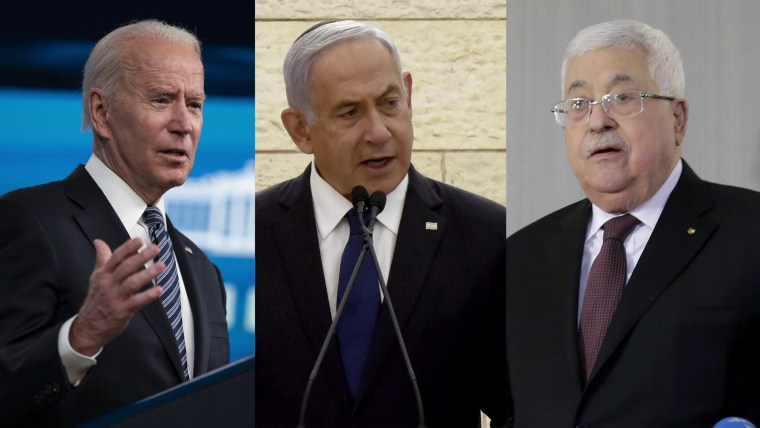 Diplomatic efforts to broker a cease-fire between Israel and Hamas ramped up on Sunday as the death toll from the escalating conflict continued to climb.

After at least 37 Palestinians were killed by pre-dawn Israeli airstrikes on the Gaza Strip, Hamas said it was unleashing large missile barrages into Israel. Sirens warning of rockets wailed in the Israeli cities of Ashkelon and Ashdod, between Gaza and Tel Aviv. The Magen David Adom emergency service reported “direct hits.”

“Fighting must stop. It must stop immediately,” he said.

Despite the appeals, Israeli Prime Minister Benjamin Netanyahu said his military operation was continuing “at full force” despite any “international pressures.”

“There are always pressures, but overall we get very serious backing,” he said Sunday in an address on Israeli television, citing support from the U.S.

Over the last week, at least 188 Palestinians — including 55 children — have been killed in Gaza, the latest figures from its health ministry show. In Israel, 10 people have been killed. Hundreds have been wounded on both sides.

In downtown Gaza City, ambulance teams and rescuers combed through the rubble left from pre-dawn airstrikes. Rescue teams were still searching for bodies and survivors into the early evening. Gaza’s Health Ministry said the death toll of 37 could climb and that 50 people were injured.

The ministry’s Dr. Yousef Abu Al-Rish warned that Gaza City’s health system was nearing the point of collapse, telling NBC News that supplies were running low and damage to the streets around the main Al-Shifa hospital was impeding access for the injured.

The Israeli Defense Forces said in a statement on Sunday that the casualties were “unintended” after they struck an underground military facility, causing civilian houses above to collapse.

“The IDF aspires to avoid civilian casualties as far as possible but Hamas bears responsibilities for intentionally locating its military infrastructure under civilian houses, thus exposing civilians to danger,” the statement said.

The medical charity Doctors Without Borders said one of its clinics also was damaged in the overnight bombardment.

1/ The firing continues, with direct hits:

In the past few minutes, heavy barrages of rockets have been fired at the Lachish and Negev areas. There are reports of several direct hits. pic.twitter.com/0l6EwDwvbp

Since Monday, Hamas has fired more than 2,900 missiles at Israel, according to Israel’s military. One man was killed in when a rocket exploded in the Tel Aviv suburb of Ramat Gan on Saturday.

The Israeli military said early Sunday that its fighter jets and aircraft had struck 90 targets in Gaza — including the homes of senior Hamas leader Yahya Sinwa and his brother, Muhammad — over the weekend.

The military also defended its decision to flatten the Al-Jala tower, which housed the offices of international media organizations including The Associated Press and Al Jazeera, saying the building was “an important base of operations” for Hamas military intelligence.

Yesterday, we targeted an important base of operations for Hamas’ military intel in Al Jala Tower in Gaza.

The base gathered intel for attacks against Israel, manufactured weapons & positioned equipment to hamper IDF operations.

Press freedom organizations and the AP have called for an investigation and justification for the airstrike.

AP’s CEO Gary Pruitt said the news organization had “no indication” Hamas was active in the building. “This is something we actively check to the best of our ability,” he said in a statement. “We would never knowingly put our journalists at risk.”

As casualties continued to climb, international leaders have expressed mounting alarm over the intensifying conflict and urged de-escalation. Saudi Arabia convened an emergency meeting of foreign ministers of the Organization of Islamic Cooperation for Sunday.

“We will coordinate and discuss how the EU can best contribute to end the current violence,” Josep Borrell said in a statement on Twitter.

Pope Francis used his weekly address to appeal for calm, urging Israeli and Palestinian leaders to “stop the clamor of arms and walk the path of peace.”

Netanyahu, though, said the operation was “not over yet” — and will continue for “as long as it takes.”

His comments came a day after a call with President Joe Biden, who the White House said “reaffirmed his strong support for Israel’s right to defend itself against rocket attacks.”

Anger over the spiraling conflict has sparked deadly protests in the occupied West Bank and a wave of intercommunal violence in Israel.

On Sunday afternoon, several Israeli police officers were run over in what appeared to be a vehicle attack on a checkpoint in Jerusalem. A police spokeswoman said the driver of the vehicle was shot and that six officers were receiving medical treatment.