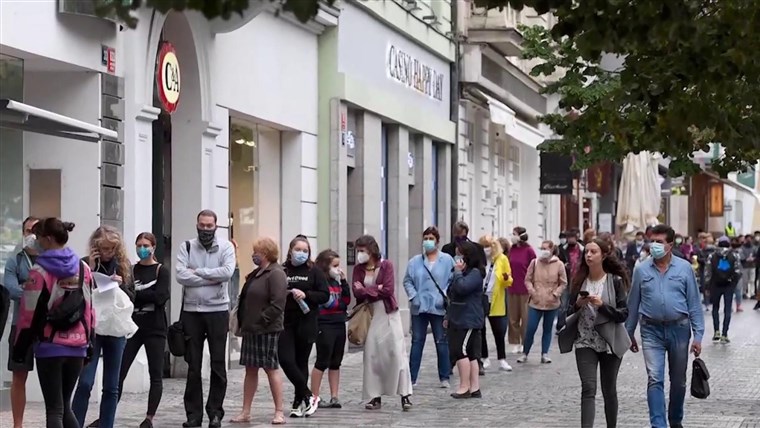 Last spring, that was the message Prime Minister Benjamin Netanyahu gave Israelis after a strict lockdown that scuppered their Passover plans and confined residents to within about a hundred yards of their homes.

On Friday, at the beginning of the Jewish High Holy Day season, Israel entered a second lockdown as coronavirus cases soar in a country of around 9 million people.

Restaurants, hotels and gyms, among other businesses, have been told to close, and Israelis will face restrictions on movement and gatherings for at least three weeks.

It comes at a sensitive time, as the new lockdown started hours before the religious holiday of Rosh Hashanah, the Jewish New Year, which began at at 6:20 p.m. local time (11:20 a.m. ET). It will also fall over Yom Kippur, the Jewish Day of Atonement, later this month and Sukkot, which celebrates the fall harvest, in early October.

Israelis typically hold large family gatherings and pack synagogues during this time of year — scenarios where the risk of infection is high.

“Our goal is to curb the rise, reduce morbidity,” said Netanyahu in announcing the new restrictions on Sunday. “I know these steps come at a difficult price for all of us. This is not the holiday we are used to.”

Israel has recorded 176,933 coronavirus cases since the beginning of the pandemic and 1,169 deaths, Health Ministry figures show. On Thursday, the country registered 5,238 new cases.

As cases in Israel have risen, so have cases among Palestinians in the West Bank and Gaza. As of Friday, there have been a total of 2,223 cases recorded in the Gaza strip where a nightly curfew has been in place since Aug. 24, according to the Palestinian ministry of health.

In some parts of Gaza, a lockdown has been imposed in the day as well. In the West Bank, 31,667 have been recorded since the beginning of the pandemic.

How Israel got here

In May, Israel had largely contained its outbreak and the government began to ease lockdown measures.

However, critics say that the country opened businesses and schools too quickly, allowing the virus to spread unchecked.

“Everything was opened altogether and that was a big mistake,” said Galia Rahav, head of the infectious disease unit and laboratories at the Sheba Medical Center in Ramat Gan.

Rahav said that when Israelis started gathering together again, people did not wear masks and the first clusters of cases were soon reported among religious communities, many of whom have big families and pray in the confined space of the synagogue. Next, clusters were reported among Arab-Israeli communities, she said.

Israel has imposed restrictions on different towns and cities as they report alarming outbreaks but religious leaders have hit back, with mayors from ultra-Orthodox cities and towns accusing Netanyahu of aiming restrictions at Haredi communities, according to The Associated Press.

Beyond the “irresponsible” exit from lockdown, Rahav said Israel was not prepared for contact tracing, testing and stopping the chain of transmission.

Many Israelis also do not obey the rules, she said, adding that the success of the new lockdown depended on the obedience of the country’s citizens.

Some are fed up

Some, however, are fed up with what they see as government incompetency over the virus.

“The policy towards restaurants is very muffled, it’s not black or white, there is a lot of gray areas,” said Nir Shohat, the owner of the SushiMoto restaurant in Sderot, a town not far from the Gaza Strip.

Security incidents over the years means he is used to closing his business at the drop of a hat, but that did not curb his frustration with the government.

“It would have been best if we managed this virus and not that the virus is managing us,” he said.

The current government was the “worst” and “most expensive” Israel had ever had, he added.

The government announced Thursday that it would expand the economic safety net to help businesses affected by the lockdown.

However, Shohat is not alone in his frustration with the government. Netanyahu has faced a public outcry over his management of the crisis and has seen thousands of protesters descend on his Jerusalem residence on a regular basis since the outbreak began.

There are other reasons Israelis are frustrated with Netanyahu’s leadership, including the fact he was indicted on corruption charges in November. He denies any wrongdoing.

A poll published this month found that Israelis were pessimistic about the country’s outlook ahead of the Jewish New Year, with some 41 percent responding that they thought the upcoming year would be worse than the last.

For Dov Lipman, a former member of the Knesset, Israel’s Parliament, the greatest difficulty about the second lockdown is that it falls over the High Holidays, because of their religious significance and because it’s a time traditionally spent with family.

When people were locked down during Passover, he said that he thought people understood that it was “a one-time situation and that it’s for the public health.”

“I think everyone was stronger emotionally to deal with that,” he said.

The fact that a second lockdown will take place over the High Holy Days made the restrictions more difficult psychologically and emotionally, he said.

“You are definitely going to see sadness due to that new reality,” he said.

But Lipman said he was scrambling to celebrate the holiday and obey the rules. He added that he hoped the lockdown would put a stop to large gatherings that spread the virus.

Rabbi Yuval Cherlow said he was also trying to look on the bright side and to cheer up his community.

“They are depressed, they are disappointed,” he said, explaining that the essential part of the High Holidays was to attend synagogue and be with people and family members.

Jerusalem’s Great Synagogue announced this week that it would not hold High Holy Day services for the first time since it opened in 1958 because of the pandemic.

The holiday, Cherlow said, would feel “naked” without the ceremonies and without the synagogues. But he said even when faced with a strange and sad situation like this it was important to remain positive.

“You can remember that actually thank God you are healthy and that God exists everywhere in the world and it’s a new year.”