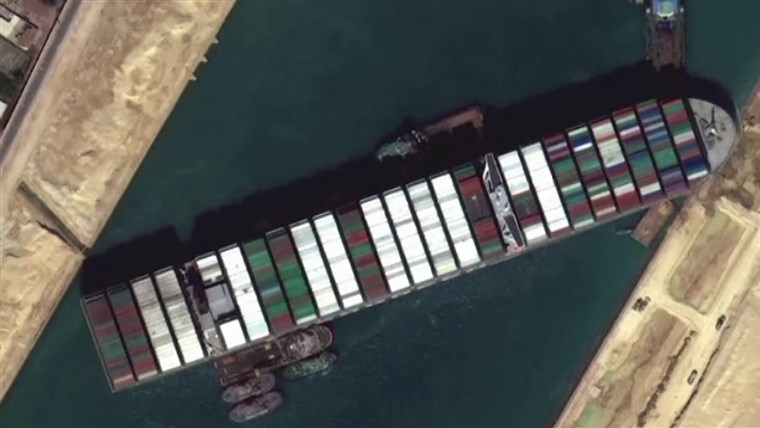 SUEZ, Egypt — Containers could be removed in a bid to free the skyscraper-size cargo ship that has been blocking Egypt’s Suez Canal since Tuesday, the head of the canal authority said Sunday.

Lt. Gen. Osama Rabie, chairman of the Suez Canal Authority, told the Egyptian television channel Extra News that the country’s president, Abdel Fattah el-Sissi, had ordered the authority to prepare for all options, including taking some of the 18,300 containers off the 1,300-foot-long ship, the Ever Given. Without elaborating, he said officials had been in talks with the U.S. about the possibility of removing some of the cargo.

Dredgers working to dislodge the stranded vessel have so far shifted 27,000 metric tons of sand to a depth of 60 feet, Rabie said in a separate statement Sunday.

He said two tugboats joined the operation Sunday, bringing the total to 14. They were pulling maneuvers from three directions to dislodge the ship, he said.

Efforts will continue “around the clock” in line with wind conditions and tides, he said.

The ship’s technical manager, Bernhard Schulte Shipmanagement, said Saturday that the rudder was released from sediment at the stern Friday.

The Ever Given jammed diagonally across a southern section of the Suez Canal on Tuesday, leaving more than 300 ships, including dozens of container ships and bulk carriers, unable to use the key trading route.

Shoei Kisen Kaisha Ltd., the company that owns the vessel, had said it was considering removing containers if other refloating efforts failed.

The Panama-flagged, Japanese-owned ship, which carries cargo between Asia and Europe, halted all traffic across the canal. Experts say it could take weeks to free it and clear the blockage.

The closing could affect oil and gas shipments to Europe from the Middle East. Already, Syria has begun rationing the distribution of fuel in the war-torn country because of concerns about delays of shipments arriving at the blockage, The Associated Press reported.

If the blockage drags on, shippers may decide to reroute their cargoes around the Cape of Good Hope at the southern tip of Africa, adding about two weeks and extra fuel costs to journeys.

Bernhard Schulte Shipmanagement said Saturday that two canal pilots on board were aboard the Ever Given, which was en route to the Netherlands, at the time of the incident. The ship’s 25 crew members, all of them Indian nationals, are safe and remain on board, the company said.

It said that the initial investigation suggests that the vessel ran aground because of strong wind, not engine failure, and that there have been no reports of pollution or cargo damage.

Rabie said Saturday that the investigation continues, and he did not rule out human or technical error.

Charlene Gubash reported from Suez and Yuliya Talmazan from London.

Charlene Gubash is an NBC News producer based in Cairo. Gubash, a native Minnesotan, has lived and worked in the Egyptian capital since 1985.

Reuters and The Associated Press contributed.