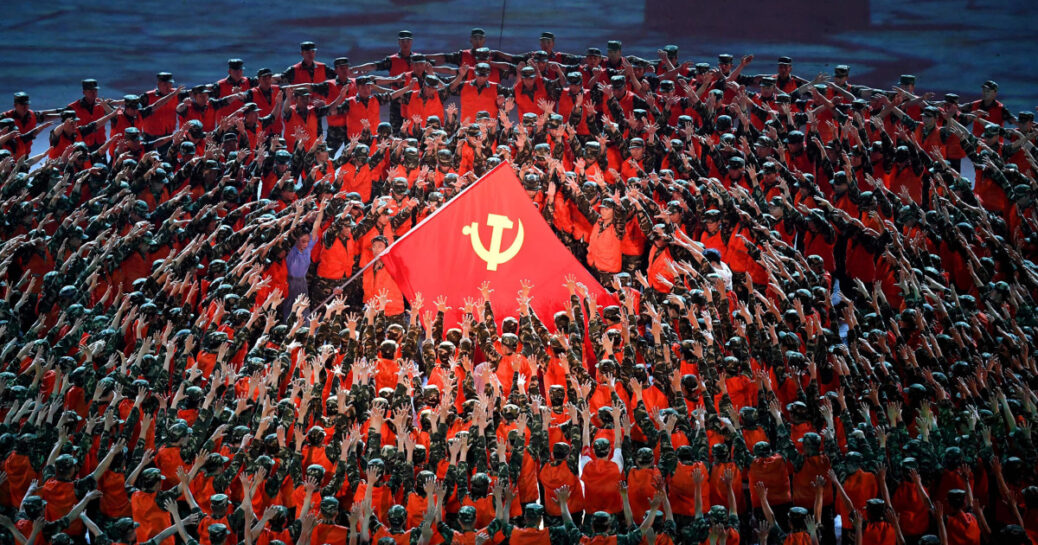 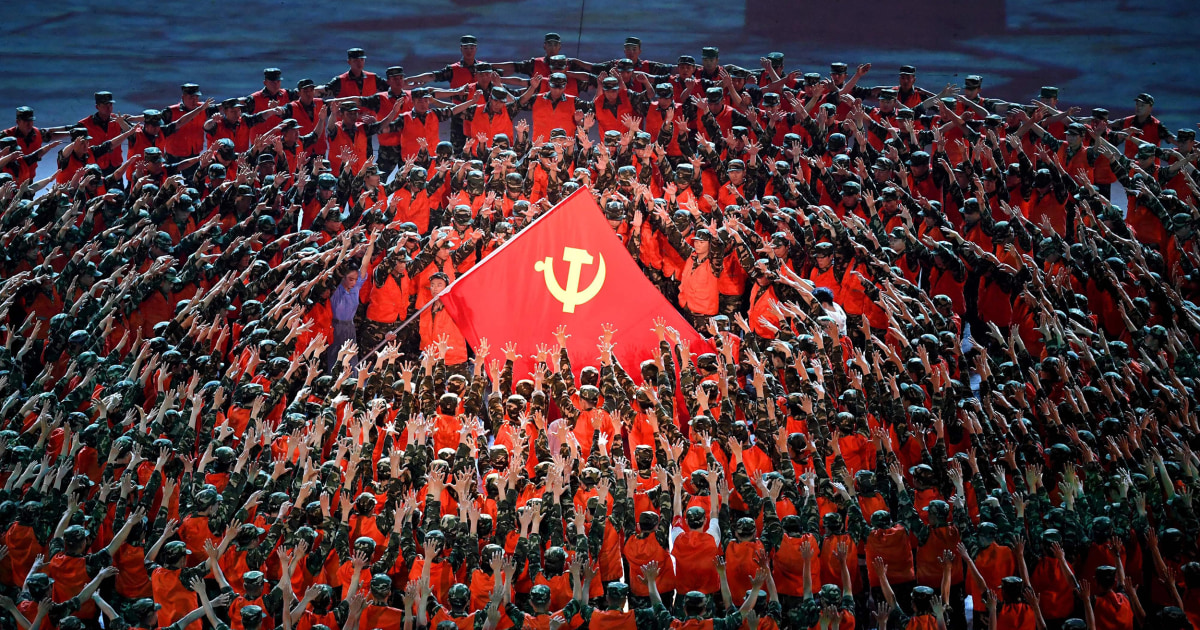 BEIJING — From rockets to rappers, Beijing is rolling out the red carpet to celebrate 100 years of the Chinese Communist Party on Thursday.

President Xi Jinping presided over a massive gathering in Beijing’s Tiananmen Square, the site of pro-democracy demonstrations in 1989 that ended in bloodshed, to mark the centenary of his ruling party on Thursday.

With the massive festivities, China is looking to memorialize its version of history, reinforce its future and deflect Western criticism of its authoritarian rule, alleged human rights abuses against the Uyghurs and the increasing crackdown on dissent in Hong Kong.

Xi, wearing a grey buttoned-up suit of the type worn by Mao Zedong, emphasized the party’s role in bringing China to global prominence and vowed to make it a 21st century world power.

However, Xi received the most prolonged applause when he said that China will not be bullied on the world stage in a clear reference to U.S. and other Western powers’ accusations that Beijing has been abusing its power from Xinjiang to Hong Kong.

“No one should underestimate the great resolve, the strong will, and the extraordinary ability of the Chinese people to defend their national sovereignty and territorial integrity!” said Xi.

“Chinese people will never allow foreign bullying, oppressing, or subjugating. Anyone who would attempt to do so will find themselves on a collision course with a great wall of steel forged by over 1.4 billion Chinese people!”

Looking to increase patriotic fervor ahead of the centennial, Chinese President Xi Jinping has called on the party’s 95 million members to pass “red genes and revolutionary fire” to later generations.

On Monday evening, the party staged a gala performance in Beijing’s National Stadium, commonly known as the “Bird’s Nest.” Party leaders and foreign diplomats watched an extravaganza of song, dance and theater which credited the party with guiding China’s rise into a global power over the past century.

But critics have noted that darker parts in the party’s history were noticeably absent from the show that culminated with the audience singing the song “Without the Communist Party, there would be no new China” and five minutes of fireworks.

The performance was just one of many events planned this year as several parts of the nation have returned to normalcy amid the coronavirus pandemic, which was first identified in the city of Wuhan. China’s ambitious space program marked a breakthrough June 17 with the first manned-launch in years.

A week after blasting off, the three astronauts flanked by the Chinese flag and the Communist Party flag in their space module saluted Xi during a video conversation.

“The space dream is part of the dream to make China stronger,” Xi declared. “We are proud of our great party and motherland,” Nie Haisheng, the commanding astronaut, responded.

China’s top 100 rappers have released a 15-minute hip-hop anthem celebrating the centennial with praise for the military, high-speed trains, 5G technology and the space program. And a television series that dramatizes the party’s founding called “The Age of Awakening” has had over 1.3 billion views, according to a ratings research center on the Douban social networking platform.

The festivities come as Beijing tries to shore up its image amid heightened tensions between China and Western democracies.

Earlier this month, the Group of Seven nations led by the United States demonstrated unprecedented unity by calling on China to “respect human rights and fundamental freedoms” with regard to the minority Uyghurs in Xinjiang province, Hong Kong, Tibet and other issues. And NATO declared that China’s behavior “presents systemic challenges to the rules-based international order.”

The concerted moves were considered a victory for President Joe Biden’s strategy to frame the conflict with China as one between democracy and autocracy.

But Communist Party officials are eager to frame the celebrations as another notch in a list of achievements.

Victor Gao, the vice president of the Center for China and Globalization, a Beijing-based think tank that focuses on public policy and globalization issues, argued there are “ample reasons” for China to laud the party’s centennial.

Some of the achievements he listed include, “eliminating abject poverty, improving the health and life expectancy of 1.4 billion Chinese people, rolling out one of the best infrastructure networks in the world, and leapfrogging into the world’s second largest economy without resorting to colonization.”

For Dai Jincun, 49, a farmer turned car wash operator in Beijing, the party’s biggest achievement is simple: It’s given people a “sense of security.”

“In my home village in southern Sichuan, people no longer have a sense of fear,” said Dai, explaining that farmers now enjoy pension and health insurance, which used to be for urban residents only.

“I have a sick cousin who, because he was poor, stayed in a hospital for months without paying anything,” he said.

A survey by the University of California’s China Data Lab seems to bear out Dai’s claim of satisfaction among many Chinese people.

When asked whether they prefer living under China’s political system as compared to that of other systems, 83 percent of respondents agreed or strongly agreed in May 2020.

And a whopping 95 percent of Chinese citizens expressed satisfaction with Beijing’s government, according to July 2020 polling data from the Ash Center at Harvard’s Kennedy School of Government.

During the build-up to the centennial, to promote patriotism and boost national unity a wave of state-supported “Red tourism” has swept across China.

Millions have flocked to places like Yan’an, the city in northern Sha’anxi province considered to be the birthplace of the revolution. Pilgrims dress up in replica Red Army costumes and visit the caves where Mao Zedong and other Communist leaders lived for 13 years developing strategies that eventually proved effective against the Japanese forces and U.S.-supported nationalist army before sweeping to power in 1949.

Yet the official party version of history leaves out several key chapters, including the “catastrophic misrule” it was responsible for in the early decades, said William Kirby, professor of China studies at Harvard University, referring to the millions of people who starved to death during the Great Leap Forward of the late 1950s, and the chaos and persecutions unleashed by the Cultural Revolution in the 1960s.

“And this is why this anniversary can be celebrated today, the Communist Party received something very rare in history: a second chance,” Kirby said. “After 1978, it made the most of that second chance by largely abandoning Maoist policies.”

But a new “Concise History of the Communist Party of China” timed for the party anniversary seems to have revised history by avoiding direct criticism of Mao.

Instead it simply states that Mao waged “incessant struggle against corruption, special privileges and bureaucratism.” It also stresses the importance of centralized leadership by declaring “there must be a main peak among the majestic mountains.”

Such burnishing of Mao’s legacy has prompted criticism that Xi is trying to justify his strongman style of leadership. But party leaders argue that’s not the case.

“This is not revising party history, but continuously improving our understanding of the past, which includes our mistakes and how we correct them,” party history scholar Zhang Shiyi recently told a group of foreign reporters.

Still critics say Xi’s emergence as China’s most powerful leader since Mao could be a potential challenge for the party.

“President Xi’s ending of presidential terms and the lack of a designated successor raises the prospects of political instability when he eventually departs the scene,” Kirby warned.

But after all its successes, he believes, the Communist Party is still grasping for an elusive goal: legitimacy.

“What is surprising, when one looks over this history — growth from an insignificant beginning as an underground party to ruling and presiding over the enormous realm and population that is China’s — is how sensitive the party is to any critique. It faces enduring questions of legitimacy,” Kirby said. “It is today one of the most powerful parties on Earth, but there are good historical reasons that it remains powerfully insecure.”

However, the legitimacy it seeks doesn’t come from economic might, according to Teng Biao, a Chinese human rights lawyer and a visiting professor at the University of Chicago.

“There are serious violations of human rights and basic liberties in China,” he said. “Only constitutional democracy, with its multiparty competition, elections and separation of powers, can fundamentally remedy that,” he argues.