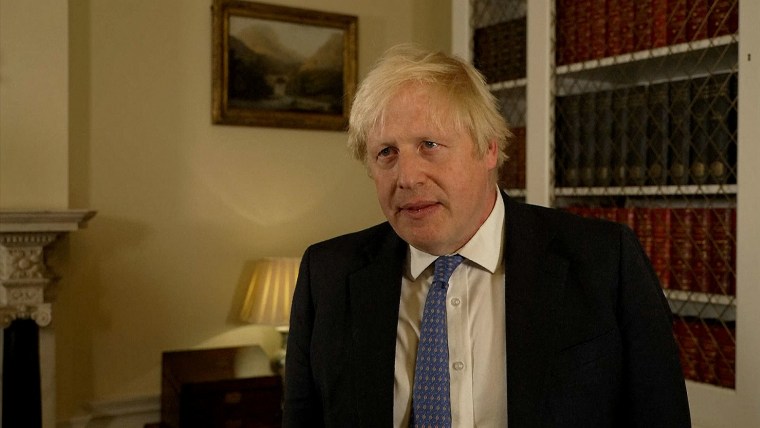 LONDON — Britain and France traded accusations Thursday after at least 27 people drowned while trying to cross the channel separating the two countries in small inflatable boats, a disaster that delivered tragic impetus to calls for action on a long-simmering migrant crisis.

In the wake of one of the deadliest incidents to unfold off their shores in recent years, leaders on both sides vowed to ramp up efforts to put a stop to the crossings.

French President Emmanuel Macron said France would not allow the Calais coast to “become a cemetery” as he urged the U.K. not to use the tragedy for “political purposes.” British Prime Minister Boris Johnson vowed to stop the smugglers facilitating the dangerous sea crossings from “getting away with murder.”

But advocates and politicians who have long called for a more humane approach to the contentious issue said both countries bore a degree of responsibility for the loss of life. It might have been avoided, they said, had there been a safe and legal route to the U.K. for those determined to leave their homes far behind in the hope of a better life.

From the back of a truck to small boats

“The first thing we need to understand is that this is a situation that has been ongoing in one way or another for more than 20 years,” Robert McNeil, the Deputy Director from the Migration Observatory at the University of Oxford, told NBC News in a phone interview on Thursday.

While migrants and asylum seekers once relied heavily on using Eurostar trains and being smuggled onto trucks to reach British soil, McNeil said a crackdown at the French-British border has seen people increasingly turn to crossing the channel as a faster and more reliable route to the U.K.

Since 2018, he said, the number of people risking the dangerous journey across the roughly 45-mile stretch of freezing water has surged. That’s despite it being one of the busiest shipping lanes in the world, and dominated by strong currents.

“Once it became clear that the small boat worked, you saw a very, very rapid escalation,” McNeil said.

After a slight lull McNeil attributed to the Covid-19 pandemic, recent months have seen a steady rise in arrivals. The daily number of people crossing the channel on small boats hit 1,185 people on Nov. 11, surpassing a record set earlier in the month, according to Sky News, which is owned by NBC News’ parent company Comcast.

A spokesperson for Britain’s Home Office told NBC News they could not provide commentary on the reported numbers of crossings.

The rise comes amid growing focus — and friction — over the issues of migration and security both in and between both countries. In France Macron is hoping to stave off a far-right challenge ahead of next year’s presidential election, while in the U.K. supporters of the Brexit campaign that saw the country exit the European Union, and helped elevate Johnson to power, have demanded tougher action.

On Thursday British officials criticized Paris for rejecting an offer of joint patrols along the channel’s coast. French officials have accused the U.K. of making it too easy for migrants to remain in the country and work if they safely navigate the crossing. Macron also called on other European countries to do more to stop the migrants reaching France in the first place.

No ‘safe and legal route’ to U.K., advocates say

Tim Naor Hilton, the chief executive of the immigration advocacy group Refugee Action, said he believed France and Britain’s response to the unfolding crisis was wrongheaded.

Migrants and asylum seekers would continue to risk their lives to reach the U.K. unless “safe and legal” routes to claiming asylum were made available, he said.

“What we know is that people who are crossing the channel in these small boats are taking unbelievable risks, risks they know and understand, but it shows that level of desperation to be able to find safety and protection and to build a new life,” he said.

A report published earlier this month by the Refugee Council, a U.K.-based organization working to support asylum seekers and migrants, found that 91 percent of people crossing the channel between January 2020 and May 2021 had come from just ten countries “where human rights abuses and persecution are common.”

Among those countries were Afghanistan, Iran, Syria, Iraq, Sudan and Yemen, the report said, citing data obtained from Britain’s interior ministry through a Freedom of Information request. A spokesperson for the ministry told NBC News they could not provide any comment on the subject.

“They are fleeing for their safety and to try to rebuild their lives and right now what we’re seeing is those same people dying in the waters around this country which should be a total moment of national shame,” Naor Hilton said.

In a statement, Doctors Without Borders said Wednesday’s tragedy was a “tragic reminder that harsh migration policies do not work.”

“Without enough safe and legal routes, people have no choice other than to risk their lives to come to the U.K.”

McNeil said he also believed that access to a safe means of claiming asylum in Britain might have prevented the tragedy.

“There is no route into the U.K. for people to actively claim asylum here,” he said. “There’s no way that you can do it unless you actively arrive on U.K. soil.”

While the U.K. does have a refugee resettlement program in place, McNeil likened it to “the claw” in the film Toy Story, referring to an arcade game where a select few toys are plucked out of a machine.

In the wake of Wednesday’s tragedy, some British politicians also echoed calls for the government to change tack.

Zarah Sultana, a Member of Parliament for the opposition Labour Party, said she was “heartbroken” by the deaths.

“Please let this be the moment we provide safe routes to welcome refugees to Britain, instead of endlessly whipping up hate and fear,” Sultana wrote on Twitter.

The criticism comes as the U.K. mulls a new bill aimed at deterring the crossings.

Introduced by Home Secretary Priti Patel in July, the bill is intended to “better protect and support those in genuine need of asylum,” while also deterring “illegal entry into the U.K.” and making it easier to remove “those with no right to be here,” the British government has said.

Patel made clear in the wake of the tragedy that the government would push ahead. A spokesperson for Johnson, meanwhile, told Reuters that providing a safe route for migrants would only add to the factors encouraging people to make the journey.

Naor Hilton said he feared there could be more lives lost if the U.K. does not shift its focus to “empathy and understanding why people take these risks rather than just saying they shouldn’t.”

Wednesday’s tragedy, he said “should be an absolute watershed moment.”

“It should be a line in the sand.”