Biden rallies support for Ukraine in speech from Warsaw: ‘We stand with you’

Home WORLD NEWS Biden rallies support for Ukraine in speech from Warsaw: ‘We stand with you’ 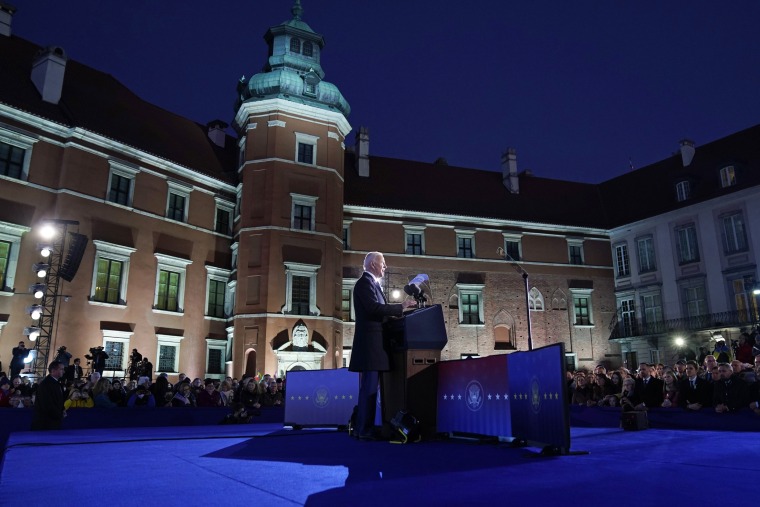 WARSAW, Poland — President Joe Biden framed the war in Ukraine as the battle of a generation in the fight for democracy as he sought to rally the world’s support behind the embattled nation.

“Democracies of the world are revitalized,” Biden said of worldwide reaction to the Russian invasion of Ukraine.

Speaking from a former castle in Warsaw before a crowd that included Ukrainian refugees, Biden blasted Russian President Vladimir Putin and called on the Russian people to choose a different path for their own country. He also urged Europe to end its dependence on Russian gas and unite behind a pressure campaign against Putin.

“It will not be easy, there will be costs,” the president said, as the crowd waved U.S., Ukrainian and Polish flags. “But it’s a price we have to pay. Because the darkness that drives autocracy is ultimately no match for the flame of liberty that lights the souls of free people everywhere.”

“We stand with you,” he said of Ukraine.

Biden attacked Putin for repeatedly claiming ahead of the invasion that he had no intention of entering Ukraine, and blasted him for his brutality since the military assault began. Moments before Biden spoke, the Ukrainian city of Lviv, which had been a relative safe haven within the country, was hit by at least three missile strikes.

“For God’s sake, this man cannot remain in power,” Biden said of Putin.

A White House official said later that the president had not been calling for Putin’s deposal. “The president’s point was that Putin cannot be allowed to exercise power over his neighbors or the region,” the official said. “He was not discussing Putin’s power in Russia, or regime change.”

Secretary of State Antony Blinken reiterated Sunday that the U.S. was not pursuing “a strategy of regime change” in Moscow.

The Kremlin was quick to seize on the remark. “That’s not for Biden to decide,” Putin spokesperson Dmitry Peskov told Reuters. “The president of Russia is elected by Russians.” Russia has for years accused the U.S. and its allies of attempting to carry out regime change in its country.

But Biden also painted a hopeful picture — one where freedom prevails over autocracies and where unity among the Western allies has never been stronger.

“A dictator bent on rebuilding an empire will never be able to erase the people’s love for liberty. Brutality will never grind down the will to be free. Ukraine will never be a victory for Russia, for free people refuse to live in a world of hopelessness, of darkness,” Biden said.

Biden made multiple references to popular historic Polish figures, like Pope John Paul II and former president Lech Wałęsa, and referenced the battles Poland has faced over the years for freedom.

It was a message directed at the Polish people — who filled the streets outside the venue to hear Biden’s remarks — as they find themselves on the frontlines of the refugee crisis and increasingly fearful that they may be Russia’s next target.

“In this hour, let the words of Pope John Paul burn as brightly today, never ever give up hope, never doubt, never tire, never become discouraged. Be not afraid,” Biden said.

Biden also had a message for the Russian people, warning them that Putin’s actions would cut them off from the world and is “taking Russia back to the 19th century.”

“This is not who you are, this is not the future you deserve for your families and your children,” Biden said. “This war is not worthy of you, the Russian people. Putin can, and must end this war.”

Ahead of the speech, Biden met with Ukrainian refugees and aid workers at a sports stadium that once hosted rock concerts and soccer matches. It now provides temporary shelter for refugees, and assistance helping them register for school and work.

At the stadium, a group of refugee women and children gathered around Biden telling him about their experiences, asking him to pray for their male relatives back in Ukraine, and thanking him for the U.S. support. Biden hugged a woman with tears in her eyes and picked up a little girl, clad in pink winter wear, to take a photo with her. The girl’s mother told Biden how her daughter and infant had been sheltering in a basement before making it to Poland.

“I’m always surprised by the depth and strength of the human sprint, I mean it sincerely,” Biden said after meeting with the refugees. “They are an amazing group of people.”

When asked by a journalist about reports of a change in Russian strategy, Biden sounded a skeptical note. “I’m not sure they have,” he said. A Russian general said Friday that forces are shifting away from their countrywide attack on Ukraine and refocusing on the “complete liberation” of the country’s separatist Donbas region.

Biden, asked what he thought of Russian President Vladimir Putin’s actions in Ukraine, was blunt. “He’s a butcher,” said Biden.

The refugee crisis has been ever present throughout Biden’s two days in Poland. As Biden’s motorcade headed to a meeting with Poland’s president Saturday, it rolled past the Warsaw train station where a steady stream of refugees just arriving in the country lined up for food and basic supplies like toilet paper, and sought help with housing and transportation.

While Poland has welcomed the refugees with open arms, and signs of support for Ukraine blanket the city, Polish officials, including the mayor of Warsaw, whom Biden met with on Saturday, have said they are being pushed to the brink trying to help the more than 2 million refugees who have flooded into the country in a matter of weeks.

“We do acknowledge that Poland is taking on a significant responsibility that I don’t think should just be Poland,” Biden told President Andrzej Duda during a meeting Saturday. “It should be the whole world. All nations’ responsibility.”

Biden also provided reassurances to Duda that if Russia were to attack Poland, the U.S. would come to its defense as part of its commitment under the NATO alliance.

Biden’s speech capped three days in Europe, where he held what could be some of the most consequential meetings of his presidency with world leaders, seeking to solidify their unity behind a sustained pressure campaign against Russia.

The White House had said it hoped Biden’s speech would help unite support for the Ukrainian people, hold Russia accountable and frame the conflict as a larger battle for democracy.

The U.S. announced a series of steps this week to try to ratchet up pressure on Russia and assist Ukraine, including additional sanctions on more than 400 Russians and Russian entities, $1 billion in humanitarian assistance, plans to take in 100,000 Ukrainian refugees, and a task force to lessen European dependence on Russian natural gas.