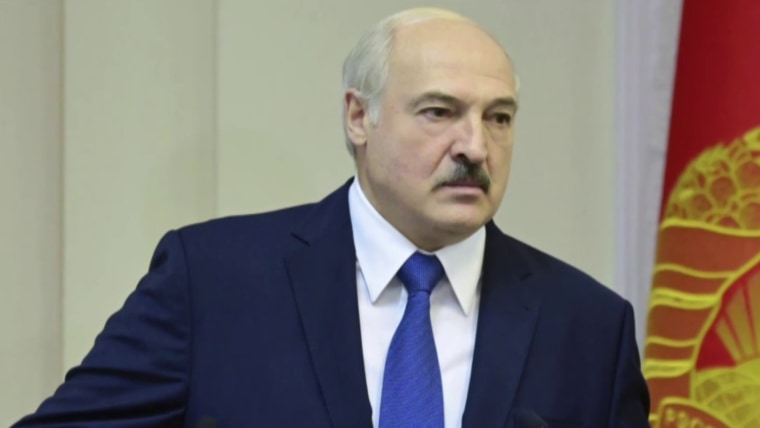 “Piracy,” “hijacking” and “state terrorism” — the condemnation of Belarus was swift and strong after it forced the landing of a commercial airplane carrying an opposition journalist.

In a show of unified fury, the United States, Britain, the European Union, NATO and the United Nations on Monday lined up to call out the action in the skies above the eastern European country led by Alexander Lukashenko, often referred to as Europe’s last dictator.

“We strongly condemn the Lukashenka regime’s brazen and shocking act,” Secretary of State Antony Blinken said Sunday, using an alternative spelling for Lukashenko and noting that American passengers were on board the flight.

“We demand an international investigation and are coordinating with our partners on next steps. The United States stands with the people of Belarus,” he added.

“This was a shocking act of diverting a flight between two EU member states for the apparent purpose of arresting a journalist. It constitutes a brazen affront to international peace and security by the regime,” Psaki said.

Psaki said President Joe Biden had been briefed on the episode earlier Monday morning and National Security Adviser Jake Sullivan “raised our strong concerns on this issue, the actions of the government of Belarus” with his Russian counterpart during a meeting Monday. Russian President Vladimir Putin has been supportive of Lukashenko.

Psaki declined to say whether the White House considered it safe for U.S. airlines to fly in Belarus airspace.

E.U. Commission President Ursula von der Leyen tweeted Sunday that “the outrageous and illegal behavior of the regime in Belarus will have consequences.”

Former President of the European Council Donald Tusk labeled the incident an “act of state terrorism.”

The chorus of international ire follows the forced landing in Minsk, the Belarusian capital, of a Ryanair flight on Sunday carrying key opposition blogger Roman Protasevich. Protasevich was detained on arrival, officials and rights activists said.

The commercial Ryanair passenger plane was traveling from Greece to Lithuania when a Soviet-era MiG-29 fighter jet was nearby and Belarusian authorities flagged what turned out to be a false bomb alert to force the aircraft to land.

Protasevich, 26, works for the Poland-based online news service NEXTA and is wanted in Belarus for broadcasting mass protests against Lukashenko last year via the Telegram messenger app.

According to passengers on the jet who spoke to Reuters, Protasevich held his head in his hands and looked sad and scared on landing. He also appeared to pass his laptop and mobile phone to a female companion, while authorities were later seen taking Protasevich into custody on arrival in Minsk.

It’s unclear what charges or jail terms Protasevich could face, but Belarus remains among a handful of countries in Europe to administer the death penalty.

“While it sounds like an extraordinary Hollywood plot, it’s not. The reality of this apparent act of air piracy is chilling,” Marie Struthers, human rights group Amnesty International’s Eastern Europe and Central Asia director said in a statement.

Struthers said the European Union and “the rest of the world must react without delay” in calling for Protasevich’s immediate release.

A spokesman for the Belarusian Ministry of Foreign Affairs, Anatoly Glaz, batted away what he called “bellicose” statements from the West on Monday and said the government’s actions complied with international law.

The E.U. has already imposed three rounds of sanctions on Belarus in response to last year’s contested presidential election. Some European politicians are now calling for tougher next steps, among them the suspension of E.U. airlines flying over Belarus and a ban on Belarusian airlines from landing at E.U. airports.

But the E.U. will also have to tread carefully to avoid pushing Lukashenko into even closer ties with key ally, Russia.

So far, Russian President Vladimir Putin has not commented but the editor-in-chief of state-controlled Russia Today tweeted that Lukashenko had “performed beautifully.”

Kremlin spokesman Dmitry Peskov told reporters Monday he would not be commenting on the incident. Russian Foreign Minister Sergei Lavrov said during a separate press conference on Monday that Russia was “in favor of assessing this situation not in a hurry, not in a rush.”

A Latvian airline, airBaltic, became the first on Monday to announce it would no longer fly over Belarusian air space.