Beginning of the end? Britain becomes first to roll out clinically approved vaccine 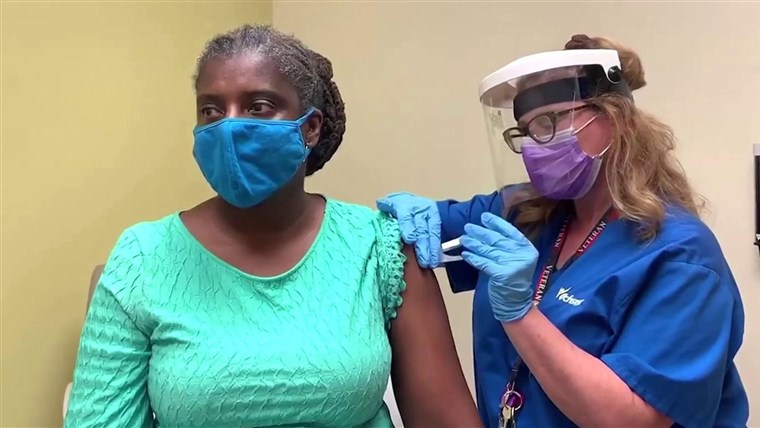 LONDON — At 6.31 a.m. on Tuesday, 334 days after the first reported Covid-19 death in China, Margaret Keenan, 90, became the first person in the world to receive a clinically approved vaccine.

It was a landmark moment in the global fight against the most destructive pandemic in 100 years. In approving and delivering the BioNTech-Pfizer vaccine, Britain is forging a path that will likely be followed by the United States and Europe in the coming weeks.

“I feel so privileged to be the first person vaccinated against Covid-19,” said Keenan, who was given the vaccine at University Hospital in Coventry, a city northwest of London.

For all the buildup, it was a shot like any other. Nurse May Parsons asked Keenan to “relax your arm for me,” before inserting the needle and finishing with a reassuring but routine “all done.” Then came the volley of camera flashes and applause.

“It’s the best early birthday present I could wish for,” Keenan, a grandmother of four who turns 91 next week, told reporters. “It means I can finally look forward to spending time with my family and friends in the new year after being on my own for most of the year.”

“My advice to anyone offered the vaccine is to take it,” she said. “If I can do it, so can you.”

For many, seeing these shots injected into Britons’ shoulder muscles will come as a much-needed morale boost at the end of a hellish year globally — one that’s seen 1.5 million people killed, 65 million others sickened, and countless more subjected to economic hardship.

Symbolism aside, the reality is that even wealthy countries such as the U.S. and the United Kingdom face an enormous logistical challenge in trying to vaccinate priority groups — let alone everyone else.

“This feels like the beginning of the end,” professor Stephen Powis, the National Health Service’s national medical director, said Sunday ahead of the rollout. “But, of course, it is a marathon, not a sprint, and it will take many months to vaccinate everybody who needs vaccination.”

NHS England Chief Executive Sir Simon Stevens added, “Less than a year after the first case of this new disease was diagnosed, the NHS has now delivered the first clinically approved Covid-19 vaccination — that is a remarkable achievement.”

Americans will likely not be far behind, with the Food and Drug Administration expected to meet in days to discuss BioNTech-Pfizer’s application for emergency use authorization. Next week, the FDA will meet to rule on another vaccine, made by Moderna.

The Chinese and the Russian governments have given emergency approval to several of their vaccines. But these are all still going through Phase 3 trials or have scant publicly released data.

In Britain, with a population of some 67 million, the rollout is the start of the biggest and most challenging vaccination program in the history of the publicly funded National Health Service.

It has purchased 40 million doses. But the first batch delivered from Pfizer’s plant in Belgium only contains around 800,000 — enough for 400,000 people taking two doses each.

It needs to be kept at supercold temperatures and handled with extreme care, so its rollout will be limited to 50 hospital “hubs” where there is specialist storage equipment.

First in line will be anyone over the age of 80 who is already in hospital.

Keenan, known to friends as “Maggie,” is a retired jewelry shop worker who’s lived in Coventry for 60 years and grew up in Enniskillen, Northern Ireland. Like many seniors she’s been isolating for most of this year.

“It’s a huge honor to be the first person in the country to deliver a Covid-19 jab to a patient,” said Parsons, a nurse who has worked for the NHS for 24 years and is originally from the Philippines. “I’m just glad that I’m able to play a part in this historic day.”

The second patient to receive the vaccine at the hospital was named William Shakespeare, a detail that soon became the top trending topic on Twitter, where people traded puns such as “The Taming of the Flu” and “The Two Gentlemen of Corona” — references to works by the playwright.

The vaccinations will earn a line in the history books for Coventry, a former industrial powerhouse that endured heavy bombardment in World War II and the shuttering of its auto plants that once earned it the title of Britain’s “motor city.”

Nursing home staff and some front-line health care workers will also get the vaccines, although exactly who makes the initial cut has already prompted heated debate in what has often been a vague and seemingly disorganized process.

It’s also been impossible to disentangle what should be a global fight from the impulses of national politics. Critics accused Prime Minister Boris Johnson’s Conservative government, which is simultaneously trying to negotiate a Brexit deal, of using its world-first vaccine announcement to promote nationalist or even jingoistic politics.

Education Secretary Gavin Williamson said last week that Britain’s rapid vaccine approval showed the U.K. is “a much better country” than the U.S., France and Belgium. And Health Secretary Matt Hancock has dubbed Tuesday as “V Day” — short for Vaccine Day, but also referencing “V-E Day,” which marked the surrender of Nazi Germany in 1945.

Some experts worry that the news will cause people to become complacent, compounding an already tough winter of restrictions, economic pain and the grim routine of daily death tolls.

“No one can discount the importance of the hope that this rollout will generate,” Mukesh Kapila, a former adviser to the World Health Organization’s director general, said. “But it isn’t going to mean we can stop lockdown restrictions anytime soon.”

Meanwhile, Covid-19 is killing more people than ever — the U.S. averaged 1,826 daily deaths last week, one every 45 seconds. Europe’s cases have slowed following widespread lockdown restrictions, but still places such as the United Kingdom and Spain have among the highest numbers of deaths per capita in the world.

The vaccine will do nothing for the grieving relatives of those who died. It will not comfort business owners whose companies have already collapsed. And it won’t repay the lost wages of unemployed workers, nor ease the hardship endured by so many.

Supplies will be tight. Federal officials plan to ship 6.4 million doses within 24 hours of FDA authorization and up to 40 million doses by the end of the year. Most of these will go to the 21 million health care workers and 3 million nursing home staff in the U.S.

But the 0.3 milliliters of liquid in these syringes contains not just a groundbreaking modern medicine, but also a thread of hope in an unrelentingly bleak year.