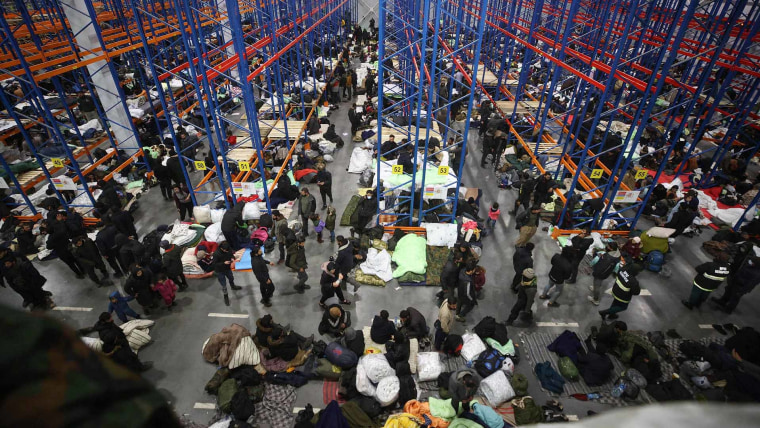 BAGHDAD — The deadly crisis Belarus was accused of creating at its border with Europe appeared to subside this week, raising hopes of an end to what had become a spiraling confrontation between East and West.

Yet as those who risked the journey in the hope of a better future returned to Iraq with their dreams frustrated, some described being violently beaten by security forces on both sides and enduring days without food or water in freezing conditions.

Several would-be asylum seekers who spoke to NBC News at the airport in Baghdad said they would never attempt the journey again, and warned others not to follow their lead.

They were among hundreds of Iraqis flown home Thursday from Minsk, while the main camps at the frontier with Poland were also largely cleared, according to Belarusian state media.

The apparent climbdown from Belarusian strongman Alexander Lukashenko came after weeks of pressure from the United States, NATO and European leaders who accused him of flying in thousands of people from the Middle East and pushing them to attempt to illegally cross the border into the European Union.

But it was unclear what would happen to the scores of migrants now relocated to temporary housing facilities, while Polish authorities accused Belarus of a renewed effort on Friday to push crowds to the border.

Speaking with NBC News on Thursday after landing at the Baghdad International Airport on a flight from Minsk, Hussein Saadi Ahmed, 25, said he had sought to flee Iraq due to a worsening economic and security situation.

“Life here is difficult and we cannot find suitable jobs,” he said.

Like other asylum seekers, Ahmed, a law school graduate, said he spent around $3,000 to get to the border, acquiring a tourist visa through a tour company to reach Belarus.

Once they got there, asylum seekers said Belarusian forces helped them reach the border, but left them to fend for themselves, navigating thick swamp-filled forests in freezing temperatures, where they were trapped for days without water and food.

The harsh conditions “had a bad effect,” Ahmed said — especially on the families, including young children, who risked the journey.

And when asylum seekers came close to reaching E.U. soil, many said they were beaten back by Polish forces — only to then face further violence when they tried to return to Belarus.

“I lived for three days without food and water, and we had to drink water from the dirty swamps,” Ahmed said. “And when we tried to cross the border, we were severely beaten by the Polish forces…When we tried to return, we were again beaten.”

Ahmed said he wanted to warn others not to risk the journey “because it is never possible to cross to the Polish border.”

“After going through this experience, I decided not to do it again,” he said.

Muhammad Hadi, 30, who says he spent around $5,000 on the journey, agreed, telling NBC News: “I have no intention of migrating in this way again after the suffering I went through within a week of leaving the country.”

Hadi, an anthropology graduate, also described violence at the border.

NBC News has contacted Poland’s interior ministry, as well as the Belarusian government, but has not heard back from either.

In a statement shared with NBC News on Friday, Belarus’s embassy in the U.K. said “Belarus is also concerned about the current tense situation on its borders with Poland, Lithuania and Latvia,” which it said “has been exacerbated by Western politicians’ constant demonstrations of readiness to accept migrants on humanitarian and economic grounds, which serve only to encourage and reassure potential asylum seekers.”

It said that “taking into account the E.U.’s total inaction and given the onset of cold weather, the President of Belarus has made a decision to take care of the children and women, by providing them with safe conditions on the territory of Belarus.”

‘A nice word instead of violence’

For months, humanitarian organizations have been sounding the alarm about the plight of a growing number of migrants and asylum seekers at the borders that Poland and neighboring Lithuania and Ukraine share with Belarus.

Lukashenko, the authoritarian leader who is a key ally of Russian President Vladimir Putin, has denied fomenting the crisis as a retaliation against European sanctions on his regime.

Lukashenko repeated the denials in an interview with the BBC Friday. But, asked if Belarusian troops were helping migrants cross into the E.U., he said: “I think that’s absolutely possible. We’re Slavs. We have hearts.”

“Maybe someone helped them. I won’t even look into this,” he added.

On Thursday, State Secretary Antony Blinken said the U.S. would be keeping a close eye on the situation at the Belarus-Poland border.

“It is profoundly unconscionable that Lukashenko and Belarus have sought to weaponize migration,” Blinken told reporters during a visit to Nigeria, according to Reuters. He also warned that the U.S. had the authority to add sanctions if deemed necessary.

While Lukashenko, Putin and Western officials traded accusations, some in the region took matters into their own hands.

Katarzyna Staszewa, an activist working for a Polish grassroots Grupa Granica, a collection of nonprofit organizations delivering aid, told NBC News in a phone interview earlier this week that many who risked the journey were in “bad condition,” with some having “spent 20, even 30 days in the woods.”

Since September, journalists, activists and human rights workers have largely been blocked from reaching the border after Poland enacted a state of emergency.

The move made it virtually impossible to render humanitarian assistance and left the rest of the world relying on the often conflicting accounts of Polish and Belarusian officials.

Staszewa’s group worked to deliver food, water, medical aid and warm clothes to migrants who manage to make it through to Poland.

“Sometimes they are so desperate, so alone, so depressed that they are just reaching out to ask us to be with them, so that they can meet someone who can offer a nice word instead of violence,” she said.

While she said the Belarusian regime was “instrumentalizing” migrants for political gain, she said it’s also the responsibility of Poland, the European Union and international community to help them by granting asylum to those people who qualify.

The E.U. promised Wednesday it would send about $800,000 worth of food, blankets and other aid to migrants at the border, after criticism it had done too little to help those who saw the bloc as a place where they could enjoy a better future.

Maciej Szczęsnowicz, a Muslim community leader in the eastern Polish village of Bohoniki, also rushed to support the migrants and provide them with food and support.

While much of the focus has been on the Polish-Belarusian border, asylum seekers have also described being taken to the Lithuanian border by Belarusian forces.

Two of those returning to Iraq on Thursday said they had tried to reach Poland, but were apprehended by Belarusian forces and taken to the Lithuanian border instead.

Both said Belarusian forces removed the SIM cards from their phones and broke them, so they had no way of reaching others.

“Leaving us without water and food, I found myself forced to drink from the water of the swamps,” Ali Kazem Hussein, 21, said. “At one point I expected that my end would be there.”

Hussein, who said he wanted to leave Iraq to “secure my future and build a family,” warned against viewing Belarus as a gateway to the E.U., saying “my advice, especially to Iraqi youth, is not to take this step because it is an experience full of risks.”

“If I had the opportunity to immigrate again, I would do so,” he added.

“But not through Belarus.”