Anger towards London police grows after clashes at vigil for slain U.K. woman 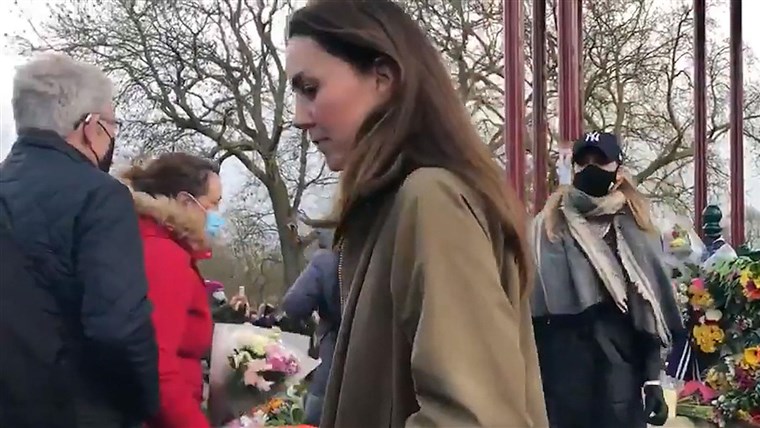 LONDON — Clashes between officers from London’s Metropolitan Police and crowds at a vigil for a slain woman have led to widespread criticism for the force from activists and politicians across the spectrum.

Hundreds of people gathered in a south London park Saturday to pay tribute to Sarah Everard, 33, whose disappearance and death has gripped the nation and sparked a national conversation about violence against women.

A vigil had been organized Saturday by women’s rights group, Reclaim the Streets, but it later canceled the event when a judge refused to intervene in a legal challenge over their right to gather during coronavirus restrictions. Only two people from different households are currently allowed to meet in a public space in the U.K. while bars, restaurants and most stores remain closed.

However, hundreds of people showed up at the park. Many brought flowers and some held signs saying: “She was just walking home.” Among them was Kate Middleton, the Duchess of Cambridge.

As the sunlight faded, the previously peaceful mood turned and police officers grabbed several women in the crowd, pulling them away and hancuffing them.

Some in the crowd booed, jeered and shouted “shame on you” at police officers patrolling the event and small minority of people began chanting at officers, pushing and throwing items, Metropolitan Police Assistant Commissioner Helen Ball said in a statement early Sunday.

Four people were arrested, she said.

“We absolutely did not want to be in a position where enforcement action was necessary,” Ball added. “But we were placed in this position because of the overriding need to protect people’s safety.”

But the police’s actions were widely criticized.

London’s Labour Party Mayor Sadiq Khan said on Twitter that while officers had a responsibility to enforce Covid-19 restrictions at the rally, it was clear their response was “at times neither appropriate nor proportionate.”

Calling the scenes “upsetting,” the U.K.’s Conservative Home Secretary Priti Patel said in a statement that she had demanded a full report on what happened from the force.

On Twitter, the leader of the opposition Liberal Democrats, Ed Davey, called Ball’s comments tone deaf. “Doubling down” was not the right response, he said.

Reclaim the Streets said in a statement that they were “deeply saddened and angered” by police response, adding that the force should have understood that women would need a place to reflect, show solidarity and mourn Everard’s death.

The marketing executive vanished while walking home from a friend’s house on March 3. Her body was found hidden in an area of woodland in Kent, more than 50 miles southeast of London, on Wednesday.

Her disappearance sent shockwaves through the nation and thousands of women took to social media to talk about harassment they had been subjected to, safety issues and the criminal justice system’s failure to prosecute offences committed against women.

A recent report for U.N. Women, a body for gender equality and the empowerment of women, showed that more than 70 percent of women of all ages in the U.K. have experienced some form of sexual harassment in a public space.

Everard’s case has resonated with women across the world because what happened to her was the worst case scenario, Jamie Klingler of Reclaim These Streets, told NBC News Saturday.

“It’s the absolute fear that you could do everything right and still end up in the worst situation because a man perpetrated this violence on you,” she added.

The Associated Press and Reuters contributed to this report.