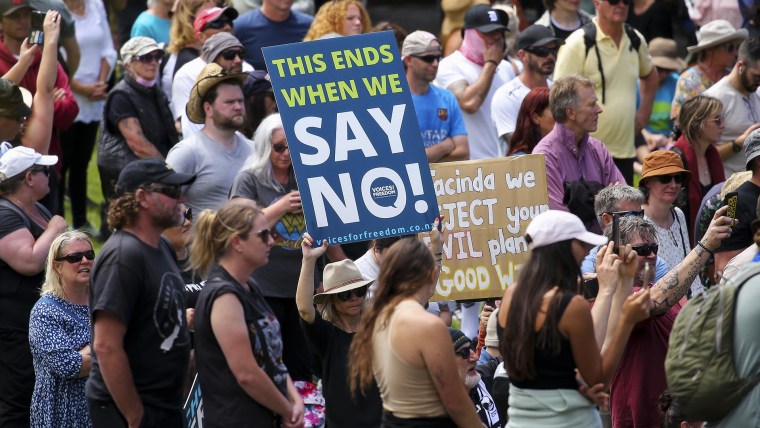 CHRISTCHURCH, New Zealand — When Josephine Bartley, a councilor in Auckland, New Zealand, heard that a local Covid-19 vaccination clinic had been vandalized in early November, she drove over to survey the damage. After speaking to the owners and helping them connect with local law enforcement, she noticed three men loitering near her parking spot.

“Some guys were standing around my car just staring at me,” she told NBC News by telephone and email last week.

“One of them called me scum,” she said, and suggested they damage her vehicle. The men then entered a four-wheel drive and left. While the labour party councilor said she did not know if the trio were linked to the vandalism of the health center, which primarily serves the local Pacific community, the experience left her shaken.

“I was confused, I was trying to figure out who was ‘scum’ — was it brown people? Was it Labour, was it Council? Was the vaccination? Was it women? But I was concerned for my safety,” Bartley said. The police “advised me not to use my car and lay low for a few days,” she said.

As New Zealand shifts to a policy of “living with the virus,” residents accustomed to living virtually Covid-free for most of the pandemic are being confronted by rising case numbers and widening vaccine mandates. Opposition to vaccination as well as frustration with ongoing pandemic restrictions is fueling a small but vocal protest movement inspired in part by American politics.

In a working paper published in November, a team of researchers in New Zealand said there had been a “sharp increase in the popularity and intensity” of disinformation around Covid-19 since August, when an outbreak driven by the highly transmissible delta variant of the virus that is responsible for the vast majority of New Zealand’s cases began.

The researchers said the disinformation was “being used as a kind of Trojan horse” to coax New Zealanders from vaccine hesitancy to vaccine resistance, and then to the embrace of far-right ideologies like white supremacy and extreme misogyny. Some of the most extreme content, they said, comes from overseas, particularly Australia and the United States.

Bartley said that before the incident at the vaccination clinic there had been a surge in online abuse from New Zealanders directed at her office as well as the clinic.

“I got sent a video with an American anti-vaxxer saying, ‘If you support vaccinations you’re going to hell,’” she said.

NBC News has also seen Telegram messages from Shane Chafin, an American resident of New Zealand disclosing the personal cellphone number of a pharmacist who criticized his anti-vaccine broadcasts, in which he appeared to encourage followers to harass her in retaliation. NBC News has approached Chafin for comment.

Chafin works for “Counterspin Media,” a New Zealand-based news site hosted by GTV, a company founded by former Trump strategist Steve Bannon. In November, a press conference by Prime Minister Jacinda Ardern was suspended after Chafin heckled her about vaccinations.

At anti-lockdown and anti-vaccine protests in cities like Wellington and Christchurch, “Make America Great Again” hats and flags from the QAnon conspiracy theory movement are visible among the crowds. Sam Brett, a student at the University of Canterbury who attended recent protests for his doctoral research, said they felt like a “miniature, New Zealand version of a Trump rally.”

They have also co-opted the language and culture of New Zealand’s Indigenous Maori, even as related discourse online promotes anti-Maori racism, said Sanjana Hattotuwa, a research fellow at the University of Auckland and one of the working paper’s authors.

“Maori identity, symbols, history, culture, narratives and specific individuals are being appropriated by white-supremacist accounts and actors, especially on Telegram,” an app that can serve as an alternative social media platform, allowing greater anonymity and less stringent community rules than sites like Twitter.

Those symbols include the Maori flag and the “Ka Mate” haka, a ceremonial dance known globally for its performance before matches by New Zealand’s All Blacks rugby team.

In a statement in November, Ngati Toa, a Maori tribe recognized by the government as having legal rights over the dance, asked protesters to stop using it “immediately.”

“We are absolutely clear that the Covid-19 vaccine is the best protection we have available to us,” Helmut Modlik, the tribe’s chief executive, said in the statement.

In its statement, the tribe singled out Brian Tamaki, an anti-lockdown firebrand who leads a group called the Freedom and Rights Coalition, saying it had been alerted that he planned to teach the haka to protesters for future performances.

Tamaki, who is out on bail after multiple arrests over his appearances at anti-lockdown protests in defiance of court orders and public health controls, did not respond to requests for comment.  But Martin Daly, a member of the Pentecostal church Tamaki leads who is also active in the Freedom and Rights Coalition, said he disagreed with the tribe’s directive.

“There’s a lot of Maori iwi [tribal] leaders in our movement, up in the North Island, and they’ve said they’re speaking completely out of line,” he said.

Maori tribes are all the more frustrated because they are less likely to be vaccinated than other New Zealanders and have been disproportionately affected by the delta outbreak.

Hone Harawira, a Maori rights advocate and former lawmaker, said he respected people’s right to protest, but “not when that protest endangers the health and well-being of our whanau,” a Maori-language word for family and community.

Harawira condemned Tamaki’s activity and called on Maori to confront what he perceives as the far-right themes in parts of the protest movement, specifically “their anti-vax games, the Trumpist rhetoric, their hatred and their basic racism as well.”

New Zealand’s national security advisers have warned that individuals radicalized by their exposure to extremist online content during the pandemic could resort to violence, media outlet Newshub reported in November. Security measures for government officials have been stepped up in recent weeks.

Paul Buchanan, an Auckland-based security analyst and former consultant to U.S. intelligence services, said he was concerned by the “importation of U.S.-style populist rhetoric” into New Zealand’s anti-vaccination movement, characterizing it as “tinged with violence and vulgar, dehumanizing disrespect for political and social opponents.”

“When you reduce the quality of discourse down to street-fighting level,” he said, it can raise the risk of violence.

Daly said that fears of extremists among the protest movement were misplaced, arguing it was an expression of broadly felt concerns about the erosion of civil liberties.

“It’s about freedom of movement, to be able to gather, freedom of speech,” he said. “The removal of freedoms is our big issue; we’re not anti-vax, we’re more pro-choice.”

On Nov. 9, as thousands gathered outside Parliament in Wellington to protest lockdowns and vaccine mandates, Ardern said she was aware of the opposition but did not think it was representative of public views.

“Regardless of your position, there’s a place for everyone’s voice to be heard,” she said later. “Please just make it kind.”