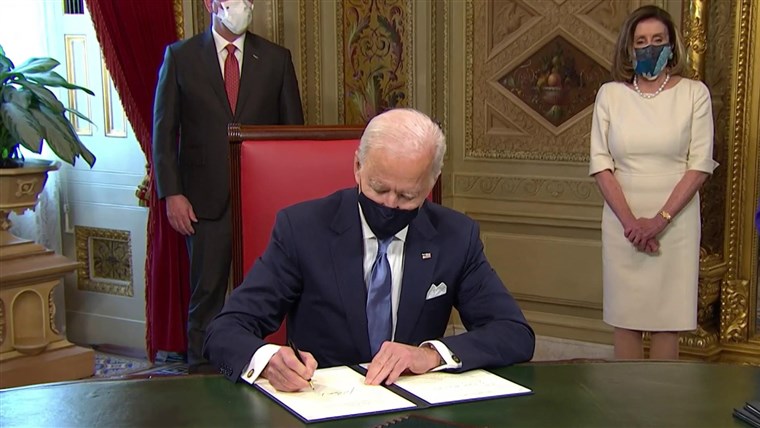 LONDON — It was a sigh heard round the world

With almost palpable relief, longstanding American allies welcomed Joe Biden as he was sworn in as the 46th president of the United States on Wednesday. Some signaled hopes for a radical change in the White House, particularly in its approach to climate change and the coronavirus pandemic. And a few took parting shots at Donald Trump and his nationalist, “America first” agenda.

The European Union’s top politician, Ursula von der Leyen, said that “after four long years, Europe has a friend in the White House.”

“This time-honored ceremony on the steps of the U.S. Capitol will be a demonstration of the resilience of American democracy,” she added in a speech in Brussels.

Then he took aim directly at the former president.

“Five years ago, we thought Trump was a bad joke, but five years later we realized he jeopardized nothing less than the world’s most powerful democracy,” he said in a speech.

References to tensions between Europe and the U.S. under Trump, who accused the European Union of trying to take advantage of America and said European allies “never treated us well,” were a striking departure from past congratulatory messages.

But they reflected the alarm that many on the continent felt as Trump broke with longstanding norms and made common cause with the far right — alarm that turned into horror as the insurrectionist mob encouraged by Trump overtook the Capitol on Jan. 6.

German President Frank-Walter Steinmeier echoed these concerns as he said he was “greatly relieved” and suggested that many of his fellow countrymen felt the same way.

“Despite all the joy we feel today, we must not forget that even the most powerful democracy in the world has been seduced by populism,” he said as Biden prepared to be sworn in. “We must work resolutely to counter polarization, protect and strengthen the public square in our democracies, and shape our policies on the basis of reason and facts.”

Calling it a “significant day for the American people,” French President Emmanuel Macron tweeted that his country was “together” with them.

“We will be stronger to face the challenges of our time. Stronger to build our future. Stronger to protect our planet,” he said, before welcoming the U.S. back to the Paris Agreement on climate change.

Some world leaders — particularly those who had closer relations with Trump — issued more standard statements of congratulations.

British Prime Minister Boris Johnson said, “America’s leadership is vital on the issues that matter to us all, from climate change to Covid.” Israeli Prime Minister Benjamin Netanyahu said he had “a warm personal friendship going back many decades” with Biden.

Congratulations to @JoeBiden on being sworn in as President of the United States and to @KamalaHarris on her historic inauguration. America’s leadership is vital on the issues that matter to us all, from climate change to COVID, and I look forward to working with President Biden.

Officials in China, which saw relations with the U.S. sour dramatically over the past four years, were more circumspect, with Foreign Ministry spokeswoman Hua Chunying saying that Beijing hoped Biden would push “relations back to the right track as soon as possible.”

For some American rivals, the inauguration Wednesday was less a moment to congratulate Biden and more an opportunity to lay into Trump and his foreign policies.

Iranian President Hassan Rouhani also urged the incoming administration to return to a 2015 nuclear agreement and lift sanctions on Tehran, while welcoming the end of “tyrant” President Donald Trump’s era.

“The ball is in the U.S. court now. If Washington returns to Iran’s 2015 nuclear deal, we will also fully respect our commitments under the pact,” Rouhani said in a televised Cabinet meeting.

Fawzi Barhoum, a spokesman for Hamas, the Palestinian Islamist militant group that governs the blockaded Gaza Strip, said Trump had been “the biggest source and sponsor of injustice, violence and extremism in the world and the direct partner of the Israeli occupation in the aggression against our people.”

The Associated Press and Reuters contributed to this report.