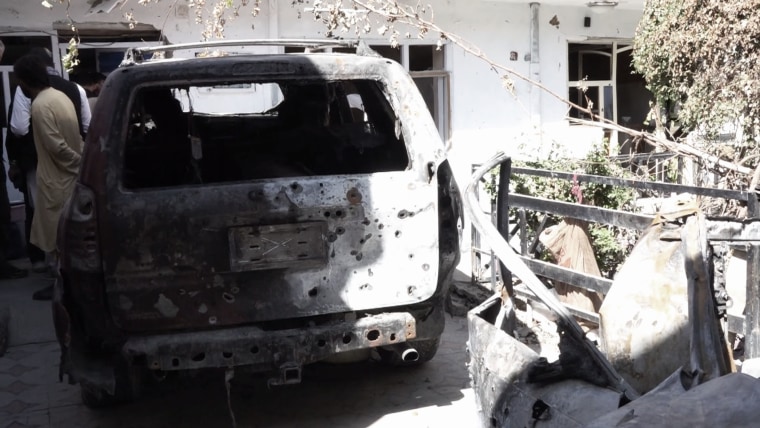 For the United States, Friday’s apology for a drone strike that killed 10 innocent civilians in Afghanistan last month was a rare admission of a deadly and damaging mistake.

For the family still reeling from their loss, it was far from enough.

“No one (has contacted) with us to apologize,” Emal Ahmadi, whose toddler Malika was among seven children killed in the August 29 blast, told NBC News Saturday.

Ahmadi said he was surprised to hear that the U.S. had offered publicly apologized for the incident, since he had yet to hear from a single official himself.

However, he also said that an apology would not suffice. “I lost ten members of our family and the U.S. should pay,” he said.

“(The) U.S. should pay compensation for us and should transfer us from Kabul.”

Of course, said Ramin Yousuf — a cousin of Ahmadi who served as a military instructor with Afghan forces before the Taliban took control of Kabul — what the family really wants is their loved ones back.

“In one minute, we (lost) everything,” said Yousuf, 31. “What pain does this apology cure?”

But, he added: “We have no choice but this.”

He also said his family fears it could be targeted by the Taliban after speaking out about their situation, fueling their desperation to get out of Kabul.

Both Yousuf and Ahmadi said that if given the chance, they would still wish to seek refuge in the U.S. despite the country’s role in their family’s devastation.

“We don’t have another choice in this situation,” Yousuf said.

But first, he said, U.S. officials should call his family directly and “apologize (to the) mother of every child” killed in the strike.

NBC News has reached out to the Pentagon for comment.

Gen. Kenneth McKenzie, the head of U.S. Central Command, claimed full responsibility Friday for what he said was a devastating “mistake.”

Recounting how the drone strike had been launched in the chaotic hours after a deadly suicide bombing near Kabul airport, McKenzie said the operation had been meant to prevent another attack from unfolding.

In the days since, he said, the U.S. has determined that “it is unlikely that…those who died were associated with ISIS-K.”

That acknowledgment was initially all that the Ahmadi family wanted after their names suddenly became tied to ISIS-K in the wake of the devastating drone strike.

On the day of the deadly event, Ahmadi’s cousin, Zemari Ahmadi, an aid worker employed by a U.S.-based nonprofit working to address malnutrition in the country, had just pulled up at home from work as his youngest son Farzad, 13, raced out to greet him.

Farzad had recently learned how to drive and wanted to help park his father’s car, but the vehicle was struck by the U.S. drone, killing father and son along with eight other family members.

An investigation by The New York Times found some of Ahmadi’s everyday actions on the day of the strike may have been misinterpreted by U.S. military surveillance, with water canisters mistaken for explosives.

Ahmadi said his daughter Malika and two other toddlers were the youngest family members killed, along with his nephews Arwin, 7, and Benyamin, 6, and Zemari’s two other sons, Zamir, 20, and Faisal, 16.

Remembering his niece Sumaia, 2, who was killed in the blast, Yousuf said: “My father said she will be a genius in the future. But unfortunately, we lose our small genius from our family.”

Ahmad Naser, a former Afghan Army officer who had worked as a contractor with the U.S. military, was also killed in the blast, Yousuf previously told NBC News.

Naser had been just days away from marrying Zemari’s daughter, according to Yousuf. He said the family had planned to hold a small wedding that week, with Naser also hopeful that he would be able to get some of the family onto one of the last evacuation flights out of Kabul to the U.S.

Instead Zemari’s family and friends were left to defend his character as the U.S. defended what it initially described as a “righteous strike.”

Zemari, they insisted, was no terrorist but a good man who harbored no ill will toward America.

He worked as a technical engineer for Nutrition and Education International, a nonprofit based in Pasadena, California.

Now, with Zemari’s name finally cleared, the Ahmadi family says it wants to be compensated.

“You know we (have lost our) government, job, education, money, our family members, our (comfortable) life. Sometimes I think that I am asleep,” Yousuf said, describing life in the wake of both the drone strike and the Taliban’s takeover of Afghanistan.

McKenzie said on Friday that the U.S. was “considering ex gratia or reparations” for the deadly incident and that the Pentagon was “in consultation with the office of the Secretary of Defense to determine a way forward there.”

However, he added, “as you will understand, it’s very difficult to reach out on the ground in Afghanistan, to actually reach people.”

“The U.S. must now commit to a full, transparent, and impartial investigation into this incident,” said Brian Castner, a senior crisis adviser with Amnesty International.

Rep. Adam Schiff, D-Calif, suggested there would be a hearing on what he called “a mistake with horrific consequences.”