Von Miller hints at a Broncos return: ‘I kinda want that old thing back’

Home Sports Von Miller hints at a Broncos return: ‘I kinda want that old thing back’ 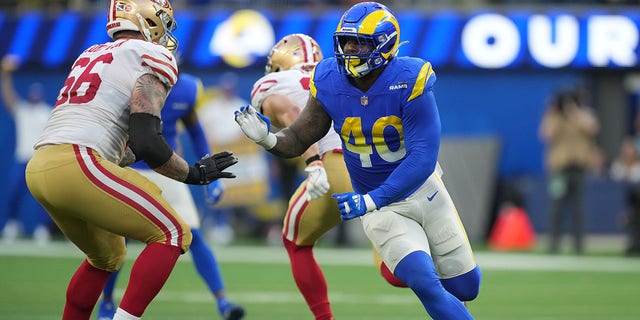 Von Miller was traded to the Los Angeles Rams and played a key role for the team during their Super Bowl run in 2021. With that said, the former Super Bowl MVP could be playing elsewhere next season.

A week before free agency kicks off, Miller hinted at a potential return to the Denver Broncos by posting an Instagram photo of himself from his career with the franchise on Monday afternoon. The three-time All-Pro edge rusher also has interest from the Rams, and Los Angeles Chargers and Green Bay Packers as well, according to Pro Football Network.

Miller, who racked up nine sacks in 12 games with the Rams, could make up to $20 million per year on a new contract. The Chargers could lose out on linebacker Uchenna Nwosu and make a run at Miller to pair him with Joey Bosa. The Packers, on the other hand, could not resign other pass rushers to save salary cap space, and the Broncos need someone to team up with Bradley Chubb.

Von Miller #40 of the Los Angeles Rams looks on against the Tennessee Titans during the first quarter at SoFi Stadium on Nov. 7, 2021 in Inglewood, California. (Photo by Harry How/Getty Images)

Pro Football Network reported that the reunion with the Broncos “isn’t necessarily Miller’s first choice in free agency.” In the photo he posted, Miller had two separate pictures of himself in a Broncos uniform, and he asked his fans if he should wear his old No. 58 jersey or his new No. 40 uniform he wore with the Rams. And then on Twitter, Miller teased a Broncos return again.

“I kinda want that old thing back,” Miller wrote, adding “5280” — which is a reference to Mile High City’s elevation above sea level.