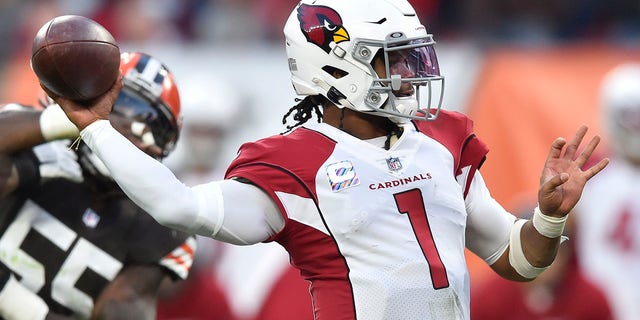 The Arizona Cardinals are on their way to a win over the Cleveland Browns on the road, but the game couldn’t end before we witnessed the worst call we’ll all see this week. Murray gets rid of a ball 15-20 yards down the field to eventually be touched by Browns defensive tackle Malik Jackson —

Roughing the passer was called. And to make matters worse, Jackson was pushed into Murray, which was the only reason there was any physicality to this play in the first place.

We all get the pro-quarterback rules that’ll protect the longevity of QB’s late into their 30’s, but we’re going too far. This is still supposed to be football that is considered the most physical sport in the world outside of rugby and hockey, depending on who you ask.

Arizona Cardinals quarterback Kyler Murray (1) throws under pressure from the Cleveland Browns during the first half of an NFL football game, Sunday, Oct. 17, 2021, in Cleveland. (AP Photo/Ron Schwane)

New rules come about for good reason, however NFL commissioner Roger Goodell has to find more effective ways to implement them. This is becoming a joke…