Scottie Pippen assails Michael Jordan, ‘The Last Dance’ in new book: ‘I was nothing more than a prop’

Home Sports Scottie Pippen assails Michael Jordan, ‘The Last Dance’ in new book: ‘I was nothing more than a prop’ 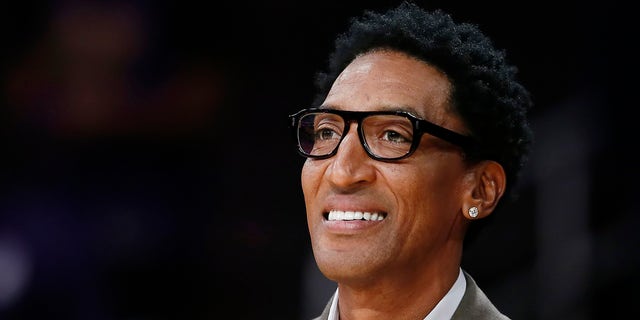 Scottie Pippen’s issue with Michael Jordan had become more apparent after “The Last Dance” documentary last year, which chronicled the final season the dynastic Chicago Bulls were together.

In his upcoming memoir called “Unguarded,” Pippen writes about why the documentary rubbed him the wrong way and how he thinks the contributions of him and other Bulls members of that era were dismissed.

Scottie Pippen smiling on court before the LA Clippers’ game against the Los Angeles Lakers on Dec. 25, 2019, at STAPLES Center in Los Angeles, California. (Chris Elise/NBAE via Getty Images)

“The final two episodes aired on May 17. Similar to the previous eight, they glorified Michael Jordan while not giving nearly enough praise to me and my proud teammates. Michael deserved a large portion of the blame,” Pippen writes, via GQ Magazine. “The producers had granted him editorial control of the final product. The doc couldn’t have been released otherwise. He was the leading man and the director. … Except Michael was determined to prove to the current generation of fans that he was larger-than-life during his day—and still larger than LeBron James, the player many consider his equal, if not superior.

“Even in the second episode, which focused for a while on my difficult upbringing and unlikely path to the NBA, the narrative returned to MJ and his determination to win. I was nothing more than a prop. His ‘best teammate of all time,’ he called me. He couldn’t have been more condescending if he tried.

HAWKS’ TRAE YOUNG ON REGULAR SEASON: ‘A LOT MORE BORING THAN THE PLAYOFFS’

Scottie Pippen of the Chicago Bulls drives past Tracy Murry of the Washington Bullets during the first half of game two in their NBA playoff game April 27, 1997, at the United Center in Chicago, Illinois.

“Each episode was the same: Michael on a pedestal, his teammates secondary, smaller, the message no different from when he referred to us back then as his ‘supporting cast.’ From one season to the next, we received little or no credit whenever we won but the bulk of the criticism when we lost. Michael could shoot 6 for 24 from the field, commit 5 turnovers, and he was still, in the minds of the adoring press and public, the Errorless Jordan… Now here I was, in my midfifties, seventeen years since my final game, watching us being demeaned once again. Living through it the first time was insulting enough.”

Pippen has appeared to take issue with a lot of what happened in the Bulls’ dynasty and how it was perceived afterward. In the book’s summary released in June, Pippen teased there’s “no ‘Michael Jordan’ as we know him” and he added that the “1990s Chicago Bulls teams would not exist as we know them” without Pippen himself.

Back in December, Pippen admitted to The Guardian that he reached out to Jordan directly to voice his displeasure about the documentary.

Michael Jordan (left) and Scottie Pippen of the Chicago Bulls talk during the final minutes of their game May 22, 1997, in the NBA Eastern Conference finals against the Miami Heat at the United Center in Chicago, Illinois. The Bulls won the game 75-68 to lead the series 2-0. (VINCENT LAFORET/AFP via Getty Images)

“I don’t think it was that accurate in terms of really defining what was accomplished in one of the greatest eras of basketball,” Pippen told the website. “But also by two of the greatest players – and one could even put that aside and say the greatest team of all time.”