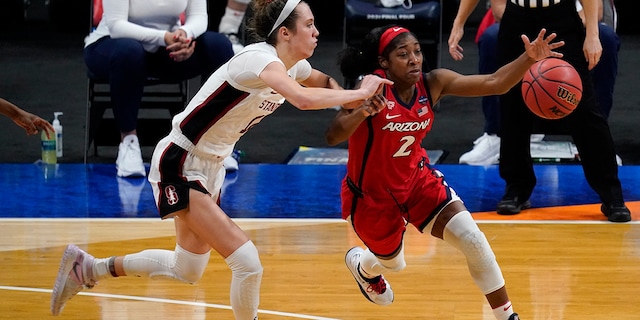 It was the first time Tara VanDerveer’s team has won a championship since 1992.

Haley Jones led the Cardinal with 17 points. She also had eight rebounds and a block in the game. She had a clutch and-one toward the end of the game. She was named the Most Outstanding Player of the tournament thanks in part to her national title performance.

Aari McDonald had one last chance to give the Wildcats a victory. She received the inbounds pass with about 6 seconds left in the game. She was then met with two Cardinal defenders and had to put up a fadeaway heave and it nearly went in.

McDonald led all scorers with 22 points on 5-of-21 from the floor. He added three rebounds two assists.

IT’S ON: GONZAGA VS. BAYLOR FOR THE NATIONAL CHAMPIONSHIP

It is Stanford’s third national title. All of which have been under VanDerveer. The 1992 title team included Molly Goodenbour, Rachel Hemmer and Val Whiting.

Stanford guard Haley Jones (30) drives to the basket over Arizona forward Cate Reese (25) during the first half of the championship game in the women’s Final Four NCAA college basketball tournament, Sunday, April 4, 2021, at the Alamodome in San Antonio. (AP Photo/Eric Gay)

Stanford dealt all season long with coronavirus rules and restrictions. The Cardinal only played six true home games all year and haven’t played a game in their home gym since Feb. 28.

The entire tournament was played in San Antonio, Texas, due to the coronavirus pandemic.