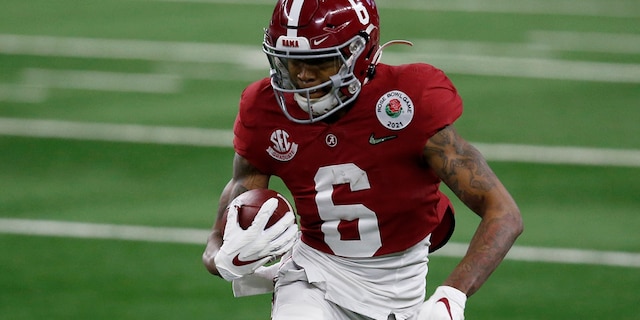 Alabama advanced to the national championship victory with a blowout win over Notre Dame, 31-14, on Friday night in the Rose Bowl and the College Football Playoff semifinal. The team will play the winner of the other semifinal game between Clemson and Ohio State.

Alabama will get a chance to win its sixth national championship under coach Nick Saban.

It was all offense for the Crimson Tide in this game. Despite bobbling an onside kick attempt and giving the ball back to Notre Dame with 56 seconds left, Devonta Smith had a pretty perfect game.

Smith had seven catches for 130 yards and three touchdowns and was basically the entire offense for Alabama. Mac Jones finished 26-for-31 with 303 passing yards and four touchdowns. His other touchdown pass went to Jahleel Billingsley in the first quarter.

Najee Harris controlled the ground game. He had an impressive hurdle over a Notre Dame defender to set up the Billinsgley score in the first quarter. Harris finished with 125 rushing yards on 15 carries.

Alabama was just too much for Ian Book and the Notre Dame offense.

Book, who was playing in his final collegiate game, finished 27-for-38 with a last-gasp rushing touchdown and an interception. Book couldn’t get the offense going early in the game and Alabama was able to score touchdowns on their first three drives of the game.

Kyren Williams finished with 64 yards on 16 carries and had a touchdown. Michael Mayer led Notre Dame receivers with seven catches for 62 yards.

Notre Dame finishes with their fourth consecutive 10-plus win season but fail to get it done in a major bowl game. The Fighting Irish have lost seven consecutive appearances in BCS games or New Year’s Six bowl games. The team had been outscored by more than 150 points in those appearances.

Alabama last won the title during the 2017 season when Tua Tagovailoa led the team on a dramatic comeback victory against Georgia.

The national championship will take place on Jan. 11 at Hard Rock Stadium in Miami Gardens, Fla.