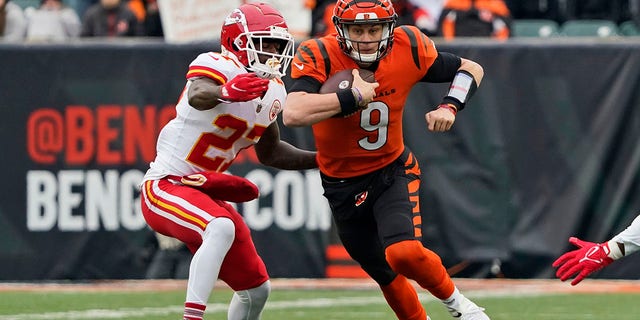 Jones, 68, spoke to Fox News Digital about Super Bowl LVI and what fans can expect to see when two former No. 1 Draft picks, Joe Burrow and Matthew Stafford, square off when Cincinnati Bengals and Los Angeles Rams meet at SoFi Stadium on Sunday night.

“I think he was probably more ready to come to the national football league than most young quarterbacks having played in the system that he played in at LSU,” Jones said of Burrow. “I think this postseason he’s been so accurate.”

Jones said the biggest hurdle for the second-year quarterback will be the Rams defense. He praised Burrow’s toughness but pointed to his league-high of 51 sacks as a major concern.

“His toughness has shown up and that has spurred his team to really believe in him and I think that’s coming through bright and clear with the whole football team,” he said.

“I think the Rams are going to try and take the quick throws away from him and let their front four go and I think, if they can take the quick throws away then the front four will get pressure and if (Burrow) has to hold the ball at all when they’re only rushing four, I think the D-line of the Rams is far superior to the offensive line of Cincinnati.”

While he’s expecting Burrow to put on quite the show, Jones feels it’s Stafford’s time to shine.

“He was never on a really good football team. Can he do it? Yeah he can do it and guess what, he’s proven that he can do it with the Rams. I think if he wins this game, nobody will ever question Matthew Stafford again.”

Jones, who was the head coach of Hawaii from 1999-2007, recalled being impressed by Stafford when Georgia played Hawaii in the Sugar Bowl in 2008.

“I know that the kid is the real deal from watching the film in college on him… I have always liked him, the only thing I’ll say that I noticed is that he threw more picks with the Rams that were not good throws, had chances that he had to complete them but he made bad throws.”

Matthew Stafford #9 of the Los Angeles Rams runs off the field after defeating the Tampa Bay Buccaneers 30-27 in the NFC Divisional Playoff game at Raymond James Stadium on January 23, 2022 in Tampa, Florida. (Kevin C. Cox/Getty Images)

He continued: “He’s played through a lot of adversity in those early years and I can see him playing his best game this Sunday because he’s been in big ones before at every level. Every coach in the league would like to have a Matthew Stafford. That’s a veteran that understands the game and makes the throws and that’s what you have and that’s not a knock on Joe because I’ll tell you when Joe’s a 10 or 12-year guy I think he may go down as one of the best that ever played in the National Football League. That’s what I think his potential is.”

The Bengals and Rams will face off at SoFi Stadium in Inglewood, California on Sunday at 6:30 p.m. ET.