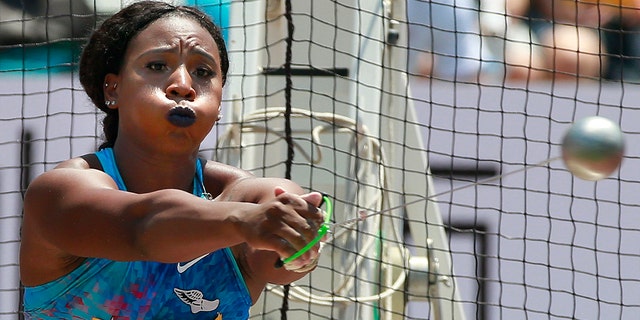 The camp put out a series of tweets about Berry’s decision to turn her back while “The Star-Spangled Banner” played.

“We applaud Ms. Berry on her bravery to stand up against systemic racism,” tweeted the camp, which was founded by the former San Francisco 49ers quarterback.

Kaepernick, who has been a proponent of abolishing law enforcement and prisons, founded the camp to “advance the liberation and well-being of Black and Brown communities through education, self-empowerment, mass-mobilization and the creation of new systems that elevate the next generation of change leaders.”

The former NFL star created a firestorm in 2016 when he knelt during the national anthem. His demonstrations has carried through sports around the world since then.

GWEN BERRY FIRES BACK AT ANTHEM DEMONSTRATION CRITICISM: ‘I NEVER SAID THAT I HATED THE COUNTRY’

Berry, on Saturday, finished in third place during the trials, earning a spot on the U.S. Olympic team. Her decision to turn her back on the flag and cover her face in the heat with a shirt that read “Activist Athlete” was what drew the scrutiny.

Berry took issue with the timing of the national anthem and said she was told it would be played before she stepped onto the podium.

“I feel like it was a set-up, and they did it on purpose,” Berry said. “I was pissed, to be honest.”

Gold and silver medalists DeAnna Price and Brooke Andersen faced the flag with their right hands over their hearts while Berry faced away and toward the stands.

FILE – In this Sunday, May 21, 2017, file photo, Gwen Berry, of the United States, competes in the women’s hammer throw at the Golden Grand Prix track and field event in Kawasaki, Japan. Gestures made at the Pan-Am Games in 2019 by Berry and fencer Race Imboden rekindled a contentious debate about the IOC’s Rule 50. In a major shift in policy, the U.S. Olympic and Paralympic Committee has since committed to not sanction athletes who use their platform for social demonstrations. (AP Photo/Shizuo Kambayashi, File) (AP)

“They said they were going to play it before we walked out, then they played it when we were out there … But I don’t really want to talk about the anthem because that’s not important,” she said. “The anthem doesn’t speak for me. It never has.”

A USA Track and Field spokesperson disputed Berry’s claim that it was a set-up.

Berry told the Black News Channel on Tuesday she never said “I hated the country.”

“All I said was I respect my people enough to not stand for or acknowledge something that disrespects them. I love my people. Point blank, period,” she added.