Army veteran to represent Team USA in Tokyo 2020 Paralympic Games: ‘It is an honor and a privilege’

Home Sports Army veteran to represent Team USA in Tokyo 2020 Paralympic Games: ‘It is an honor and a privilege’ 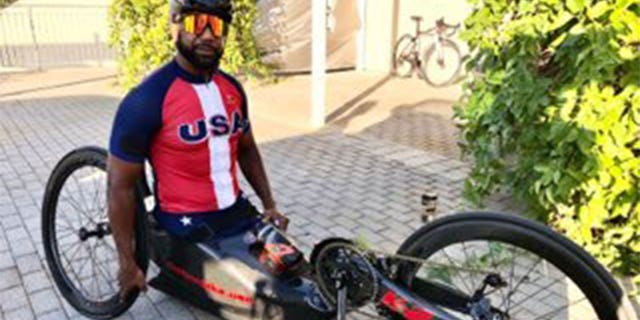 Retired Army Staff Sergeant Alfredo De los Santos proudly served his country following the terrorist attacks of 9/11 but after being wounded in combat, Freddie was determined to find another way to proudly serve the place he calls home.

De los Santos, 51, will be competing at the 2020 Paralympics in Tokyo later this month and will be representing Team USA in road cycling, something he told Fox News is one of the most important parts of his life now.

“I wanted to prove to myself and to others that I could continue to represent my country–just in a different way,” he told Fox News, via email. “Cycling is such an important part of my life and played a large role both physically and mentally in helping me with the transition from military service.”

“It is an honor and a privilege to be able to go to Tokyo and represent the United States in this way.”

Freddie was born in Santo Domingo, Dominican Republic but came to the U.S. in 1986 where he lived in Hopewell Junction, New York. While working as a graphic designer at NYU, Freddie’s life – like so many – changed after 9/11.

He joined the Army but while serving in the Helmand Providence of Afghanistan in October 2008, he was critically injured when his vehicle was struck by RPG fire. Freddie struggled with a severe traumatic brain injury (TBI) and post-traumatic stress disorder (PTSD) upon returning home but looking back he says “nothing has changed” for him.

“Being able to represent the country in combat was a blessing. If I had the opportunity to do everything all over again, I definitely would, but unfortunately, I was wounded in combat.”

Freddie says that being a part of Team USA has made his transition after the military “very organic.”

“In a lot of ways, the two feel very similar. I wake up every morning for training and am still surrounded by military members on Team USA.”

Freddie also spoke to the importance of mental health and his own struggles with it — an issue that was placed under the spotlight after Olympic gold medalist Simone Biles withdrew from several events in Tokyo last month after citing her own struggles.

“Mental health is a real issue,” he said. “A lot of times we tend to suck it up because we don’t want to show weakness. And it is easy for people to judge those who have opened up about different things they may be struggling with. But mental health is real. It’s affecting a lot of athletes, especially due to all the pressure associated with competing. It’s a tough life and a big responsibility.”

Freddie will be competing in the Paralympics for the second time but he expects that this will be much different than his experience in Rio. (Retired Army Staff Sergeant Alfredo De los Santos)

“When I came back from Afghanistan, I was suicidal and I was afraid to talk about it,” he continued. “I sucked it up and never told anyone. It ate me from the inside out. It wasn’t until I was able to get help that I was able to feel better and be productive again.”

He said the most important thing anyone in that situation can do is to “speak up.”

“The key is to ask for help and to be honest. Speak up. It is great to be an athlete and to be the best in the world, but at the same time, you are a human being. You have to take care of yourself.”

Freddie contributed much of his recovery to the Semper Fi & America’s Fund, an organization that provides immediate financial assistance and lifetime support to combat wounded, critically ill, and catastrophically injured service members and military families.

“I got to know Semper Fi & America’s Fund back in 2013. They helped me get some equipment so that I could continue with my recovery process through sport. Since then, they have always been supportive–not just as an athlete but also as an artist”

As a painter and photographer, Freddie says he “decompresses” through his artwork. In addition to providing him assistance in his sport and life, The Fund also provided him with the materials needed to continue his passion.

“Semper Fi & America’s Fund has been a real blessing in my life,” he told Fox News. “They took care of me … Everyone there goes out of their way to make sure that we are not left behind. I am so grateful to them for everything they have been doing for me since 2013.”

Freddie will be competing in the Paralympics for the second time but he expects that this will be much different than his experience in Rio.

“The pandemic has made it feel like a real combat zone. Protocol has changed and I have needed to isolate myself to stay safe and healthy prior to the Games … At the same time, it is still very exciting. We still have the opportunity to go to Tokyo and symbolize what human spirit is all about–competing and pushing yourself. We can show the world that even though in life there will be lots of obstacles, you can still be productive and overcome them.”

The circumstances might be different, but for Freddie, the goal remains the same.

“I have been training for five years to qualify for these Games. Although it will be a challenge, I am so honored to represent Team USA again. Hopefully this time, I will bring the gold medal home!”