Phoebe Bridgers Stands By SNL Guitar Smash: “It’s Hilarious to Me People Care So Much” 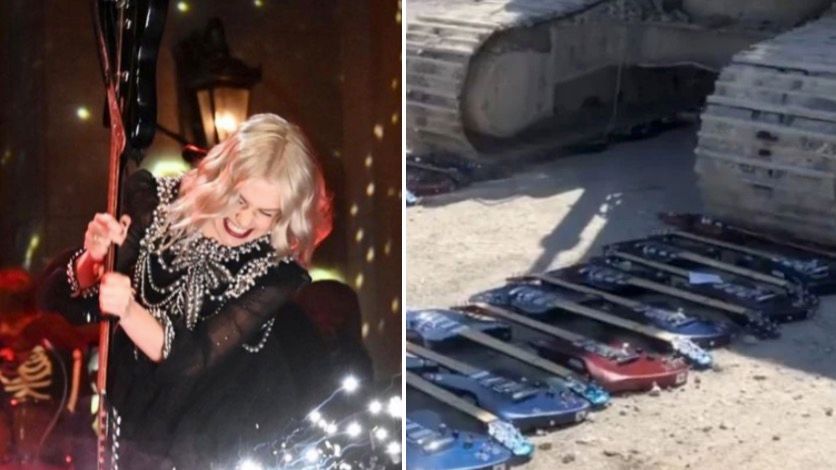 In February, Phoebe Bridgers gave a “controversial” performance on Saturday Night Live in which she smashed her guitar, drawing both praise and melodramatic criticism. The Grammy-nominated indie rocker was asked about the viral moment in a new Variety interview, during which she stood by the bucket list moment and described why she considered it kind of “punk rock.”

“I stand by it!” Bridgers said, in response to the backlash. “The fact that it made people so mad is kind of what’s punk rock about it. No thought whatsoever went into what it represented or meant: I’d never done it before, so might as well do it [on SNL], where it’s gonna be immortalized.

She continued by referencing a viral video in which hundreds of Gibson Firebird X guitars are crushed by heavy construction equipment. “It’s hilarious to me that people care so much, but, I mean, there’s a video of a steamroller crushing a bunch of Gibson [guitars] as a tax write-off because they weren’t selling all of their stock — let that piss you off!”

Following Bridgers’ SNL performance, she received criticism from none other than grumpy Rock and Roll Hall of Famer David Crosby, who obsessively tweeted about the incident for a couple of days after initially calling it “pathetic.” Meanwhile, Foo Fighters frontman Dave Grohl defended the guitar smash.

Bridgers later explained to CNN that the whole thing was staged, anyway. “I’ve always wanted to do it and when I mentioned it to the show, they built me this whole monitor that would look like it was exploded even if I wasn’t hitting it that hard,” she said.

Regardless of the extra attention, Bridgers has had quite the year. Thanks to Punisher, one of the best albums of 2020, she is nominated for four Grammy Awards, including Best New Artist and Best Alternative Music Album.