All Eyez on Me Captured 2Pac’s Last Moments of Peace 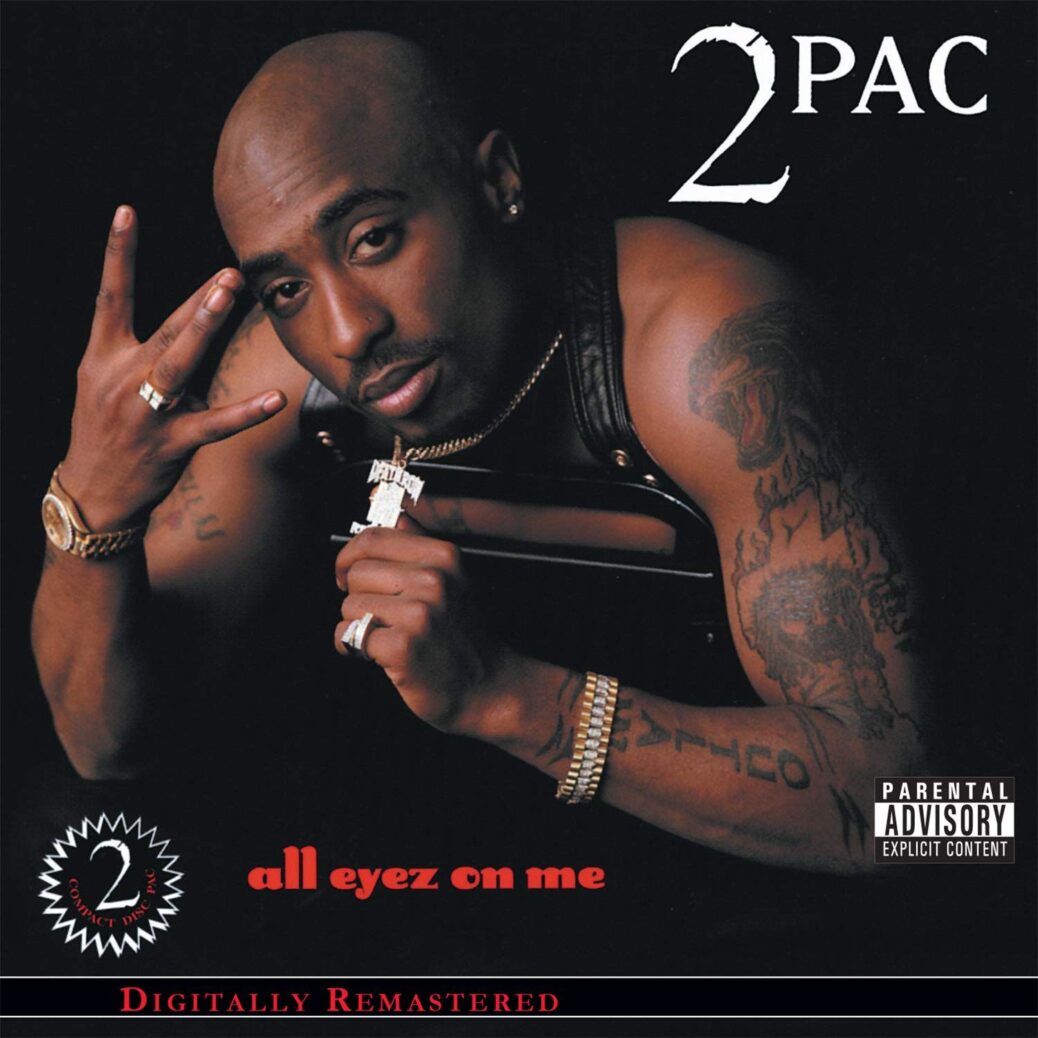 Editor’s Note: 2Pac’s All Eyez on Me originally dropped on February 13th, 1996. The double-album, the last record released while 2Pac was still alive, would go on to change the rap game forever. To celebrate the record’s 25th anniversary, Jayson Buford takes a look back at the album’s indelible legacy.

In October 1995, Death Row Records boss Suge Knight paid the $1.4 million bail that was on the head of rap superstar Tupac Amaru Shakur, whose name had increasingly been in the papers for both his talent and troubles. Shakur was serving a sentence of up to four years for sexual assault, a crime that he maintained he did not commit. Alongside that black mark on his reputation, the night before the judge announced the verdict to the world, back in November 1994, 2Pac was shot outside of Quad Studios in Manhattan. If you ask Pac on “Hit Em Up” — the scathing diss track directed at The Notorious B.I.G. and friends, among others — he would tell you that he took those five hot bullets and smiled. Nevertheless, he had been in Clinton Correctional Facility hearing the N-word being used by COs toward Black inmates including himself. He’d also start having issues sleeping. ‘’I wake up screaming. I’ve been having nightmares, thinking they’re still shooting me,’’ he would later tell Vibe magazine. Outside of prison, however, his star was on the rise, the rap scene recognizing him as one of the best, if not the best, rappers alive.

On March 1995, 2Pac dropped Me Against the World. It’s a sprawling album full of tender moments of pain, suicidal ideation, and love for his mother. There’s also the paranoia and aggression that 2Pac felt due to the shooting and the anxiety of being locked in a cage for almost a year. “If I Die 2Nite” opens with the age-old parable: “A coward dies a thousand deaths, a soldier dies but one.” Using alliteration, he surveys the visual scene: “Picturing pitiful punk niggas copping pleas/ Puffing weed as I position myself to clock G’s.” Me Against the World is a classic — a portrait of a man who’s filled with regrets, loneliness, and pain. Listening to it feels like you are hearing it from Clinton Correctional Facility.

That record found him on a new level as a rapper, too. Gone were the songs that were strictly about socioeconomic issues plaguing the Black community like “Brenda’s Got a Baby” or “Keep Ya Head Up”. Instead came songs that were more directly personal and written so that everyone could sing along to them. “Dear Mama” is clichéd, but it’s clichéd for a reason. It’s a song with such incredible gravitas. It is personal towards Pac’s mother, but the central theme is what sticks with you. It isn’t just about your mom; it is the longing for the person who would never harm you. It is the sadness of a man behind bars, who is missing the one person in the world that he always feels safe with. However, despite the strides 2Pac made on Me Against the World, it still pales in comparison to his next album, All Eyez on Me. Consider the former a warm-up for the record that would become a main event.

After Suge Knight bailed him out, 2Pac was operating at a pace only rivaled by Adam Sandler in Uncut Gems. “He worked like a f*****g racehorse,” said former labelmate Snoop Dogg, who is featured on the album. If collaborators were not ready, Shakur would move on to the next track. Snoop has suggested that this is because Pac felt that his days as a free man on earth were numbered. Nate Dogg has said that he thinks it is because Pac wanted to satisfy his contract with Death Row (he was supposed to give them three albums) and then move on with his career. Whatever the reason, 2Pac was recording music at a pace that only rappers like Future, Lil Wayne, or 03 Greedo have routinely matched since then. Urban legend has it that after making a song, Pac wouldn’t even listen to it. He’d just immediately start recording the next song.

Pac and Snoop would connect on “2 of Amerikaz Most Wanted’’, a duet that is pushing back at the defamation that white America has framed on Snoop and Pac. It’s funny to hear that now, with superstar rappers becoming basically pop stars, but back then, gangsta rappers were associated with every negative perception of Black America and the hood. They were considered the boogeyman — public enemy number one, just like John Dillinger before them. A single song begins that onslaught that you hear throughout the album; it opens with 2Pac whispering: “Money over bitches, not bitches over money, stay on your grind.” If All Eyez on Me is a Charles Dickens novel that grapples with contradictions of freedom, then ‘’Ambitionz Az a Ridah’’ is the first chapter of A Tale of Two Cities. 2Pac raps about having the freedom to ride on his enemies but constantly feeling angsty and paranoid means he was never truly free. He was never truly able to go back to a better place and be at peace.

All Eyez on Me has it all. It has songs for women and about sex (ominous considering the allegations against Shakur) like “How Do U Want It”, songs that are tender like “Only God Can Judge Me”, and storytelling songs like “Shorty Wanna Be a Thug”, but the bottom line is that this is an album with elite rapping on it. The millennial take (I think this was started by white hip-hop fans) that 2Pac wasn’t a good rapper is as big of a lie as Pinocchio ever told. He was a beast of an emcee. His skills went well beyond being able to deliver personal bars that listeners could easily relate to; he could display complex emotions from within and get them across in a single song or verse. “Got My Mind Made Up” shows him out-rapping East Coast stars Method Man and Redman with ease as if he was a member of Wu-Tang. He compares his music to a thugged-out version of “Rhythm Nation” but apologizes to his Poetic Justice co-star Janet Jackson while he does it. That was Tupac: Causing trouble one moment and feeling regretful the next.

“Heartz of Men” is one of his magnum opuses: “I died and came back/ I hustle with these lyrics as if it’s a game of crack/ Thuggin’ is in my spirit/ I’m lost and not knowin’/ Scarred up but still flowin’/ Energized and still goin’.” People are complicated and there was no rapper who empathized with that complexity of trauma and emotions like 2Pac could. “Only God Can Judge Me” is a confession: For the first nine songs on All Eyez on Me, you mostly get a man who is boastful. He’s laughing at the enemy while smoking a cigar like he borrowed the personality of Suge himself. As men are bound to do, though, he stops for a second to spear your soul: ‘’Will I succeed/ Paranoid from the weed/ And hocus pocus try to focus but I can’t see.”

All Eyez on Me is lengthy. The first-ever hip-hop double-album clocks in at just over two hours, but it’s uncompromising and a full view of a man’s trauma, tribulations, and triumphs. There are also moments of pure joy and pleasure like “Picture Me Rollin’”. He calls the DA and CO’s “bitches and ho’s.” He asks if he is clear to them. He’s talking to the people who locked him up, but I actually think he is also talking to us. In September of ’96, Tupac was assassinated in Las Vegas. “Picture Me Rollin’” is the one of the last times we hear him truly free. He’s forceful but controlled, charged up but relaxed. He knows that he beat them. Paranoia followed Pac until it finally caught up to him on that night in Vegas. But I’d rather think of him as we hear him on “Picture Me Rollin’”. I imagine him talking in the studio with a blunt in his hands, laughing with that million-dollar smile. Picture him. Rollin’.

Pick up a copy of All Eyez on Me here…

All Eyez on Me Artwork