They didn’t want to get Covid-19 shots. This is what convinced them.

Home LIFESTYLE HEALTH & FITNESS They didn’t want to get Covid-19 shots. This is what convinced them. 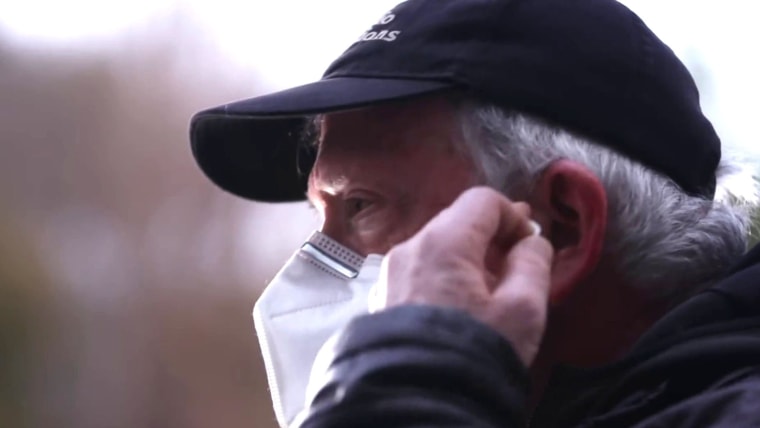 Linda Estes could not wait to get vaccinated against Covid-19. Her granddaughter, Liz Serrano, was more hesitant.

Serrano, 19, lives with Estes in Yakima, Washington, and doesn’t like needles. She worried the vaccine could endanger her health, despite overwhelming data indicating it is safe.

To ease her granddaughter’s anxiety, Estes, 64, brought Serrano with her when she got vaccinated. The shot went fine, other than a sore arm.

Seeing how smoothly the shot went for her grandmother, and hearing of others who had similar experiences in the weeks that followed, Serrano began to reconsider her position.

A discussion with her doctor reassured her that the vaccine was safe. And a needle prick, she realized, was manageable if it meant saving lives. After several months of thinking about it, Serrano decided, “I want to do this — just do my part.”

In interviews with NBC News, individuals who were initially reluctant to get their vaccinations said nudging from family members, fears about emerging variants and having the ability to shrug off rumors about the shot were among the reasons they finally decided to roll up their sleeves, months after the shot became available.

Erin, 47, a cook and part-time translator in Sheffield, Alabama, who asked to be identified by her first name only for fear of job reprisal, decided this week to get vaccinated.

She had been too nervous that side effects would cause her to miss work at her restaurant, which she was certain would result in her boss giving her fewer shifts in the future. That would put a financial strain on the mother of three, who is on food stamps and gets no paid sick leave.

Once she read about the highly transmissible new delta variant — which Dr. Anthony Fauci, the nation’s top infectious diseases doctor, has declared the “greatest threat” to eliminating the coronavirus — she decided to get vaccinated. She urged others in her financial position to do the same.

“Suck it up,” she said. “You’re going to lose your money for the short term, but you’ll have your life and your family will have you.”

Vaccines have been found to be effective against preventing severe disease caused by the delta variant and other variants, yet the pace of Covid-19 vaccinations is slowing across the country. The vaccines, once in short supply, are now available in surplus; the White House has conceded it will not meet its goal of 70 percent of adults getting at least one shot by July 4.

But convincing vaccine holdouts is tough. A Gallup poll released June 7 found that of those not planning to get vaccinated, 78 percent said they were unlikely to reconsider, including 51 percent who said they were “not likely at all” to change their minds.

Experts say convincing those on the fence comes down to helping them understand what is at stake.

“The risk-benefit balance that most people look at is between getting vaccine and not getting vaccine, and I think that’s not quite the right way to frame this,” said Dr. Nipunie Rajapakse, a pediatric infectious diseases physician at Mayo Clinic. “We should be thinking of this as getting vaccine versus getting Covid-19.”

What works — and what doesn’t

What — or who — can convince someone to get vaccinated varies as much as the reasons a person might avoid the Covid-19 shot in the first place.

Objections range from suspicions over how quickly the vaccine was developed to questions over whether it will cause long-term health problems.

There are also misconceptions about the cost of the vaccine (it’s free), whether doctors profit from it (they don’t) and a viral fringe theory that claims the shot will implant a microchip in arms that enables the government to track people (it definitely doesn’t).

“It has brought out a lot of different communities that may not typically be anti-vaxxers,” said Dr. Emily Spivak, associate professor of medicine in the division of infectious diseases at University of Utah Health.

While the vaccine was made at record speed, the technology for it had been in the works for years, Spivak said.

And though it is true that long-term safety data does not exist, the majority of reactions to any vaccine happen within minutes in the case of an allergy or within weeks to a couple months if there are other issues.

The best way to open a conversation about vaccine hesitancy is by respectfully listening to someone’s reasons for objecting, Rajapakse said.

“If you’re not addressing their reason, that’s not helpful,” she said. “There’s often emotional responses related to vaccination, and I think listening in an open way is important, and not jumping to conclusions or shaming them is important.”

Research has found hesitancy to take the Covid-19 vaccination is more prevalent among Latino and Black Americans, with history of racial discrimination and medical mistrust as contributing factors.

Federal health officials have also highlighted young adults, who may feel more immune from catching severe cases of the coronavirus, as barriers toward reaching their vaccination goal.

Public health officials have gotten creative in their efforts to increase vaccination rates, with states offering incentives from sweepstakes worth millions of dollars to the chance to win hunting rifles for those who have gotten their shots.

But whether the programs actually increase vaccination rates is unclear: In Ohio, the first state to offer a raffle for vaccinated individuals, the boost lasted just a couple weeks. In New Mexico, the seven-day average of new vaccination registrations during the first week was just 85 more a day after prize money was announced versus before, according to The Associated Press.

Work mandates may compel some people, but not all: In Texas, more than 150 employees at Houston Methodist hospital system who refused to get a Covid-19 vaccination recently resigned or were fired.

The best bet, experts say, is connecting on personal issues that are meaningful. That will vary by individual.

In some families, parents of a newborn forbidding relatives from seeing the baby unless they get vaccinated may be the final push someone needs. In other circles, realizing that certain pre-pandemic activities, such as concerts, travel or sporting events, may continue to be restricted could be what gets someone to get vaccinated.

Those who want to sway a vaccine-reluctant family member or friend should go in with the hope to educate them, not necessarily to convince them, said Chivonna Childs, a counseling psychologist at the Cleveland Clinic. That might mean asking them where they are getting their information about the vaccines.

“Encourage people to get information from reliable sources and just have purposeful, intentional conversations. No pressure, no arguments,” she said.

From a ‘possible’ conspiracy theorist to fully vaccinated

There is hope that people’s minds can be changed.

Matthew Mallory, 34, an entrepreneur and tractor-trailer driver from Lorton, Virginia, has not trusted doctors since a bad experience in the hospital after a 2005 motorcycle accident. That was one reason he did not want to get his Covid-19 shot. The other was because he felt there was a slim possibility that the rumors he was reading on social media about the government being able to track people after they got their shots could be true.

What changed his mind was meeting Kizzmekia Corbett, the immunologist who was instrumental in developing the Moderna Covid-19 shot, at an MSNBC town hall about vaccinations in May. She touted the safety and efficacy data of the vaccines to him. After ruminating about it for several days, he decided it all must have happened for a reason.

“God put me in this position to get advice from the town hall, have the creator of the vaccine talk to me. God put all this stuff in my path,” he said.

As for the conspiracy theories, he no longer gives them a second thought.

“I can’t change what I’ve already done, so there’s no point in worrying about it now,” he said.

Amanda Hunt, 30, an aspiring young adult novelist in Alaska, also did not want to get vaccinated. Hunt has had a phobia of medical facilities ever since a dog bit her when she was a young child, resulting in extensive surgery.

Shots in the past have not gone well. When Hunt tried to get a flu shot several years ago, she started to hyperventilate and ended up declining the shot. She was worried the same thing would happen with the Covid-19 shot.

Last month, with her husband by her side, she worked up the courage to get vaccinated after her mom and brother told her they had gotten their shots. And while she did have a panic attack after receiving her vaccination, she calmed herself with deep breaths and by reminding herself why she had done this.

“I was able to focus on good things. This is only for the betterment of your health, and they’re not trying to kill you with this shot,” she said.

She encouraged anyone with anxiety to do whatever makes them feel more relaxed — “even if it’s bringing a stuffed animal or something.”

In Yakima, Washington, Estes, the woman who convinced her granddaughter to get vaccinated, recently also managed to persuade her granddaughter’s boyfriend to get the shot. He had worried he might have side effects, and he did, resulting in him being unable to get out of bed for a couple of days.

“I felt so bad for him,” Estes said. But, she added, there were no hard feelings.