Pregnant women who get Covid vaccine may pass immunity to newborn, study finds 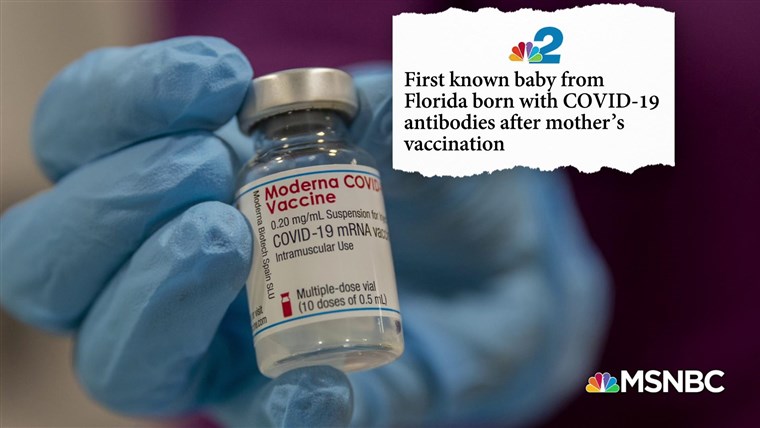 New and expectant moms are getting reassuring new evidence about the efficacy of the Covid-19 vaccine.

Pregnant and breastfeeding women who get the shot show a robust immune response similar to that of women who have not conceived or given birth, researchers reported Thursday.

The study, published in the American Journal of Obstetrics and Gynecology, also found the moms’ antibodies were present in their umbilical cord blood and breast milk, suggesting they pass on immunity to their babies.

The findings are key for OB-GYNs and other medical professionals who have faced “a complete lack of data” because pregnant and breastfeeding women were left out of the initial vaccine trials, said Dr. Andrea Edlow, a maternal-fetal medicine specialist at Massachusetts General Hospital in Boston and a study co-author.

“It does seem like great news,” Edlow told NBC’s “TODAY” show. “This study is one piece of the puzzle that’s essential to try to give pregnant and lactating women evidence-based counseling around the vaccine.”

The study, conducted at two medical centers, included 131 women of reproductive age: 84 were pregnant, 31 were breastfeeding and 16 were used as the control group. All received both doses of either the Pfizer-BioNTech or Moderna Covid-19 vaccine.

When researchers tested their blood afterward, vaccine-induced antibodies were the same in all three groups. Antibodies were also found in umbilical cord blood and breast milk, suggesting “the baby does have protection; we just don’t know how long it will last,” Edlow said.

The antibodies generated in response to the vaccine were at much higher levels than those seen in women who had already had Covid-19, she noted.

Dr. Iffath Hoskins, an OB-GYN at NYU Langone Medical Center in New York and president-elect of the American College of Obstetricians and Gynecologists, called the findings “very much reassuring.”

A pregnant woman’s immune system is suppressed so her body doesn’t reject the fetus, she noted, so there was debate about how effective a vaccine would be.

“What this study is showing us is that the mother does mount a robust response,” said Hoskins, who was not involved in the new research. “Her body does wake up … making antibodies to the prod that just happened, which is the coronavirus vaccine.”

Is the Covid-19 vaccine safe?

The study wasn’t designed to answer the question about the overall safety of the vaccine, Edlow noted.

There’s currently limited data available about the safety of Covid-19 vaccines for pregnant women, though experts believe they’re unlikely to pose a specific risk for expectant moms, the Centers for Disease Control and Prevention noted.

Studies in animals found no safety concerns. The mRNA technology used by Pfizer and Moderna is new. But the vaccine platform used by the Johnson & Johnson shot has been given to pregnant women before, including in a large-scale Ebola vaccination trial, with no adverse effects.

Covid-19 vaccines should be offered to pregnant and breastfeeding women, who can make their own decision about whether to get the shot, the American College of Obstetricians and Gynecologists advises. Covid-19 is more severe in pregnant women, with an increased risk of hospitalization and death.

Hoskins sees both pregnant women who don’t want the vaccine and those who can’t wait to get it. She tells patients that getting vaccinated is the safest option, but she notes doctors don’t know long-term effects yet.

“There’s a whole big bucket of ‘We don’t know,’” she said. “In my personal opinion, there’s a bigger bucket of ‘We do know that Covid sucks and it’s really bad for everybody, including a pregnant woman.’”

“We can certainly tell them with complete surety that getting Covid in pregnancy is potentially very dangerous,” Edlow echoed.

Both experts recommended any Covid-19 vaccine — whether it’s the Pfizer, Moderna or Johnson & Johnson version — to pregnant women who are seeking vaccinations when they become eligible.

The new study only looked at third trimester vaccination, with more research underway about the best timing for getting the shot. For now, it makes sense to get the vaccine as soon it becomes available for you, Edlow said.

A. Pawlowski is a regular NBC News contributor focusing on health, travel and business news and features. Previously, she was a writer, editor and producer at CNN.