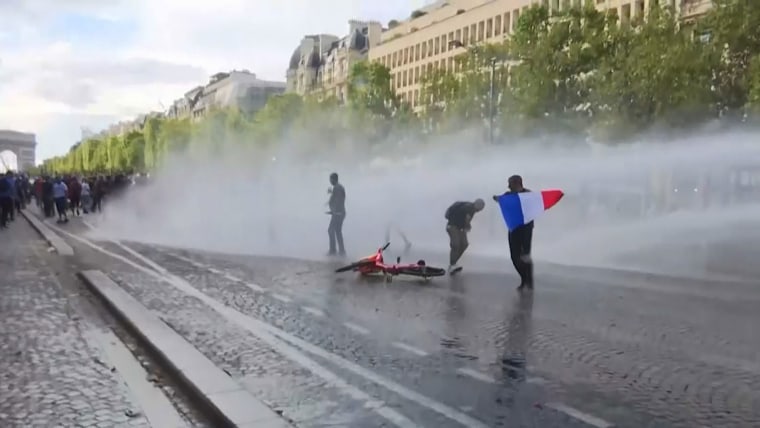 French President Emmanuel Macron has spent the past few weeks fighting back against critics of his tough coronavirus measures.

Now one of them is facing legal trouble over a billboard depicting him as Nazi leader Adolf Hitler.

The poster protest was part of a broader backlash against Macron as he seeks to make rules stringent aimed at curbing infections.

His policies have helped drive a boom in sign-ups for vaccination appointments, but also stoked fierce opposition among a minority who see them as an attack on cherished national freedoms.

The poster, which appeared in the southern French port city of Toulon, depicted Macron in uniform as the Nazi leader complete with the trademark mustache. The swastika armband was altered to read LREM — La République En Marche — Macron’s governing political party.

The creator of the billboard, Michel-ange Flori, said on social media Wednesday that he would attend a hearing at the Toulon police station Thursday.

“I just learned that the complaint comes from the President of the Republic himself,” he wrote. “So in Macronism, one can make fun of the ass of the prophet, it is regarded as satire, but to caricature the president as a dictator is considered blasphemy.”

The public broadcaster France Bleu reported that an investigation was opened by the Toulon prosecutor’s office last Tuesday for “public insult” after posters depicting Macron as Hitler appeared on two advertising panels.

NBC News has not confirmed whether Macron has sued Flori. Neither Macron’s office nor the Toulon police responded to requests for comment.

The American Jewish Committee said Thursday it was “sickened” by the billboards.

“The Nazis killed six million Jews. The vaccine is saving millions of lives. Comparisons to the Holocaust are outrageous and desecrate the memory of victims and survivors,” it said on Twitter.

The offense of “insulting the president of the Republic” was repealed in 2013 after a ruling by the European Court of Human Rights, but the head of state is protected from insult and public defamation like any other citizen.

Macron imposed some of Europe’s toughest Covid-19 mandates earlier this month, hoping to speed up vaccinations and avoid a new national lockdown following a surge in cases of the highly infectious delta variant.

He said Monday that 40 million people in France — about 60 percent of the population — had received at least the first dose of a Covid-19 vaccination, with 4 million of the shots administered in the past two weeks alone.

The French Parliament passed a law Monday requiring all health care workers to get vaccinated by Sept. 15, and introducing a special mandatory pass for anyone who wants to travel domestically or go to a restaurant, mall or hospital.

To get the pass, people must show proof that they’re fully vaccinated or have recently recovered from the virus or have taken a fresh negative test.

Macron first introduced the plan in a televised address to the nation July 12.

“We were facing a fourth and very problematic new wave. People were not as concerned as they were earlier about the virus and the vaccination rate was not great,” said Jean-David Zeitoun, chief medical officer and founding partner of the Paris-based medical research facility Inato.

“The significant push from Macron triggered several reactions in France. On the one hand, there was huge increase in vaccine take up, which was great,” he said.

“On the other hand, some people have reacted with anger … but this seems to be a minority group.”

Some 160,000 people, including far-right activists and members of France’s yellow vest movement, protested Saturday across the country.

Anti-riot police in Paris fired tear gas during demonstrations in the nation’s capital, while many marchers shouted “liberty!” and said the government shouldn’t tell them what to do.

Macron has urged national unity and said earlier this week that protesters are “free to express themselves in a calm and respectful manner,” but that doing so won’t make the coronavirus go away.

He has also lashed out at those fueling anti-vaccine sentiment and protests. On a visit to a hospital in French Polynesia earlier this week, he asked: “What is your freedom worth if you say to me, ‘I don’t want to be vaccinated,’ but tomorrow you infect your father, your mother or myself?’”