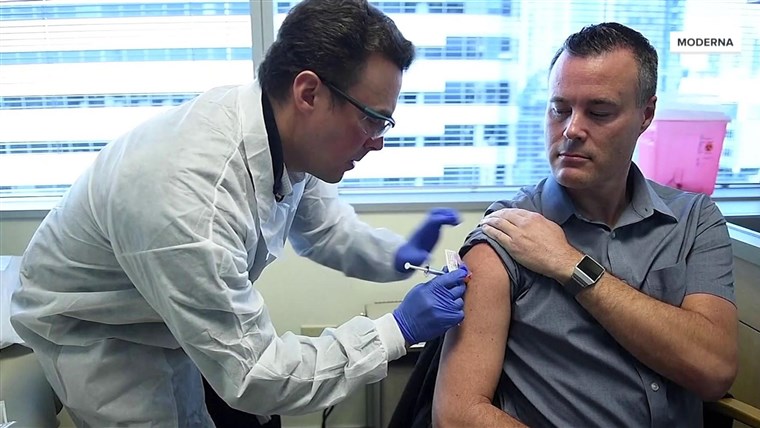 LONDON — A leading coronavirus vaccine candidate developed by Pfizer and BioNTech will be submitted for regulatory approval “within days,” the companies announced Wednesday, after their final analysis suggested the drug was even more effective than previously thought.

The U.S. pharma giant and its German partner said their Phase 3 trial was now complete, and that it found the vaccine was 95 percent effective at preventing symptomatic Covid-19 — up from the 90 percent announced last week.

There have been no serious side effects among the 41,135 adults who received two doses, the companies said in a joint statement. The most common reactions were that 3.7 percent of participants experiencing fatigue and 2 percent had a headache, it said.

Experts have urged caution, particularly before more data is publicly released. And distributing any vaccine to the United States and wider world will also be a monumental logistical challenge.

But nevertheless the news has been treated as a glimmer of hope in an otherwise bleak year, as global deaths have risen above 1.3 million, almost 250,000 of them in the United States. If approval was given this year, that would beat expectations in what is usually a glacially slow process.

“The study results mark an important step in this historic eight-month journey to bring forward a vaccine capable of helping to end this devastating pandemic,” Dr. Albert Bourla, Pfizer chairman and CEO, said in the statement. “With hundreds of thousands of people around the globe infected every day, we urgently need to get a safe and effective vaccine to the world.”

Pfizer and BioNTech said they will now submit a request “within days” for emergency use authorization with the U.S. Food and Drug Administration, while sharing their data with regulators in Europe and elsewhere.

The news comes days after Moderna, a biotech company based in Massachusetts, said early analysis from its own Phase 3 trial suggested its vaccine candidate was 94.5 percent effective.

Doubly encouraging, experts say, is that the Pfizer-BioNTech and Moderna candidates both use the same cutting-edge technology: messenger code called “RNA” that’s injected into the body and tricks it into producing an immune response.

The figure of 95 percent comes from Pfizer and BioNTech analyzing 170 confirmed cases among the 40,000-plus people involved in the trial. Just eight people who were given the vaccine got sick, compared with 162 who were given a placebo.

That is an improvement on data released last week, which looked at 94 confirmed cases and showed 90 percent efficacy.

This effectiveness was consistent for all age and race-related demographics, it said. Any side effects resolved themselves “shortly after vaccination” and among older adults these tended to be “fewer and milder,” the statement said.

Pfizer says it plans to manufacture 50 million doses this year and 1.3 billion in 2021, using facilities in Missouri, Massachusetts, Michigan and Belgium. Its vaccine must be kept at minus 94 degrees Fahrenheit.

Pfizer has developed a super-cool storage unit packed with dry ice, which it says will help transport the vaccine around the world, including to remote places. But experts warn that in practice keeping such a vaccine at such low temperatures will be an unprecedented supply-chain challenge.