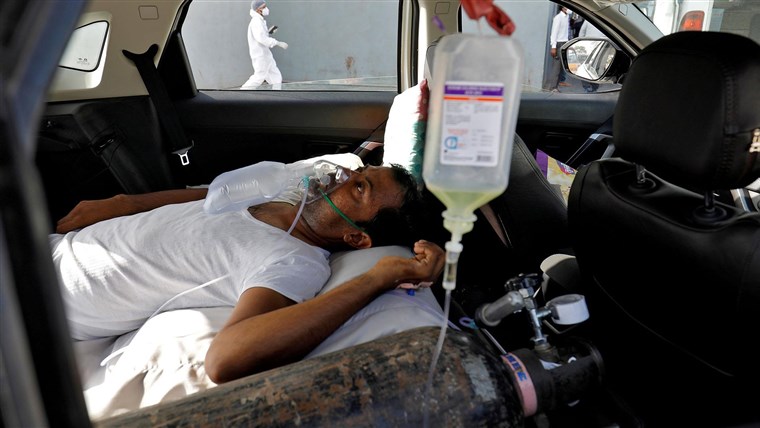 Ujwala Dupare gripped her younger brother’s hand as he lay struggling to catch his breath in the back of the car.

“Don’t be scared, I’m right here,” she recalls telling Praveen Durge as the family frantically searched for an empty hospital bed in the western Indian state of Maharashtra. “I’m right next to you.”

“He began to get scared, and softly told us that he thought he was going to die,” Dupare told NBC News in a telephone interview. “I kept reassuring him, holding his hand.”

As they approached the last hospital on their list, Durge’s wife, Khushabu, saw that his eyes had closed. She screamed and called his name. “Wake up, please, get up,” she cried, according to Dupare.

The married father of one died in the backseat of the car from complications related to Covid-19. He was 40.

Praveen Durge is one of more than 187,000 people, according to official figures, to have died from the virus that is ravaging India.

The country on Friday reported more than 332,000 new infections, a world record for the second straight day that raised the total number of cases past 16 million since the pandemic began.

With more than 4 million cases recorded, Maharashtra is the worst affected state in the country of nearly 1.4 billion people.

Images of mass cremations are circulating online, as India grapples with the deluge of deaths and collapsing health care systems.

The surge has brought pain, fear and anxiety to millions of families across the country. As they desperately try to navigate the crisis, thousands of Indians are turning to social media for help.

Messages from people trying to find a vacant bed, scarce supply of oxygen or the antiviral medication remdesivir are flooding Twitter and Facebook.

They have even been joined by hospitals themselves, with a major chain in the capital New Delhi on Friday begging for more supplies on Twitter to save growing crowds of patients who are struggling to breathe.

A fire at a hospital in a suburb of Mumbai also killed 13 people on Friday, the latest accident to hit a facility crowded with virus sufferers. On Wednesday, 22 patients died at a public hospital in Maharashtra when their oxygen supply ran out due to a leaking tank.

Durge, a school teacher, first developed a fever and a cough last week.

Suspecting he might have caught Covid-19, he went to a private hospital on Saturday, hoping to be admitted and receive treatment. But the hospital had no space or Covid-19 testing kits and sent Durge home with only medication to soothe his sore throat.

The next day, his health deteriorated rapidly, his sister Ujwala Dupare said. At 2 a.m. Sunday, he woke up unable to breathe properly.

“My husband, his wife, and I immediately put him in the car and we drove from hospital to hospital in search of a vacant hospital bed,” she said.

For more than three hours, in the early hours of Sunday, they went to about 12 hospitals across the city of Chandrapur, she said.

“All of them turned us away,” Dupare said.

“Not one single doctor even came out to take a look at my brother, even as we begged them to. We were so distressed, we even begged the doctor to let him sleep on the hospital floor. Everyone said no.”

A post-mortem confirmed that Durge was Covid-19 positive.

His family, unable to perform the traditional Hindu funeral rites due to his status, were made to conduct the funeral at a hospital-run crematorium for positive patients.

Durge leaves behind a five-year-old son and his wife, Khushabu.

“His son keeps asking, ‘Where is daddy?'” said Dupare. “What can we tell him? He’s a small child and doesn’t understand what’s going on. It’s too traumatic.”

Khushbu, meanwhile, has also tested positive and is currently in a government quarantine facility alone.

For Dupare, however, this is about more than a single family’s tragedy.

“Forty eight people died from Covid-19 at one of the hospitals we visited that night,” said Durge’s sister, Ujwala Dupare.

“I want people to know what is happening in India. This is real.”