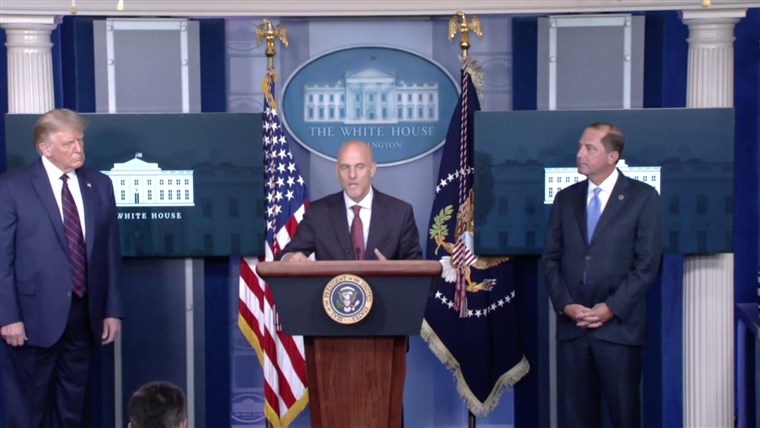 On Sunday, President Donald Trump announced that the Food and Drug Administration had granted an emergency use authorization for convalescent plasma to treat COVID-19. In describing the reasoning behind the authorization, Hahn misrepresented data related to the treatment’s effect on mortality rates.

He later apologized, but public health experts say the damage had already been done.

These experts say an effective response to the pandemic relies on trust and confidence in health officials.

Trust “is the absolute foundation,” said Dr. Howard Koh, a professor at the Harvard T.H. Chan School of Public Health who was an assistant secretary for health in the Obama administration.

“When trust is not upheld,” Koh said, “then there is open confusion like we’re seeing now.”

Doctors rely on scientific evidence to guide their recommendations for patients, particularly as they relate to previously unknown pathogens, such as SARS-CoV-2, the virus that causes COVID-19.

“It’s a situation of extreme uncertainty,” said Dr. Richard Besser, president of the Robert Wood Johnson Foundation and former acting director of the Centers for Disease Control and Prevention. “You have a new infectious agent, and you’re making your best recommendations in terms of what people should do.”

A successful pandemic response relies on the “public trusting what you’re saying,” Besser said in a recent interview with NBC News.

Convalescent plasma has been shown to be safe. Though randomized clinical trials are ongoing, they have not yet proven that the therapy actually works.

But on Sunday, Hahn touted data that he said showed a “35 percent improvement in survival” among COVID-19 patients who received convalescent plasma.

Hahn told the American people it was a “substantial clinical benefit,” explaining that plasma could save the lives of 35 out of 100 patients — a claim that could not be verified.

It appears Hahn was pulling the statistic from a part of preliminary study of convalescent plasma from the Mayo Clinic, which compared a small subset of patients who either received a high or low concentration of COVID-19 antibodies in the plasma.

Backlash was swift. Dr. Eric Topol, director of the Scripps Research Translational Institute in California, tweeted that the claim was “absolutely wrong,” adding, “there is no evidence at this juncture to support any survival benefit.”

I have been criticized for remarks I made Sunday night about the benefits of convalescent plasma. The criticism is entirely justified. What I should have said better is that the data show a relative risk reduction not an absolute risk reduction.

Hahn also tweeted about the incident, acknowledging the criticism he received over his remarks was “entirely justified.”

He added: “The authorization of emergency use of convalescent plasma is not a final approval. FDA will continue to monitor its use and will revoke authorization if needed.”

“That trust is maintained by ongoing conversation — sharing what you know, what you don’t know, and what you’re doing to try and learn more,” he said.

It also includes being transparent about the reasoning behind other public health suggestions, such as wearing masks, maintaining a physical distance of at least 6 feet from other people and avoiding large gatherings.

A lack of confidence from the American people comes at a critical point, as the FDA could soon be asked to evaluate the effectiveness and safety of a COVID-19 vaccine. Erosion of public trust could jeopardize the public’s faith in the agency’s decision-making, and therefore, whether they feel confident in the vaccine.

“We have to demand the highest level of rigorous science to guide our decisions.”