A mouthful of nickels? Some say they taste metal after a Covid-19 vaccination

Home LIFESTYLE HEALTH & FITNESS A mouthful of nickels? Some say they taste metal after a Covid-19 vaccination 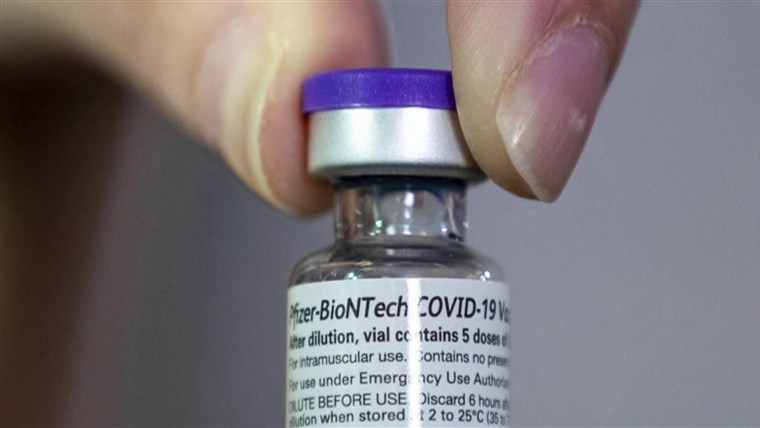 In addition to arm soreness and a little malaise, some people are reporting an unusual side effect following their Covid-19 vaccinations: an intense metallic taste that can last for days.

The experience is “like having nickels in your mouth,” said John Howard, 45, of Columbia, South Carolina. The sensation came on within minutes of receiving his first dose of the Pfizer Covid-19 vaccination this past week. He tried to get rid of it with coffee, then mouthwash. Twenty-four hours later, the metal taste remained.

“It’s certainly not debilitating or anything like that,” Howard, a contributor for NBC Sports, said. “But I do hope it goes away. I would like my coffee to taste normal.”

He is not alone. Dave Bischel, 52, of Sacramento, California, said he tasted something that reminded him of nickels after both of his Pfizer shots. The metallic taste went away after a few days.

And Paul Wartenberg, 50, of Mulberry, Florida, said he tasted metal for several hours after his Moderna injection. It disappeared after eating dinner.

While rare, developing a metallic taste after a vaccination is not unheard of; in fact, it’s a side effect that’s been documented with other vaccines, antibiotics and pain medicines.

“We’ve seen a few individuals with unusual taste after vaccines, commonly a metallic taste that lasts for several days,” said Dr. Buddy Creech, an infectious disease expert and the director of the Vanderbilt Vaccine Research Program at the Vanderbilt University Medical Center in Nashville, Tennessee.

A 1999 case report detailed such a reaction in a woman after she received an injection of lidocaine, a type of anesthetic.

“Metallic taste is interesting, because we really don’t know the biological basis for it,” Nancy Rawson, vice president of the Monell Chemical Senses Center in Philadelphia, said. “There is no metallic taste receptor.”

Sometimes, people interpret the tastes as salty, bitter or rancid.

Vaccinations are known to cause side effects such as arm soreness, slight fever, headache and fatigue. Covid-19 vaccinations are no exception, and some people have reported feeling flulike symptoms for several days after receiving the shot.

The Centers for Disease Control and Prevention’s website notes that “these side effects are normal signs that your body is building protection and should go away within a few days.”

But the agency does not list an unusual taste as a possible side effect of the vaccine.

Such reports are quite rare, Rawson said. AbScent, a nonprofit dedicated to smell disorders, has had thousands of people write in about their Covid-19 experiences. Just a handful reported metallic taste following vaccinations, she said.

While unsettling, the metallic taste is not considered to be dangerous, and should diminish with time, Creech said. The reaction does not “indicate anything that would prevent getting the second dose of vaccine.”

Drinking a lot of water can help saliva get back to its “optimal composition to clear things out of your mouth,” Rawson said.

But because unusual changes in the senses of taste and smell are also well-known side effects of Covid-19, Rawson suggests paying close attention to symptoms in the week following vaccinations.

It’s possible, she said, that those odd tastes could be the result a SARS-CoV-2 infection that occurred just before receiving the vaccination, or before the body has had enough time to build protective antibodies from the shots.

“If you are losing your sense of smell, or you have other types of symptoms,” it would be a good idea to seek a doctor’s care, Rawson said.