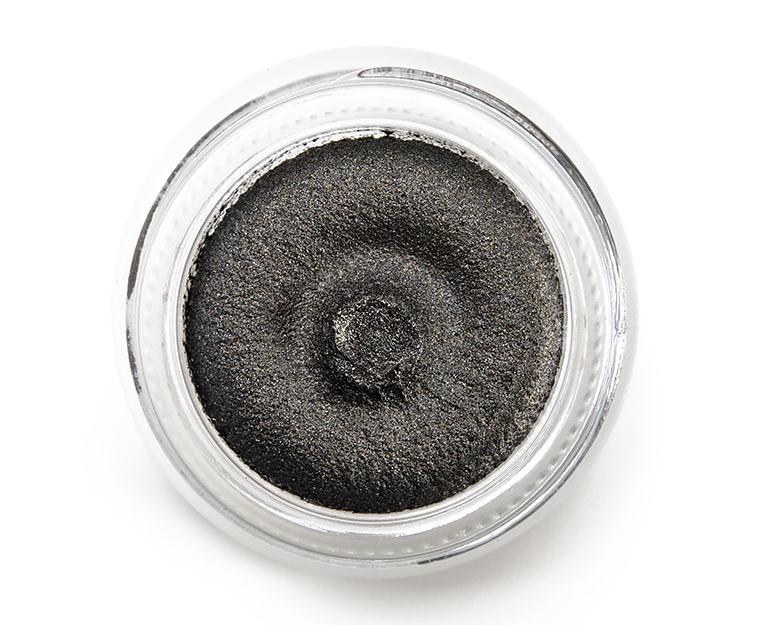 Auric Ego Smoke Reflect Eye Shadow Duo ($39.00 for 0.23 oz.) includes a sparking, warmer pewter powder eyeshadow paired with a dark, grayish-taupe cream eyeshadow. For those who like high-shine, high-sparkle eyeshadows and like a cream eyeshadow that has longer play time, both may appeal. If you tend to wear your cream eyeshadows more sheered out, the darker base of this doesn’t quite lend itself to sheering out as readily as other shades.

Ego (Powder) is a light, golden pewter with warmer undertones and a sparkling, high-shine finish. The texture was smooth, thin but not too dry, and while it was more firmly-pressed, it wasn’t as prone to fallout as something with a loose press but was best used with a moderate hand/pressure. I did find that I preferred application with a dampened brush when trying to use it as a standalone product, while a dry brush or fingertip worked well for using it as more of a layering shade (it seemed intended for both functions).

It had semi-opaque, buildable coverage, though the base itself was more translucent, which was as described by the brand. The product applied evenly to bare skin and had very little fallout, even used dry, as it adhered pretty well. It stayed on nicely for eight hours but had light fallout over time.

Ego (Cream) is a deep, grayish-taupe base with fine, multi-colored pearl throughout that gave it soft sheen. It had rich color coverage in a single layer where a little went a long way. The darker, grayish base made it harder to apply it as a sheer wash and get a really even finish, though. In person, it read more blended than it seemed in the photo, though (kind of like how lip products can settle more or less noticeably “in person” than in a close-up photo).

The texture was smooth, emollient without being as wet as expected; it was a little airier and mousse-like, which gave it good adhesion with greater coverage while remaining blendable along the edges. It was a formula that had more play time, which some may prefer, but I needed to buff/blend out the product on my inner lid area as it settled a bit into fine lines as it was drying down (though this didn’t happen in my actual crease). Once I did that, the product finished drying down and lasted for nine hours before showing signs of creasing.

It is supposed to be “smooth, longwear[ing], [and] creaseless” cream eyeshadow. The texture was a cross between a traditional cream eyeshadow (which can feel wetter and thinner) and an airier, more whipped mousse. It was an intensely pigmented formula where one did not need a lot of product to get an even layer of product on the eye.

They had a moderate dry down time; they did dry down to a more powder-like finish that wasn’t budge-proof–I could still soften the edges a bit–but had a tendency to settle into my fine lines on the inner lid area as it was drying down, so I had to buff the product back out to even the product out. Once I did this, it didn’t keep creasing after the dry down. If I applied and buffed out the product as a sheerer layer of product, then this wasn’t an issue as less product was more apt to dry down fairly quickly compared to a more opaque layer of product.

The consistency dried down but wasn’t thick, heavy, or inflexible, so it paired well with other powder eyeshadows (not just the one included with it) and could be used as an eyeshadow base or eyeliner as well. Aside from the initial creasing (which I could blend/buff out) as it was drying down, once it dried down, I didn’t get creasing until the eight to nine hour mark.