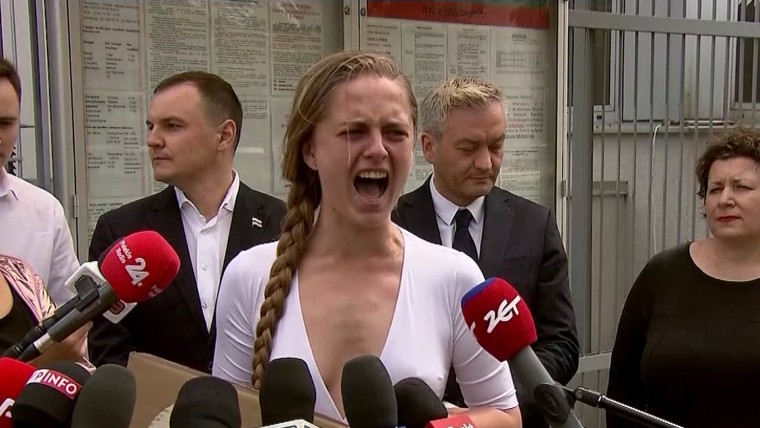 A Belarusian dissident journalist appeared in a video late Monday, less than two days after the passenger plane he was travelling on was abruptly diverted by a fighter jet and forced to land in Belarus’ capital.

In a video released by Belarusian officials and played on state television and social media, Roman Protasevich, 26, speaks in Russian as he says he has no health problems, “including heart or any other organs, and I am being treated by the police absolutely correctly and according to the law.”

The blogger’s detention by the government of Alexander Lukashenko, often referred to as Europe’s last dictator, triggered a furious response from the United Sates, European Union and NATO.

Protasevich’s father, meanwhile, called his son’s detention”total insanity” and dismissed the video as the result of coercion and duress. Dzmitry Protasevich told Reuters in an interview that his son’s face appeared bruised and nose broken and that his language seemed highly scripted.

Protasevich did appear to have bruises and scrapes on his face in the video.

“It’s not his words, it’s not his intonation of speech. He is acting very reserved and you can see he is nervous,” Protasevich’s father said from his home in Poland.

The E.U., which had called Sunday’s plane diversion a “hijacking,” appeared to translate strong language into action, and on Monday announced some aviation links would be cut and fresh sanctions placed on an unspecified number of Belarusian individuals and businesses.

After meeting in Brussels, the 27-nation bloc agreed to ban Belarusian airlines from E.U. airspace and urged “all E.U.-based carriers to avoid overflight of Belarus,” the body said in a joint statement.

The E.U. also called on the International Civil Aviation Organization to investigate the forced landing of the Ryanair flight, which was carrying Protasevich.

President Joe Biden also condemned Belarus for its actions, saying the forced landing was a “direct affront to international norms,” and called for an investigation.

“This outrageous incident and the video Mr. Pratasevich appears to have made under duress are shameful assaults on both political dissent and the freedom of the press,” Biden said in a statement.

However, Western leaders will need to tread carefully to avoid pushing Lukashenko into even closer ties with key ally, Russia.

Lukashenko’s actions may be evidence that he now sees “no downside” to becoming a “rogue state” and places little value on relations with the West, said Keir Giles, a senior consulting fellow of the Russia and Eurasia Program at London-based think tank, Chatham House.

“There could be no clearer statement that Lukashenko has turned his back on the West — and in so doing, placed all his bets on his uneasy relationship with Moscow,” he added.

After authoritarian leader Lukashenko withstood rare, mass demonstrations against his rule after a disputed election in 2020, the E.U. and the U.S. imposed several rounds of financial sanctions against Minsk.

Since the disputed vote, authorities have rounded up thousands of his opponents, with many now in jail or exile, according to human rights groups.

On Twitter, exiled opposition leader, Sviatlana Tsikhanouskaya, called for a global protest in solidarity with Belarusians to take place on Saturday.