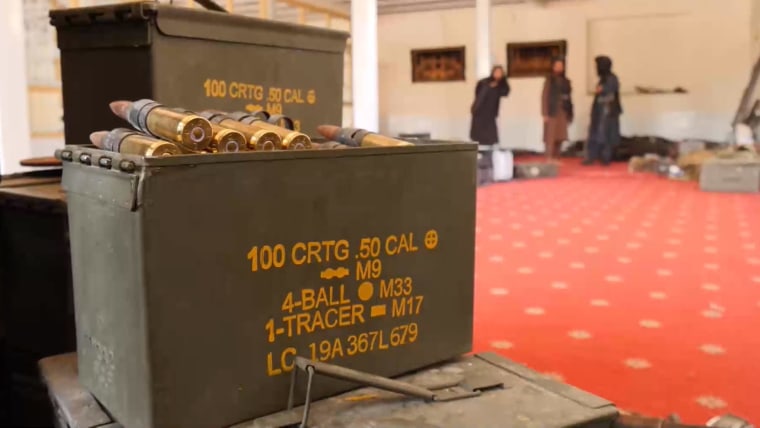 KABUL — The Taliban have showed off containers full of weapons and military hardware seized from the Afghan military as American forces withdraw from the country and the militants continue their march across the country.

The weaponry includes 900 guns, 30 light tactical vehicles and 20 army pick-up trucks, according to NBC News’ U.K. partner Sky News, which was granted access to the Sultan Khil military base in the Wardak province close to the Afghan capital Kabul.

Meanwhile, district after district has fallen to the Taliban. The militants have seized 120 districts since May 1, according to an ongoing assessment by the Long War Journal. The map is a moving patchwork, but at last count the Taliban controlled 193 districts and contested 130, while 75 were under the control of the government or are undetermined, according to the publication that reports on the global war on terror and is a project of The Foundation for Defense of Democracies, a hawkish Washington think tank.

At the same time, many military outposts have been surrendered without a fight, allowing the Taliban to seize weapons, according to multiple Afghan military and government sources.

Sky News filmed fighters carrying new weapons seized from the base, where a white flag signifying the Taliban takeover was flying high.

Walking around wooden boxes full of munitions — some still wrapped in plastic and Styrofoam — Taliban commander Mutman Ehsanulla told Alex Crawford of Sky News that the seizure had won them a slew of new weapons that could be used on the battlefield. Still, he repeated a Taliban talking point — it isn’t the militants who are behind a recent upsurge in violence.

“All people want peace here,” Ehsanulla said. “But the government doesn’t want peace with us.”

A surge of violence, including attacks on intellectuals, journalists and prominent women, has heightened anxiety about what the future holds in the battle-scarred country. The Taliban, which U.S. forces toppled in 2001 after the group sheltered Osama bin Laden, architect of the 9/11 attacks, have denied all responsibility for the attacks.

Still, the Taliban has won the support of some Afghans who are weary after decades of war and of the U.S.-backed government in Kabul, which is widely accused of being riddled with corruption.

The Taliban resurgence is growing after months of largely fruitlesspeace talks between the military group and the Afghan government. With the Taliban growing stronger by the day, there are fears about the group’s willingness to cut any deals with the government in Kabul.

In April, President Joe Biden pledged to withdraw U.S. troops from Afghanistan by Sept. 11, ending America’s longest war that claimed the lives of around 2,300 U.S. troops since 2001. Between 2001 and 2018, some 58,000 Afghan military and police were killed in the violence, according to a study by Brown University.

But the withdrawal comes amid fears it could set the country on a path to a civil war, voiced by the U.S.’s top general in Afghanistan, Austin S. Miller, last week.

The U.S. is still working on agreements to base counterterrorism forces in the region and evacuate Afghan interpreters who could face retribution from the Taliban.

Neither the State Department nor the Pentagon were immediately available for comment.

On Sunday, the group said it is not putting any restrictions on media or women in what they call “newly liberated areas” that they capture. But there have been fears about what the future holds for Afghanistan’s women as the Taliban resurge. Sky News reported that no women appeared in public in the Taliban-controlled area in the Wardak province when they visited. Multiple reports indicate that the militants are clamping down on women and girls’ freedoms and ability to go to school in areas they control.

In Kabul, just an hour’s drive from the seized base in Wardak, a senior Afghan commander pledged to recapture the territories lost to the Taliban.

Gen. Haibatullah Alizai, the commander of Special Operations Command of the Afghan National Army, told NBC News they are still in control of the bigger cities, important highways and critical border points across the country. Most importantly, he said they have secured Kabul to prevent the Taliban from laying siege to the capital and cutting off its supply routes.

“We will fight them and we will push them back,” Alizai said. “We are going to try our best to save this country.”

The elite troops trained by American Special Ops are now carrying out around a hundred operations a day, about 90 percent of the combat missions, according to Alizai.

But the Taliban’s biggest gain so far appears to be psychological.

Last week, American troops quietly left the Bagram Airbase, once a bustling center that saw more than 100,000 U.S. troops pass through its gates, in a huge morale boost for the Taliban and all Islamic extremists presenting the U.S. pullout as a major victory.

Alizai said he was unfazed in his commitment to not allow Afghanistan to once again become a magnet for al-Qaeda and other extremists.

“They are coming, and Afghanistan will be a graveyard for them as well,” he said.

Richard Engel reported from Kabul, Yuliya Talmazan from London. The Associated Press contributed to this report.