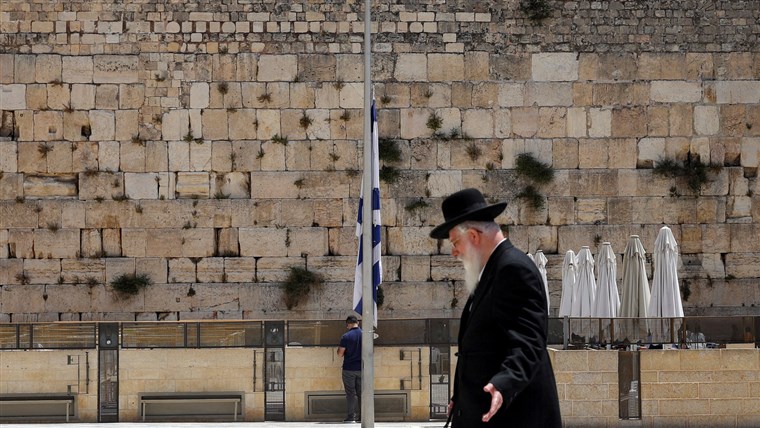 First came the tragedy, then a search for who to blame.

Days after a deadly stampede resulted in the deaths of 45 people at a religious festival in northern Israel, many are now asking who is at fault.

Israel’s government watchdog has said it would open an investigation into the stampede at a Jewish religious festival on Mount Meron, in which the victims were mainly ultra-Orthodox men and children. Yet some, including activists from inside the ultra-Orthodox community, are calling for the ultra-Orthodox to look at their own role in the tragedy as well.

“It’s a call for rethinking what is it that we didn’t do right,” said Yehoshua Pfeffer, the founding editor of the Tzarich Iyun Journal and an ultra-Orthodox rabbi in Jerusalem. “It’s not about the leadership, it’s about us as a community, as a society, because it’s the underlying opinions, the prevailing mindset of the society that is going to be reflected by the leadership.”

Since the stampede, Israeli politicians and the media have questioned whether the government and police were unwilling to place limits on the number of people at the festival to avoid angering ultra-Orthodox leaders. Some have pointed fingers at Prime Minister Benjamin Netanyahu’s government, whose political survival is dependent on ultra-Orthodox political parties, for enabling the community to evade state regulations.

“A functioning government could have prevented the terrible disaster on Mount Meron. Everyone knew,” wrote opposition politician Yair Lapid of the Yesh Atid party, who also called for a state inquiry into the stampede, on Twitter on Monday.

Ultra-Orthodox parties make up a crucial voting block in the Knesset, Israel’s Parliament, and were part of Netanyahu’s narrow coalition government until the election this past March. Though he himself is not ultra-Orthodox, he relies on the support of these parties to remain in power.

Despite their pivotal position in the government, ultra-Orthodox communities remain separate and removed from mainstream Israeli society. Neighborhoods are often segregated, most don’t serve in the Israel Defense Forces, and many men dedicate their day to learning scripture rather than paid work.

This separation, and the vast sums the ultra-Orthodox communities receive in state aid, has caused high levels of resentment in mainstream Israeli society.

The stampede comes after faith in ultra-Orthodox leaders had already been eroded by the pandemic. According to an IDI survey of ultra-Orthodox men between the ages of 18 and 30, nearly 40 percent said that their trust in ultra-Orthodox parties had been “harmed” or “harmed to a great extent.”

That deterioration of trust and demands from the street led ultra-Orthodox politicians to up their advocacy for positions supported by their communities, like fewer coronavirus restrictions, according to Malach.

“The fact is that politicians aren’t really seen as leaders,” said Pfeffer. “Ultimately they are attuned to voice on the Haredi street. Why is it that the Haredi politicians were so intent that the road to Meron would be wide open and everyone would be able to go? The reason they were so intent on this is that they knew that’s what their constituency actually expects from them.”

Still, over the last five days, the focus of many ultra-Orthodox has been directed firmly on the victims and their families as burials took place. Rabbis and spiritual leaders have emphasized the need for prayer and acceptance that this was God’s will, for better or worse.

“People are overwhelmed and depressed, everyone knows someone, and even if they don’t know someone who died, they know someone who was wounded,” said Pnina Pfeuffer, CEO of New Haredim, an umbrella organization for ultra-Orthodox activists who want to see change in the community. “So many people were affected and traumatized.”

Six U.S. citizens and two legal permanent residents were among the victims. Every year on the holiday of Lag BaOmer, tens of thousands of people — most of them ultra-Orthodox Jews — throng to Mount Meron to mark the anniversary of the death of an ancient Jewish rabbi and to light bonfires as part of the celebrations.

Thursday night’s event was the first mass religious gathering to be held legally since Israel lifted nearly all restrictions related to the coronavirus pandemic.

In 2020, the ultra-Orthodox, known in Israel as Haredim, made up around 12.6 percent of the total population and that proportion is set to reach 16 percent of the population by 2030, according to the Israel Democracy Institute think tank.

Yet despite the size and political power of the ultra-Orthodox, the community still sees itself as separate from the state of Israel.

“There is a great suspicion of the state government,” said Gilad Malach, director of the ultra-Orthodox in Israel program at the IDI. “The community looks to the government as a foreign body and not as our government.”

State Comptroller Matanyahu Englman said Monday that he would investigate the actions of all groups leading up to and during the festival as well as the area’s upkeep over the years and whether previous failings had been dealt with. He said he would also aim to come up with a strategy for handling large-scale religious events to “prevent a repeat of this kind of tragedy.”

Though there are voices, like Pfeffer and Pfeuffer, who are encouraging the ultra-Orthodox to separate themselves less from Israeli society, they are on the margins, according to Malach.

“There are more people who feel like this than if you compare to 10 years ago and there is a chance that the phenomenon of being modern ultra-Orthodox will grow and bring change in society. But it’s still the first steps,” said Malach.

For the more modern ultra-Orthodox who are willing to speak out, this particular moment — after the high number of coronavirus deaths among the group, the criticism it came under for not adhering to regulations, and the Meron disaster — is precisely the time for the community to look at its place in wider society, said Pfeffer.