Russia invades Ukraine on multiple fronts; U.S. and allies hit back with sanctions 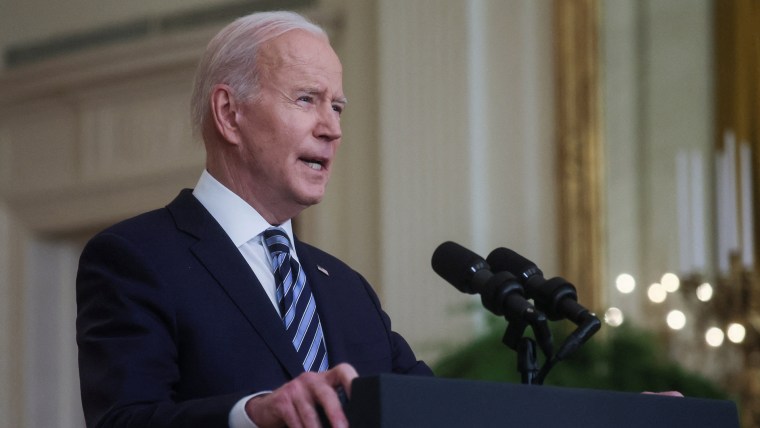 “That means every asset they have in America will be frozen,” he said.

The U.S. also restricted some exports to Russia and targeted elites close to Putin, but the plans stopped short of one of the tougher punitive measures: cutting Russia off from the Belgian financial messaging system known as SWIFT, which links more than 11,000 financial institutions in over 200 countries and territories.

“Putin is the aggressor. Putin chose this war. And now he and his country will bear the consequences,” Biden said.

The administration’s action followed an initial, narrow round of sanctions after Putin moved some troops into Moscow-backed breakaway regions in the eastern part of Ukraine. Biden also announced he was sending additional troops from the U.S. to Germany and Poland, in addition to those already deployed to and redeployed within Europe in the last several days.

The Group of Seven leading economic powers also denounced Putin in a joint statement after a meeting on the conflict, promising “severe and coordinated economic and financial sanctions.”

“President Putin has reintroduced war to the European continent. He has put himself on the wrong side of history,” their statement said. The G7 exhorted the international community to “stand shoulder to shoulder with Ukraine, and raise their voice against this blatant violation of the fundamental principles of international peace and security.”

NATO said the attack was “unjustified and unprovoked” and a “serious threat to Euro-Atlantic security,” adding that it was deploying additional forces to the “eastern part of the alliance, as well as additional maritime assets.”

The U.S. and the United Kingdom also announced sanctions against Belarus for assisting the invasion. The Biden administration’s sanctions took aim at state-owned banks, the country’s defense and security industries and a number of its “regime-connected officials and elites,” the Treasury Department said. “We call on Belarus to withdraw its support for Russian aggression in Ukraine,” the White House said in a statement.

As the military strikes and battles unfolded across the country, Ukrainian officials reported that cruise or ballistic missiles had targeted military control centers in the area of the capital, Kyiv. Air raid sirens were broadcast across the city, and explosions were seen and heard there and in other cities, NBC News reporters on the ground said.

The missile attacks and shelling by Russian forces also targeted airfields, military depots and Ukraine’s infrastructure around the country, with dozens of Russian troops, as well as Ukrainian soldiers and civilians, killed in the fighting, Ukrainian officials said.

A senior U.S. defense official said Russia had launched more than 160 missiles since the strikes began.

In remarks posted on Telegram, Zelenskyy renewed his calls for Ukrainian citizens to aid the defense forces, asking everyone with military experience to offer themselves in the effort.

“The sounds that we hear today are not only missile strikes, explosions and rockets — it’s the sound of the Iron Curtain falling down and closing Russia from the other civilized world,” he said.

“Unfortunately, we have many losses among our heroes, but we also have the Russian military taken hostage,” he said. “We have destroyed a lot of Russian aviation and military equipment. I see that many Russians are shocked with what is happening. Some of them started posting in social media that they’re against this invasion.”

Ukraine said the Russian military was attacking with the help of Belarus, where Russian troops have been deployed for months. Surveillance video broadcast online by the Ukraine’s Border Guard Service showed tanks and armored vehicles crossing into Ukraine from Belarus, and ballistic missiles were fired from there in a southwestern direction, the government said.

Battles also took place in Hostomel just outside Kyiv, the home to an international cargo airport, as well as in the areas around Kharkiv in the east and Kherson in the south, Ukrainian officials said.

The government also reported “mass cyberattacks” on its websites. NBC News was not immediately able to confirm the government reports of casualties, battles and troop movements.

A senior U.S. defense official said Russia was “making a move on Kyiv,” adding that the U.S. assessment of Putin’s actions is that Russia has “every intention of basically decapitating the government and installing their own method of governance.”

Russia’s moves indicate that the invasion is only in its initial phase, the official said.

“We have not been surprised so far with what we have seen them do,” the official said. “It is very much in line with what was expected.”

Retired Adm. James Stavridis, a former supreme Allied commander of NATO and an NBC News contributor, said in an interview on the “TODAY” show that he thought Russian forces would likely try to capture Zelenskyy.

In his televised address, Putin said he was seeking the “demilitarization” of Ukraine, arguing that the West had pushed too far in trying to draw the country into the NATO alliance. He also alleged that there were Nazi elements within Ukraine, a claim that experts said was false.

He has also claimed that Ukraine was subjecting Russian speakers to “genocide,” an assertion for which there is no evidence and which international monitors on the ground reject.

Russia’s aim is the “neutralization of Ukraine’s military potential,” Putin’s spokesman, Dmitry Peskov, said at a news briefing after the incursion was launched. Russia was not talking about occupying Ukraine, he said.

There is little evidence of Russia’s claims of Ukrainian aggression, and the U.S. has warned for months that Moscow was trying to manufacture a pretext to start a conflict.

Fear and gridlock in Kyiv

As dawn broke over the capital Thursday, NBC News’ Erin McLaughlin reported that residents were “terrified.”

“They have been staying up all night monitoring the situation, and there has been an element of disbelief up until this point that the Russians would go after the capital,” McLaughlin said.

Highways out of the city of 3 million were gridlocked with vehicles as families tried to flee, according to live television pictures and NBC News journalists in the city. There were also long lines at ATMs, grocery stores and gas stations.

The mayor announced a curfew from 10 p.m. to 7 a.m. and opened subway stations as shelters for residents.

In the northeastern city of Kharkiv, less than 20 miles from the Russian border, explosions rang out in the distance and many stores appeared to be closed as people stocked up on food and gasoline, NBC News foreign correspondent Matt Bradley reported. Russian tanks stood near the city’s ring road, the mayor said, adding that the subway stations were the safest places for residents.

Meanwhile, more than 3,100 Ukrainians were evacuated from the Donetsk and Luhansk regions in the east, with more evacuations expected Thursday, according to Ukraine’s Infrastructure Ministry.

Leading up to the invasion, Russia had surrounded Ukraine on three sides, with 150,000 troops, in addition to air and naval forces. The buildup, along with Moscow’s bold security demands, prompted fears of an invasion for weeks and stark predictions of civilian and military casualties.

After the fighting began, Ukrainian Foreign Minister Dmytro Kuleba tweeted that “the world can and must stop Putin,” while at the United Nations, Ukrainian Ambassador Sergiy Kyslytsya spoke directly to his Russian counterpart, saying: “There is no purgatory for war criminals. They go straight to hell.”

Thursday’s invasion comes eight years after Moscow annexed Ukraine’s Crimean Peninsula and backed pro-Russian separatists in the country’s east, a conflict that has killed an estimated 14,000 people and remains unresolved. Shelling escalated there in recent days, followed by Russia’s recognizing the breakaway regions’ independence and sending in troops for so-called peacekeeping operations.

The Kremlin said Wednesday that the separatist leaders in eastern Ukraine had asked for military assistance to defend against what it has called Ukrainian “aggression.”