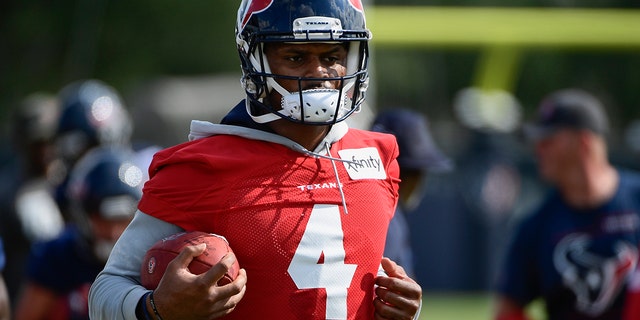 Deshaun Watson’s future with the Houston Texans remains in question, but the star quarterback reportedly has a new set of teams interested in his services for the 2022 NFL season.

Watson is waiting to resolve sexual misconduct allegations against him, and it’s uncertain any team would make an offer to the Texans for Watson until any potential criminal charges against him and civil proceedings are resolved.

According to ProFootballTalk.com, there are multiple teams that would consider acquiring Watson. The Tampa Bay Buccaneers and Minnesota Vikings are two teams reportedly planning on making pitches for the quarterback.

Deshaun Watson of the Houston Texans prior to a game against the New England Patriots at NRG Stadium Nov. 22, 2020, in Houston. (Carmen Mandato/Getty Images)

The Vikings will have first-year head coach Kevin O’Connell leading the way. Although O’Connell has made it clear the Vikings have confidence in quarterback Kirk Cousins. Tampa Bay, on the other hand, will need to find a successor to quarterback Tom Brady, who retired a few weeks ago.

So there’s a good chance head coach Bruce Arians makes a play for Watson, especially since he has a team poised to win another Super Bowl.

New Texans head coach Lovie Smith didn’t comment on Watson’s future in Houston. Instead, Smith talked about quarterback Davis Mills being the starter next season, Mills’ second in the league.

“You don’t give out starting positions in the spring, but I love what Davis has done. He’s our quarterback going into the season,” Smith told Rich Eisen, via ProFootballTalk.com. “There’s a lot of positions I’m worried about. Quarterback is not one of them.

“I love what Davis Mills did last year; I feel real good about Davis leading our team. We’ve just got to get better people around him,” Smith added.

According to Watson’s lawyer, Rusty Hardin, the grand jury is expected to make a decision on possible criminal charges against Watson by April 1, less than one month before the 2022 NFL Draft in Las Vegas.