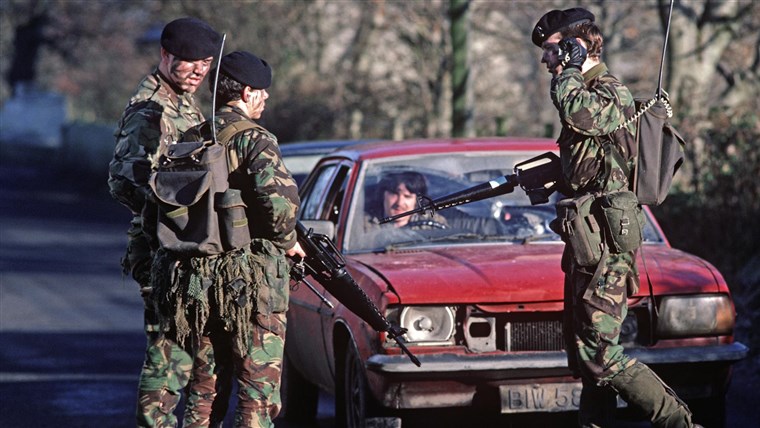 LONDON — It is often said that funerals can be a time to build bridges, and Prince Philip’s is apparently no exception.

A day after the Duke of Edinburgh, the husband of Queen Elizabeth II, was laid to rest, the leader of Sinn Fein, the Irish nationalist party that was traditionally the political wing of the outlawed Irish Republican Army, expressed sadness for the 1979 assassination of Lord Mountbatten, Prince Philip’s uncle.

“I am sorry that that happened, of course that is heart-breaking,” said Mary Lou McDonald, the leader of Sinn Fein, said on British radio over the weekend in response to a question asking if she would apologize to Prince Charles.

Mountbatten, who had served as a leader in Britain’s armed forces and as the last viceroy of India, was killed by an IRA bomb in Ireland while on a boat trip for pleasure. The explosion also killed three others, including including a 14-year-old boy who was Charles’s godson.

The assassination was a major victory for the IRA at the time.

Mountbatten was one of more than 3,600 people killed during “the Troubles,” the 30-year conflict between mostly Protestant “unionists” who want Northern Ireland to remain part of the U.K., and mostly Catholic “republicans” who want to reunify with the Republic of Ireland. Northern Ireland is politically part of the U.K. but shares a land border with the Republic of Ireland.

The conflict ended in 1998 with the Good Friday Agreement, a landmark peace deal brokered by the U.S. that among other things, allowed the militarized Irish border to be erased.

In her comments on Times Radio, McDonald also included the caveat that “the army and the armed forces associated with Prince Charles carried out many, many violent actions on our island.”

However, she added that she has “an absolute commitment and an absolute responsibility to ensure that no family faces that again.”

“And I am happy to reiterate that at the time and on the weekend that your queen buried her beloved husband,” she said.

The remarks come as violence has flared in recent weeks in Northern Ireland, largely in loyalist areas, provoked by rising tensions over post-Brexit trade rules for the region. Political leaders on all sides have condemned the unrest and appealed for calm.

McDonald’s apology was viewed by experts as more than just an olive branch to the royal family.

“This is another way of trying to show to people in Northern Ireland that the conflict is over, that they have moved on, that they can acknowledge pain, that they can be respectful,” said Edward Burke, an assistant professor of international relations at the University of Nottingham.

“It doesn’t mean, however, that Sinn Fein are distancing themselves from the type of campaign and type of violence that the IRA visited on Britain and Ireland for so many years.”

Sinn Fein surprised the Irish political establishment in an election in February 2020 by securing more votes than any other party for the first time on a vow to fix the country’s housing and health systems. The country is run, however, by a coalition government, and Sinn Fein is in the opposition.

The apology wasn’t the only way that McDonald reached out to the royal family in the radio interview. She also said that Charles, who in 2015 said that Mountbatten represented the grandfather he never had, had written to her last year when she was sick with Covid-19 and wished her well.

“I thought that was most decent and kind,” she said. “We have the utmost respect for that family, and for who they are and what they represent to British people, and indeed, maybe most particularly, to unionists and loyalists here on the island.”

Despite the pleasantries, tensions on the isle are on the rise.

Brexit has sparked talk of the reunification of the Republic of Ireland and Northern Ireland in a way that wasn’t taking place five years ago, and there may have been deeper political calculations at play in her remarks, according to Connal Parr, who specializes in Irish history and the Troubles at Northumbria University.

“The broader political purpose is that Sinn Fein think unionists will hear this or see this and say, ‘Oh they are sorry, there is some level of remorse on that attack on the British royal family, which we believe passionately in,’” he said.