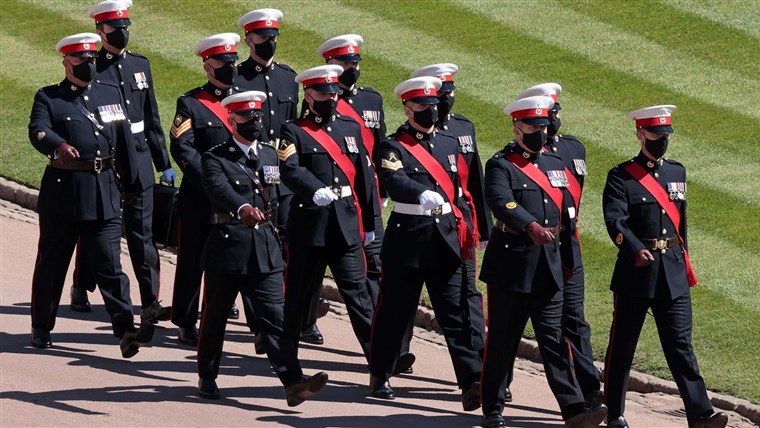 WINDSOR, England — Legend has it he was born on a kitchen table on the Greek island of Corfu almost a century ago. On Saturday, he was delivered to a royal vault on the grounds of Windsor Castle.

Ahead of the funeral, riders from the King’s Troop Royal Horse Artillery made their way up the Long Walk toward Windsor Castle, and military personnel and royal guards all in ceremonial dress took up their positions in Windsor’s Quadrangle beneath a blue sky.

Rows of military marching musicians played pieces of music, including “I Vow to Thee My Country” and “Jerusalem,” after members of the royal family not in the procession departed for St. George’s Chapel.

Waiting for him in the ancient chapel was the queen, dressed all in black and wearing a matching mask against the pandemic.

The queen, 94, who has called her husband her “strength and stay,” sat alone and at a remove from the other attendees, who were limited to 30 and maintained social distancing in accordance with the country’s Covid-19 rules.

Her grandson Prince Harry also sat alone. It was his first public appearance with the royal family since he and his wife, Meghan, the Duchess of Sussex, gave a tell-all interview to the media mogul Oprah Winfrey in the United States last month.

The Duke of Edinburgh — the longest-serving consort of any British monarch — was remembered for his dedication to the queen.

“We have been inspired by his unwavering loyalty to our queen, by his service to the nation and the Commonwealth, by his courage, fortitude and faith,” said the Rev. David Conner, dean of Windsor, who conducted the funeral service that Philip himself planned. “Our lives have been enriched through the challenges that he has set us, the encouragement that he has given us, his kindness, humor and humanity.”

His coffin was draped with his personal flag, and placed on top was his sword, a naval cap, a flower wreath — and a letter from his wife.

The funeral service lasted less than an hour. After Philip’s casket was lowered into the royal vault, his many titles were proclaimed and a lament was played by a pipe major of the Royal Regiment of Scotland.

When it was over, the queen stood up and, walking slowly, left the chapel.

‘No fuss or bother’

His is not a state funeral, as Philip was not a monarch, but rather a ceremonial funeral akin to the burial of the queen mother in 2002.

Still, hundreds assembled outside the castle despite officials asking crowds not to gather before the funeral. Mourners arrived carrying photos and paintings of Philip, and shop windows displayed depictions of the queen’s husband.

“He has died the way he lived — with no fuss or bother,” Ailsa Anderson-Cole, a former press secretary to the queen, told NBC News on Saturday, referring to the scaled-backed funeral service. “Prince Philip has probably got the kind of ceremony that he would have wanted.”

The ceremony, laced with personal touches, began with an eight-minute procession and was followed by a service in St. George’s Chapel at Windsor Castle — the location of Harry and Meghan’s spring wedding just under three years ago.

In contrast to that jubilant event, the funeral for the charismatic and at times cantankerous prince was somber and scaled down due, in part, to coronavirus restrictions.

Ahead of the chapel service at 3 p.m. local time (10 a.m. ET), a national minute of silence was held.

In a widely anticipated moment, Prince William and his brother, Harry, walked together behind their grandfather’s coffin during the ceremonial procession, along with their father, Prince Charles, and a handful of royals — none wearing military uniforms.

Although William and Harry didn’t walk side by side — their cousin Peter Phillips between them — the image conjured up memories of the pair as boys walking mournfully behind the coffin of their mother, Princess Diana, in 1997, accompanied by their grandfather.

Meghan, pregnant with the couple’s second child, remained in California.

Dressed in dark suits and looking somber and reflective, the members of the royal family donned their masks as they entered the doors of the chapel.

Protocol suggests that Harry, who undertook two tours in Afghanistan, can only wear a suit with medals at royal functions. But he lost his honorary military titles after deciding to step back as a senior working royal last year.

Making the short journey from castle to chapel, Philip’s coffin was transported in a purpose-built Land Rover that the duke began designing 18 years ago, according to palace officials. The specially adapted hearse was modified to a dark bronze green at his request, with final changes made in 2019.

The vehicle was flanked by military pallbearers and parade bands in keeping with Philip’s military affiliations.

Philip lived a peripatetic youth after his father, Prince Andrew of Greece and Denmark, was banished and his family fled Greece. Philip joined Britain’s Royal Navy where he excelled, serving in World War II, and married the then-Princess Elizabeth.

After she became queen in 1952, he carved out a socially unusual role for the times, supporting his wife but always one step behind her — in public at least.

“There was no precedent. If I asked someone, ‘What do you expect me to do?’ they all looked blank. They had no idea,” Philip told the BBC of his early days as the sovereign’s husband.

Many will remember him for being an early advocate of British science and industry and a champion for conservation and the environment.

Regarded as a no-nonsense straight-talker by some, Philip was also in the news over the years for racist and insensitive remarks. For many, though, the service will highlight his legacy of loyalty and service to the crown and efforts on behalf of the environment, among other work.

In 2011, Philip reflected on his own unique role.

“I reckon I’ve done my bit,” he said in an interview with the BBC to mark his 90th birthday.

“It’s better to get out before you reach the sell-by date.”