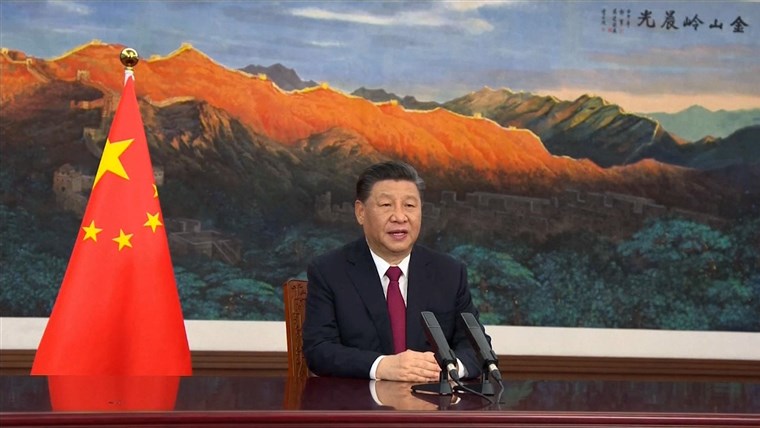 After sharing a photo of herself on social media wearing a colorful shirt from the Swedish clothing giant H&M, Beijing resident Li Ang’ang received a torrent of comments urging her to delete the post and stop lending support to foreign powers seeking to “destroy China.”

Shrugging off the criticism, Li, 33, told NBC News she would continue to share fashion items she liked from Western brands, “as long as they are pretty and highly cost effective.”

But other Chinese consumers, social media influencers and celebrities have instead moved to boycott fashion retailers such as H&M, Nike and Burberry, as Beijing pushes back with growing ferocity against allegations of human rights abuses and forced labor targeting the country’s Uyghur Muslim minority in Xinjiang — home to 20 percent of the world’s cotton supplies.

The boycott backlash has left Western companies in an uncomfortable position.

With some 1.4 billion people, China is the world’s second-largest economy and commands vast purchasing power, making it a lucrative market for retailers.

But socially-conscious young shoppers in Western countries have also looked for brands to take a stand on ethical issues linked to their products, from climate change to labor conditions.

As the United States and its allies put pressure on China through sanctions, deeming the treatment of Uyghurs “genocide” — allegations Beijing denies — many brands expressed concern about reports of forced labor.

Some even joined the Better Cotton Initiative, a global trade group of more than 2,000 members seeking to promote good practice in the industry. But their commitment to those stances has been tested as Chinese consumers, inflamed by the ruling Communist Party, appear determined to punish those who have taken a stand on Xinjiang.

“It is quite a tricky position. Companies flocked to China over the last 25 years with one purpose in mind: to make money,” economist and author George Magnus told NBC News. Now, they’re faced with a “huge dilemma.”

At the center of the storm — stoked by state media and officials after a year-old statement on the subject resurfaced on Chinese social media — H&M, has now vowed to earn back the support of Chinese consumers.

“China is a very important market to us, and our long-term commitment to the country remains strong,” the company said in a statement after last month’s backlash. “We are dedicated to regaining the trust and confidence of our customers, colleagues and business partners in China.”

The company also said it wanted to be a “responsible buyer” in China and elsewhere and was “actively working on next steps with regards to material sourcing.” It did not specify what those steps would be.

“I don’t think a company should politicize its economic behavior,” Xu Guixiang, a Xinjiang government spokesman, said at a news conference last month. He compared some brands’ efforts to distance themselves from cotton produced in the region to “lifting a stone to drop it on one’s own feet.”

The German fashion giant Hugo Boss has also found itself struggling to appease both markets.

The company told NBC News in September it had asked its direct suppliers around the world to prove their products did not come from Xinjiang, saying it “does not tolerate forced labor.”

Facing similar calls for a boycott, however, the company issued a statement on its official account on the Chinese social media platform Weibo last month that stated it would “continue to purchase and support Xinjiang cotton,” which it said was “one of the best in the world.”

In response to a request for comment, Hugo Boss — which in recent years apologized for the use of forced labor at its factories that made uniforms for Nazi soldiers during World War II — said the Weibo post was unauthorized and did not reflect its current position.

“We value our long-standing relationships with many partners in various locations in China,” the company said in its most recent statement on its website. “So far, Hugo Boss has not procured any goods originating in the Xinjiang region from direct suppliers.”

Japan’s Muji seemingly affirmed its openness to using cotton from Xinjiang in a statement online last week, but said it was “taking all necessary steps to respect human rights and manage labor standards.” After sportswear brand Fila’s Chinese affiliate said it would continue to use cotton from Xinjiang and would look to withdraw from the Better Cotton Initiative, the company’s headquarters appeared to distance itself.

“FILA Holding’s position on forced labor and sourcing of raw materials remains the same as communicated over the course of 2020 and 2021,” said Jamie Jeong, a spokesperson for FILA Holdings, referring to a corporate statement in which the company said it “would continue to work with industry trade groups to find global solutions for this complex problem.”

In the weeks since the initial boycott backlash, images on Chinese state television were subject to censors who rushed to blur out Western brand logos on sneakers and sweaters. Meanwhile, some H&M stores seemingly vanished from prominent Chinese search engines and e-commerce sites, according to The Associated Press.

With Xinjiang a key exporter of the world’s cotton supplies, the scope of the problem for businesses is “tremendous” and presents a real “test of corporate integrity,” said Penelope Kyritsis, director of strategic research at the Worker Rights Consortium, a U.S.-based labor rights monitoring organization.

“The line is pretty clear,” Kyritsis told NBC News. “Consumers don’t want to be complicit in crimes against humanity.”

More than 1 million Uyghur Muslims are believed to be held in internment camps in the region where they are forced to study Chinese law, venerate the CCP, renounce their religion and work in factories, according to human rights groups and first-hand accounts from Uyghurs.

In January, the U.S. announced it would halt all imports of cotton from the Xinjiang region and in March the Biden administration slapped sanctions on Chinese individuals due to alleged abuses there.

Chinese officials have rejected these claims. The government contends that courses at what they call “educational and vocational training centers” will help Uyghurs to find future employment and are necessary to fight extremism.

“Fundamentally, this is really about values and belief systems,” he said.

And while China may represent a growing market for retailers, socially-conscious millennials and Gen Z shoppers in the U.S. and Europe also represent a “numerically significant” demographic that can’t be ignored, he added.

As of 2019, these younger Americans outnumber the ‘baby boomer’ generation and make up just over half of the U.S. population, according to an analysis by the Brookings Institution think tank.

The choices businesses make now could have long-term ramifications for their brands, both in China and Western countries.

“I think companies have unwittingly found themselves right in the middle of this adversarial tussle and there will be a price to pay,” Magnus said, “whichever way they choose to act.”

The corporate Catch-22 is also being exacerbated by strained relations between Beijing and Washington, with some U.S. companies warning that Washington’s stance on China could hurt their bottom line.

“I’m hoping that we can sort of separate intellectual property, human rights and other things from trade and continue to encourage a free trade environment between these two economic juggernauts,” Calhoun told the U.S. Chamber of Commerce Aviation Summit last month.

“We cannot afford to be locked out of that market. Our competitor will jump right in,” he added.

The Department of State and the White House did not respond to requests for comment.

Despite the commercial retaliation and online noise, in reality “Chinese brands are still not as powerful as Western brands” among middle-class Chinese shoppers, said Rana Mitter, director of the University of Oxford China Centre.

Mitter said that calls for boycotts may boost nationalism and support for the ruling Communist Party but are likely to inflict less economic harm than expected.

“So far, it’s not clear whether the rise in short-term patriotic feeling is necessarily actually really changing long-term consumer behavior,” he added.

Yang Zhengmeng, 35, a sportswear blogger from Henan, said he would be taking part in the boycott of Western brands over their stance on Xinjiang, even though it meant giving up his favorite Nike running shoes.

“Because of this, I will personally have to change trainers,” he said. “Although it affects me a little, I’ll still uphold this boycott to the end!”