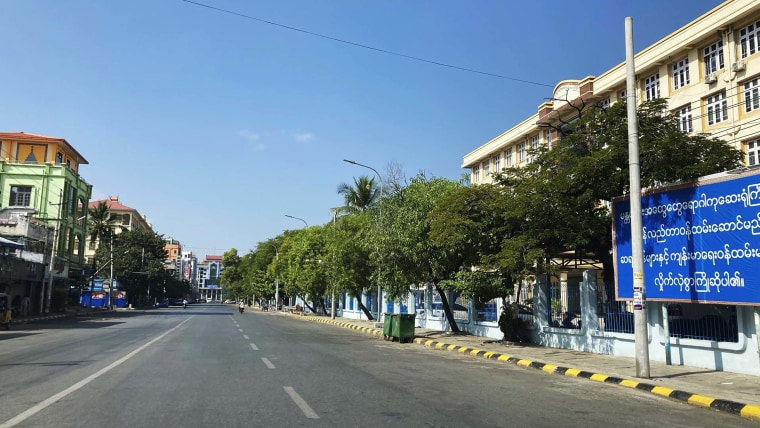 “There are similar cases taking place across the country at this point, especially in the northwest of Myanmar,” Kyaw Moe Tun, who refused to leave his position as Myanmar’s United Nations envoy after the military seized power, told the AP. “Look at the pattern, look at the way it’s happened….it is systematic and widespread.”

The military, known as the Tatmadaw, did not respond to several requests by phone and by email for comment. Three days after the Done Taw attack, the state-run Global New Light of Myanmar newspaper dismissed reports of the slayings as “fake news,” accusing unidentified countries of “wishing to disintegrate Myanmar” by inciting bloodshed.

Since the military seized power in February, more than 1,375 people have been killed by soldiers and police, and more than 11,200 arrested, according to the AAPP.

In May, the opposition National Unity Government announced a new military wing, the People’s Defense Force, and in September declared a “defensive war.” Loose-knit guerrilla groups calling themselves PDF have since emerged across the country, with varying degrees of allegiance to the NUG.

An early example of the military unleashing its battle-tested tactics on majority Buddhist areas came just 23 miles up the river from Done Taw in Kani township. In July, images circulated of massacres in four small villages that Myanmar’s ambassador to the United Nations called “crimes against humanity.” Four witnesses told the AP that soldiers killed 43 people in four incidents and discarded their bodies in the jungle.

“We all live in fear,” said a woman whose brother was killed, who like the other villagers asked to remain anonymous for safety.

The army’s attacks in Sagaing are thought to be the opening salvo in a campaign to stamp out resistance in Myanmar’s northwest, and recent troop movements suggest violence could soon pick up.

Two military convoys of more than 80 trucks each with troops and supplies from Sagaing have made it to neighboring Chin state, according to an opposition group. And a former military captain, who deserted in March, told the AP that soldiers in Chin State were resupplied and reinforced in October, and the army is now stockpiling munition, fuel and rations in Sagaing.

“We’re talking about the Bamar heartland that basically should be the core foundation of this military,” said Manny Maung, a researcher for Human Rights Watch. “It’s telling how worried the military is of its own people.”

As fresh soldiers have flowed into Chin state, residents have reported troops putting down protests with live rounds and brutal beatings.

A teacher in the town of Mindat said the military fired artillery into the town so the “houses would shake like an earthquake,” she said. She fled to India in October after her cousin, a member of the PDF, was killed by a sniper.

A half-day’s drive west from Mindat lies Matupi, a town with two military camps that is now bereft of its young people, according to a college student who fled with her two teenage brothers in October. She said the military had locked people into houses and set them alight, hid bombs in churches and schools, killed three protest leaders she knew and left bodies in the middle of roads to terrorize people.

Thantlang, a town near the Indian border, has also been emptied of its people after four months of heavy fighting, according to the Chin Human Rights Organization. Drone footage shot by the group in October and December and seen by the AP shows fires raging inside buildings and charred churches, collapsed schools and ruined homes. The footage matches fires detected by satellites and interviews with villagers. NBC News has not been able to verify this footage.

Still, there are growing signs the military’s strategy of intimidation may be steeling people’s resistance rather than leaving them cowed.

“Instead of dying fleeing, I will use my life for a purpose,” said one Kani survivor.

Likewise, the farmhand who told the AP about the Done Taw massacre is now defiant, vowing to take up with the PDF.

“I have just decided to fight until the end for them,” he said. “I will do whatever I can until I die or until I am arrested.”