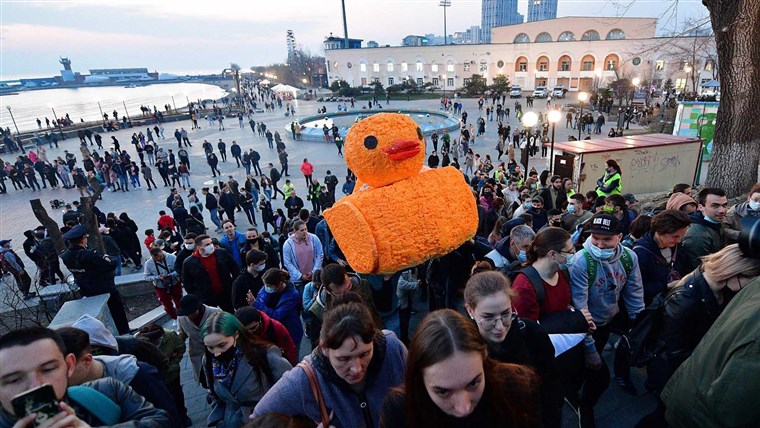 In an Instagram post, Navalny said he would end the strike that he began on March 31 to demand medical care from his personal doctor.

It comes days after protests across Russia calling for Navalny’s release, as his team said it feared the Kremlin critic’s life was in danger. Navalny was detained earlier this year having returned to Russia following treatment in Germany after being poisoned with a deadly nerve agent.

“Thanks to the huge support of good people across the country and around the world, we have made huge progress,” Navalny said on Instagram on Friday, the 24th day of his hunger strike.

He said he would continue to demand a visit from his doctor to address a loss of sensation in his legs and arms, but said he would stop refusing food after he was examined by non-prison doctors, which he called “huge progress.”

Navalny’s allies said at the weekend that his life was hanging by a thread and a medical trade union with ties to the prominent opponent of Russian President Vladimir Putin said he was in a critical condition. It cited medical tests which it said showed that his kidneys could soon fail, which could lead to cardiac arrest.

Navalny has previously accused prison authorities of threatening to put him in a straitjacket to force-feed him. Russian authorities accuse him of exaggerating his medical condition to grab attention, and of refusing prison medical care. They have pledged to ensure he survives.

The fate of the 44-year-old is adding to already severe strains in Russia’s ties with the West.

President Joe Biden’s national security adviser Jake Sullivan said on Sunday that the government had told Russia “there will be consequences” if Navalny dies in prison.

On Friday Russian troops began withdrawing from the country’s border with Ukraine and returning to their bases, an apparent de-escalation after a massive buildup that had caused alarm — and fears of conflict — from Western Europe to Washington.

On Wednesday, hours before hundreds of pro-Navalny protesters were arrested at demonstrations across the country, Putin used his annual state of the union address to warn other nations not to provoke Moscow by crossing “red lines.”

Putin did not reference Navalny or Wednesday’s protests in his speech, instead focusing on the economy, social aid and the Covid-19 pandemic.

Navalny was poisoned and almost died while conducting a corruption investigation in Siberia last summer.

He was airlifted to Germany for treatment, where it was determined that he had been poisoned with the Soviet-era nerve agent Novichok. Navalny claims the poisoning was ordered by Putin — an accusation which has been strenuously denied by the Kremlin.

He was arrested in January on his return from Germany, where he had spent five months recovering, much of it in a medically induced coma.

The following month he was sentenced to two years and eight months in prison after a Moscow court turned his suspended sentence in a 2014 fraud case into a full custodial term.

Russian authorities had asked the court to turn into a three-and-a-half-year term because of alleged parole violations.

Navalny has always maintained that the case was fabricated against him to curb his political ambitions. The European Court of Human Rights deemed that the conviction was politically motivated.

A thorn in Putin’s side for years with his anti-corruption investigations into the Kremlin elite, his latest investigation into a luxurious palace allegedly belonging to Putin has been viewed more than 100 million times on YouTube. The Russian president has denied he owns the palace.