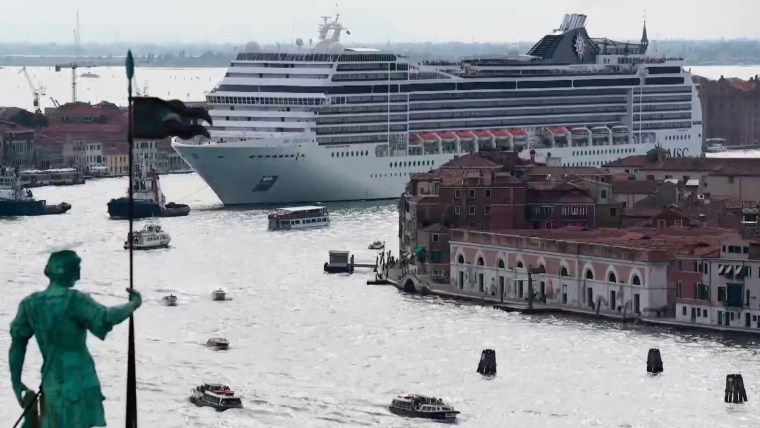 In what he called a “historic” day, Italy’s culture minister Dario Franceschini said the ban adopted by the Italian cabinet will take effect Aug. 1 and will cover the lagoon basin near St. Mark’s Square, Venice’s most iconic landmark.

Ships will also be banned from St. Mark’s Canal and the Giudecca Canal, a major marine artery which ships previously used to reach Venice’s port.

The ban applies to ships weighing more than 25,000 tons, longer than 590 feet or with other characteristics that would make them too polluting or overwhelming for Venice’s marine environment. Cruise liners typically weigh four times the new limit and can reach more than 200,000 tons.

Franceschini said the government decided to act fast “to avoid the concrete risk” that the U.N. culture agency UNESCO, which protects the fragile city and its lagoon, would add Venice to its list of “world heritage in danger.”

“It is a decision awaited by UNESCO, by all the people who have been to Venice at least once in their lives, by Italian and foreign travelers who were shocked to see these ships passing through the most fragile and beautiful places in the world,” Franceschini told reporters.

Venice is one of the world’s most famous tourism destinations, attracting an estimated 25 million visitors a year. Many of them come on cruise ships, straining the city’s already overcrowded tourism infrastructure and overwhelming its delicate marine environment.

Residents and environmentalists have battled for decades to stop cruise ships from coming into Venice to protect its ecosystems, fragile building foundations and cultural heritage, but change has been slow with the cruise ship industry being a major source of income for the city.

Environmental activist Jane Da Mosto, executive director of the nonprofit group We Are Here Venice, told NBC News in a WhatsApp message Wednesday she was glad the “nightmare of cruise ships in the city” was ending.

The Italian government earlier this year pledged to get cruise ships out of the Venice lagoon, but did not provide a clear timeline. Last month, it said that it was organizing bids for a workable alternative outside the lagoon as the first 92,000-ton cruise ship since the pandemic began sailed through Venice — to both jubilation and protests.

But now, the government said it “wanted to give a strong acceleration” to implement the move given the looming UNESCO review, Franceschini said in a statement.

In announcing the ban, the Italian government said it planned to build five docks that would be able to accommodate cruise liners away from the Venice lagoon at the mainland port of Marghera, a 10-minute boat ride from Venice.

At the moment however, Marghera lacks suitable docking for cruise ships.

Giovanna Benvenuti, spokesperson for the cruise terminal in Venice, told NBC News it may take years to build the new docks in Marghera as authorities would have to dredge a canal that leads to the port first.

With cruise liners gone for the foreseeable future, Benvenuti said thousands of port workers will risk their jobs.

Cruise ship business accounts for 3 percent of the city’s gross domestic product and that around 4,000 jobs depend on it, according to the Venice Port Authority.

The Italian government promised compensation to those affected by the ban, namely shipping companies, terminal managers and service providers, but did not specify the amounts or the timeline.

“We welcome the decision by the government as we have been waiting and calling for 10 years for an alternative route for cruise liners,” Francesco Galietti, Italian director of the international cruise industry trade association CLIA, said.

Marco Gorin, head of moorers at Venice port, said he and his colleagues are sad, disappointed and angry.

“They have been talking about an alternative route for cruise liners for the past 10 years, and we were never against it,” Gorin told NBC News. “But we didn’t expect the government to ban cruises without finding a solution first.”

He is worried about how the ban will affect thousands of people like him, whose livelihoods depend on the cruise ship industry.

“It will take years to build the new dockings. What will we do in the meantime?” Gorin added.