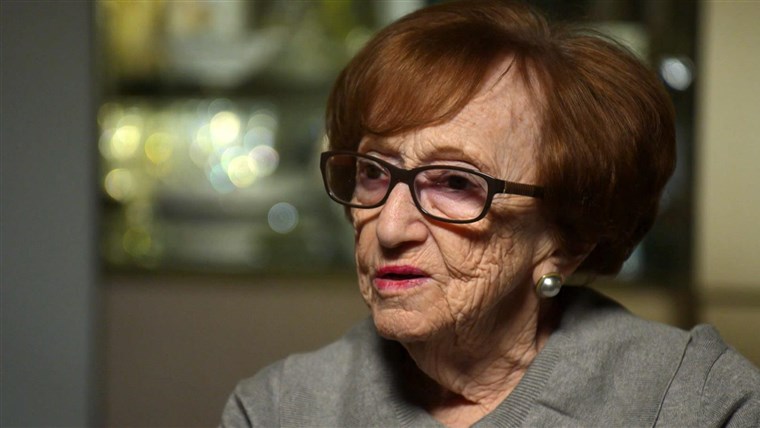 LONDON — Abe Foxman was a year old when the Nazis ordered his parents to report to the Jewish ghetto in Vilnius, Lithuania, in 1941.

His nanny, a Catholic, told them to leave the child with her, expecting that they would be back several weeks later.

Foxman’s stay with her ended up lasting years, until his parents returned. He moved to America in 1950 at the age of 10 — but his early life experience has never left him.

“I am a survivor, an example of what good words can lead to,” Foxman, 80, said. “My nanny risked her life for four years protecting me and hiding me, giving me a false identity.”

Foxman, a former director of the Anti-Defamation League, is one of several high-profile survivors to join a new campaign, #ItStartedWithWords, reflecting on the origins of the Holocaust.

The campaign is spearheaded by the New York City-based nonprofit Claims Conference, which works to secure compensation for survivors from the German government. It is supported by the United Nations and Holocaust museums around the world, and is being launched on the Jewish community’s Holocaust Remembrance Day on Thursday.

And the new drive for awareness comes as polls show an increase in anti-Semitism around the world, as well as a lack of awareness among adults under 40 about the Holocaust.

The Claims Conference polled 1,000 adults in what it said was the first 50-state survey of Holocaust knowledge among millennials and Generation Z. It showed that nearly half the respondents could not name a single one of the concentration camps or ghettos established during World War II. More than half were unable to identify the Auschwitz-Birkenau death camp, and 11 percent believed that Jews caused the Holocaust.

Meanwhile, the FBI reported that more than 60 percent of religion-based hate crimes were directed at Jews in 2019, and a poll released in March by the Anti-Defamation League and YouGov showed that 63 percent of Jews in America say they’ve either experienced or witnessed some form of anti-Semitism in the last five years.

“Around the world, it’s become more acceptable to hate, to demonize, dehumanize other people, and we are seeing it now with Asian Americans,” Greg Schneider, Claims Conference executive vice president, said.

“People don’t wake up one day to say I want to commit mass murder today, but it’s a process that over time people are dehumanized. That starts with words and ideas,” he added.

Research published last month by the Center for the Study of Hate and Extremism at California State University, San Bernardino, showed that hate crimes targeting people of Asian descent rose by nearly 150 percent in 2020.

In a video produced for Claims Conference, the former leader of Germany’s Jewish community recalled how at the age of 4, she was one day no longer allowed to play with other children across the street from her Munich home.

“The apartment manager came out and screamed at me, ‘Jewish children are not allowed to play with our children,’” Charlotte Knobloch, 88, said. “I didn’t even know what Jews were.”

The push for the campaign came from survivors, the youngest of whom are now in their late 70s and worried that the lessons of the Holocaust are now being forgotten.

“There is a politicization, there is a lack of truth, lies abate, there is no consensus on civility, no one listens to each other. All taboos have been broken on respect and tolerance,” Foxman said. “Sadly enough, 75 years after the Holocaust, this is a time to remind people what words can do.”