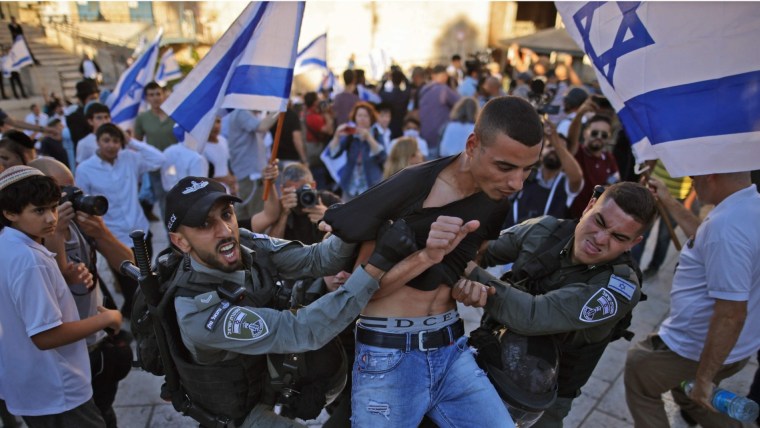 It posed an early test for Israel’s new prime minister, Naftali Bennett, and his ideologically disparate government, but eventually a compromise was reached with Jewish settlers over an unauthorized outpost in the occupied West Bank.

Under the agreement, 53 families will leave the hilltop south of Nablus, Daniella Weiss, the head of the outpost’s settler group, told NBC News this week.

A survey will be carried out to prove that the settlement, named Eviatar after an Israeli killed by a Palestinian in 2013, was established on state land and not land owned privately by Palestinians, Weiss said. The plan is to set up a religious school and then for families to eventually return, she added.

An Israeli government official confirmed that an agreement had been reached.

Weiss said that she was not satisfied with the deal but that she had chosen the less favored option because “the alternative is a terrible clash between thousands of settlers and thousands of soldiers.”

The outpost posed a challenge to Bennett’s fledgling government, which took power last month. The new prime minister is a supporter of Jewish settlements and opposed to Palestinian statehood. But he presides over a patchwork coalition of right-wing, centrist and left-wing parties that include lawmakers who oppose settlements and favor a Palestinian state.

The compromise with settlers will be a blow to left-wing factions in Bennett’s coalition and indicates, analysts said, that his government is not moving the dial away from former Prime Minister Benjamin Netanyahu’s expansionist policies.

“There has been a reckoning within the government,” said Mairav Zonszein, a senior analyst at the International Crisis Group, which works to prevent war. “But ultimately this compromise deal is really just a de facto approval of the outpost remaining.”

Interior Minister Ayelet Shaked, a member of Bennett’s pro-settler Yamina party, tweeted Wednesday that the agreement was “an important achievement” for settlement in the land of Israel and thanked “the pioneers of Eviatar who with devotion demonstrate what Zionism is.”

But Omer Barlev, the minister for public security and a member of the center-left Labor party, tweeted that the “illegal outpost should be evacuated simply because they are illegal.”

Most of the international community considers settlements in the West Bank to be illegal. Outposts like Eviatar have been established without government permission and without a valid property title and are consequently illegal under Israeli law as well as international law, according to Yuval Shany, a professor of international law at the Hebrew University in Jerusalem.

In the nearby village of Beita, Palestinians have been protesting daily. Five people have been killed in clashes with Israeli troops and hundreds injured, according to a Beita resident, Mohammad Khabeesa.

The Israeli military said violent riots had involved hundreds of Palestinians throwing stones at Israeli forces who responded using “riot dispersal methods.” Investigations had been opened into the five deaths, the military said.

“If that settlement remains there, it’s an occupation,” he said. “The Israeli government, the army and the settlers all have an agreement — they’re all the same to me.”

Israel captured the occupied West Bank from Jordan in the 1967 Mideast war, but Palestinians want the territory to form part of a future Palestinian state.

In the Al Bustan area of the east Jerusalem neighborhood of Silwan, Israeli authorities also demolished a Palestinian butcher’s shop Tuesday and 15 families are at imminent risk of losing their properties, according to the Norwegian Refugee Council.

Amani Odeh, 34, whose home is in danger, said the new coalition had already accelerated the policies of the last government in east Jerusalem.

“They destroy people’s hope,” she said, adding that residents now depended on international intervention and law to protect them.

The Biden administration has pressed Israel to refrain from taking unilateral steps that could hinder the eventual revival of the peace process, which has been moribund for more than a decade.

Daniel Seidemann, an Israeli expert on Jerusalem, said that while he thought the new government would be more attentive to voices coming from the United States and Europe than Netanyahu’s was, it remained unclear whether that would affect policy.

“After 54 years of occupation and 12 years of Netanyahu, the settler ideology is the DNA of official Israel and the organs of Israeli government,” Seidemann said.

The situation in Eviatar indicated that the people who make the decisions are not brave enough to take on the settlers, but these policies could change with time, effort and courage, he said.

“I don’t know who Bennett is because I suspect that he doesn’t know who he is either,” Seidemann said. “We’re about to find out.”