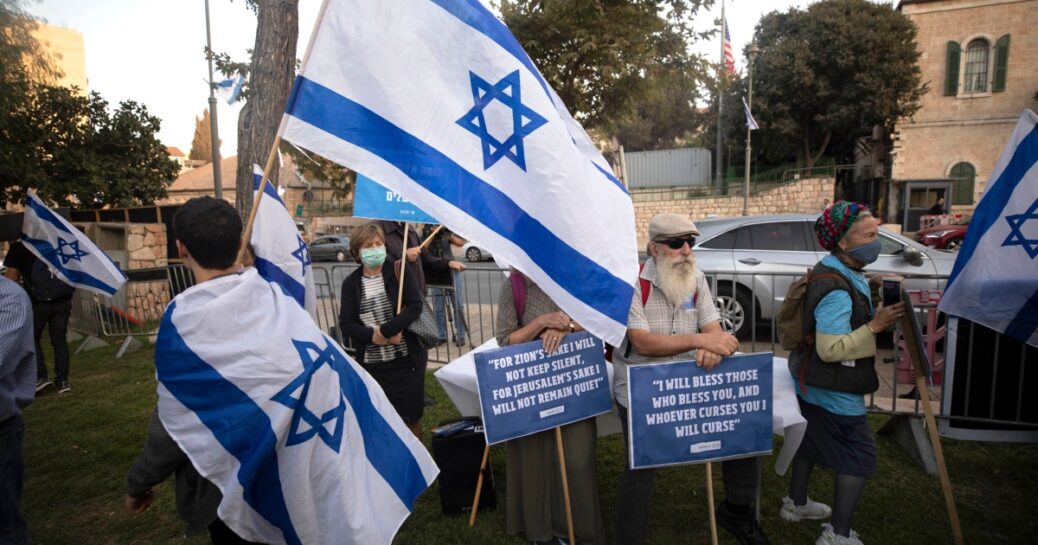 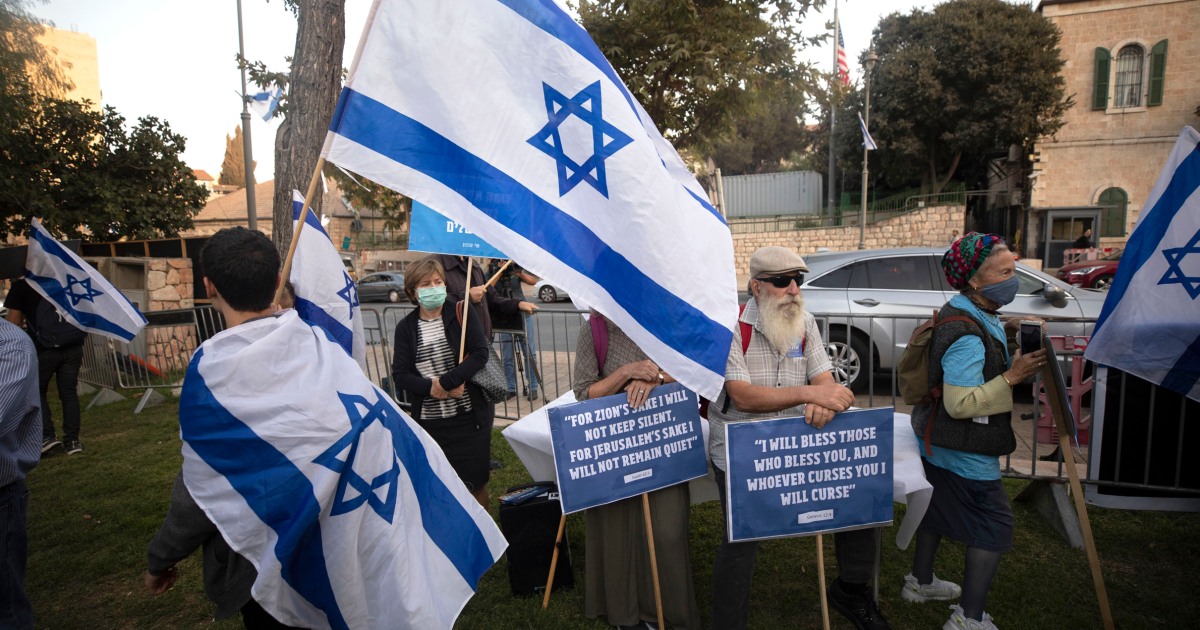 A leading Israeli politician’s lobbying campaign against reopening a U.S. consulate for Palestinians in East Jerusalem has been amplified on Facebook by a network of fake accounts, according to research shared with NBC News.

The politician, former Jerusalem Mayor Nir Barkat, a challenger to replace Benjamin Netanyahu as the leader of Israel’s opposition party, Likud, has spent time in Washington in recent months lobbying lawmakers not to reopen the consulate, which former President Donald Trump closed in 2019 after his administration recognized Jerusalem as Israel’s capital.

The office provided consular services to Palestinian residents in Jerusalem, the West Bank and Gaza. President Joe Biden pledged when he took office to reopen the consulate and use it to rebuild diplomatic ties with Palestinians.

Since August, Barkat’s Facebook posts about the issue, including photos of Barkat with members of Congress, such as Sens. Ted Cruz, R-Texas, and Lindsey Graham, R-S.C., and House Minority Leader Kevin McCarthy, R-Calif., have been shared by a network of at least 320 accounts determined to be fake by the Israeli disinformation research company FakeReporter. The researchers said such fake engagement can shape public perception of a politician’s popularity and game Facebook’s news feed algorithm so posts reach much larger audiences than they would organically.

They said the research highlights Facebook’s failure to effectively crack down on inauthentic networks that amplify political campaigns.

“We believe that this work is critical to our life as citizens and to democracy,” said Achiya Schatz, the executive director of FakeReporter. “It’s frustrating that companies like Facebook, which have so much power over democracies, are not doing more to defend us and keep the spaces they have created safe. It is not good enough.”

Schatz said his team suspects, based on the complexity of the behavior of the profiles, that the network is made up of so-called sock puppet accounts, which are controlled and deployed centrally by humans, most likely working for a digital agency that lets customers pay to boost their digital popularity, rather than fully automated bots.

The offices of Cruz, McCarthy and Graham did not respond to requests for comment.

Facebook faces increasing scrutiny from members of Congress after a substantial leak of internal posts and documents was released to The Wall Street Journal and a consortium of media organizations, as well as to Congress and the Securities and Exchange Commission. The documents, released by Frances Haugen, a whistleblower and former Facebook employee, have shown how Facebook has struggled to police its platform for harmful content.

Margarita Franklin, a spokesperson for Meta, Facebook’s parent company, stressed that the company has made efforts to address inauthentic behavior on the platform.

“We removed the majority of these accounts for fake likes and shares,” Franklin said, referring to the network identified by FakeReporter, which NBC News shared with Facebook. “We go after a range of inauthentic activities facing our entire industry — from fake engagement to sophisticated influence operations.”

She said it can be difficult, if not impossible, to prove whether the beneficiary of such fake engagement — in this case Barkat — was the one paying for it, because the transaction would have taken place outside Facebook’s platform.

Since the accounts FakeReporter has determined to be inauthentic started promoting Barkat’s posts by sharing and liking them, the average number of monthly shares on his Facebook posts have increased from 111 to 675 compared to his posts over the previous three years. That, the researchers say, creates a false impression of political support in Israel for his lobbying activities.

Among the posts FakeReporter researchers believe to have been artificially amplified by the network is a photo of Barkat shaking Cruz’s hand at a meeting in September. In the caption, Barkat said he discussed the “danger of establishing a Palestinian consulate in Jerusalem.” The post was shared more than 1,200 times, but because of user and group privacy settings on Facebook, researchers could see only a small fraction of the shares. FakeReporter manually reviewed 150 of the shares and found them all to be from accounts it determined to be part of the network.

Josh Drill, a spokesperson for Barkat, denied any connection to the network’s activities.

“Nir Barkat, who is leading the fight against the opening of an American consulate for the Palestinians in Jerusalem, has no need for such services and has never used fake accounts as the false claim insisted,” he said. “Barkat conducts his campaign against the division of Jerusalem through meetings with dozens of senators and members of Congress and expresses his position in the international media, which is viewed by tens of millions of people.”

He added that Barkat’s Facebook page has “over 180,000 likes with hundreds of comments and shares on each post.”

FakeReporter’s research, which was also shared with the Israeli newspaper Maariv, shows how most of the accounts in the network were created in the same week in August 2018 and appeared to belong to users in Nepal, with local usernames, languages and interests. In the summer of 2019, the accounts were changed to show Israeli profiles, with Hebrew names, profile pictures and interests.

In some cases, the accounts still show apparent Nepali profile pictures alongside the pictures purporting to of be Israeli users. Others use profile photos generated by artificial intelligence-powered tools like This Person Does Not Exist or real photos taken from Russian escort sites. Many profiles have apparent gender mismatches between the Hebrew names and the profile pictures. In some cases, fake accounts have been created using the identities of Israelis whose names are completely unique — discovered by cross-referencing names with a leaked national voter registry.

The accounts in the network mostly follow one another and have promoted the content of the same Israeli businesses and products, including a nail salon, a children’s book and an interior design company. Schatz said that indicates that the network is available for hire by customers seeking to boost their digital presences.

Before it promoted Barkat’s posts, the network also promoted a project to build a wind farm in northern Israel, which attracted widespread opposition from residents. FakeReporter noticed this week that profiles in the network have been writing posts defending an ultra-Orthodox writer, Haim Velder, after three women alleged that he had sexually exploited them — allegations that Velder denied in a statement to the Israeli newspaper Haaretz. He did not respond to a request for comment through his lawyer.

FakeReporter had identified a section of the same network that appeared to promote the content of another Israeli politician, Orly Levy-Abekasis, in July. FakeReporter reported more than 180 accounts to Facebook at the time, and the company removed 83 percent of them.

Levy-Abekasis denied having any connection to the network’s activities in a statement to the Israeli business publication Calcalist.

Schatz said: “These kinds of tactics are attacking every aspect of life for Israeli citizens. If we cannot process valid and reliable information, our decision-making is being made on false information. It’s an attack on the very foundation of competition ideas we want in a democracy.”

FakeReporter’s research echoes findings previously disclosed by former Facebook data scientist Sophie Zhang, a whistleblower who in a September 2020 internal memo described how fake engagement created by networks like the one identified by FakeReporter could be used to distort global politics. Zhang had spent many months at Facebook discovering and internally reporting suspicious networks promoting political content in Honduras, Azerbaijan, Mexico, Italy and other countries.

“Sometimes the appearance of popularity can be more important than popularity itself,” said Zhang, who said that was typically more an issue in “authoritarian countries or smaller countries.”

When FakeReporter researchers shared their previous findings with Facebook over email in July, they characterized the activity as suspected “coordinated inauthentic behavior,” a term Facebook uses to describe covert influence operations involving complex fake personas designed to mislead people about who is behind an operation to manipulate public debate for a strategic goal.

However, according to the emails exchanged between Facebook and the researchers, which were reviewed by NBC News, Facebook said the activity did not meet the threshold for coordinated inauthentic behavior and was instead an example of fake engagement, which is when people or businesses pay for services to make their content look more popular than it would normally be — even though the beneficiary of the engagement boost was a politician.

“It’s an artificial distinction, and the effect on the public is the same,” Schatz said. “In the end, it’s a question of ‘Are we, the users, being hurt or not? Are we safe or not?’ That’s what the public cares about.”

“But with fake engagement it can be more difficult to find evidence that the politician is knowledgeable or responsible for the inauthentic behavior, which is probably why Facebook is being cautious about it,” she said.

Disinformation expert Emerson Brooking, a resident senior fellow at the Digital Forensic Research Lab at the Atlantic Council, a nonprofit think tank, agreed that it is difficult to determine who has paid for such fake engagement.

“But this sounds like potentially different treatment for different countries,” he said. “If this was a Russian or Iranian campaign in which previous spam commercial assets have been turned to false amplification for political purposes, I think [Facebook] would take them more seriously.”

Facebook denied that it treated certain countries with more leniency and pointed to previous takedowns of Israeli accounts for coordinated inauthentic behavior.

Brooking said that regardless of how Facebook categorized the activity, it was a “foreign spam network that is ultimately trying to influence American citizens and U.S. policy.”

“This is not good for our democracy,” he said.