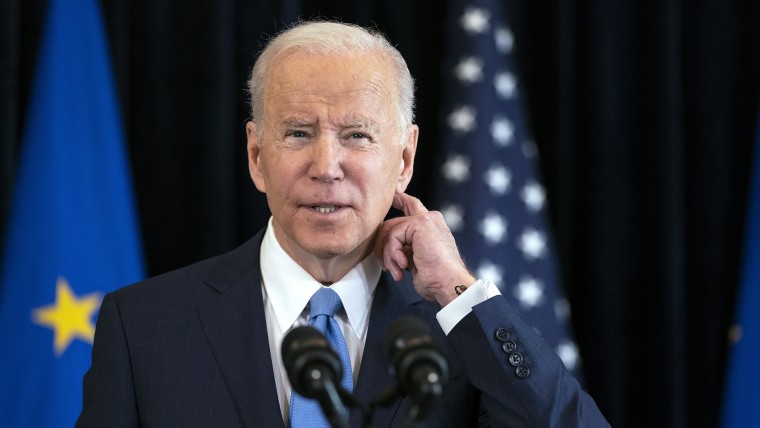 WARSAW, Poland — President Joe Biden on Friday traveled to southeastern Poland, where he intends to meet with U.S. troops and aid workers assisting refugees in a country on the front lines of the humanitarian and military crisis unfolding in Ukraine.

Biden is scheduled to visit Rzeszow to thank the thousands of U.S. troops who began arriving at a military base there last month. The base in Poland is less than 100 miles from where Russian missiles struck a Ukrainian military post this month. Before he returns to Washington on Saturday, Biden said, he will try to meet with some of the refugees.

“I’ve been to refugee camps, I’ve been in war zones for the last 15 years, and it’s devastating,” Biden said at a news conference Thursday. He said meeting with refugees in Poland would “reinforce my commitment to have the United States make sure we are a major piece of dealing with the relocation of all those folks.”

Poland has borne the brunt of the refugee crisis, with more than 2 million Ukrainians having flooded into the country. While Poland has welcomed the refugees with open arms, providing them with the ability to work, health care and schooling for children, the massive influx in just a month has begun to strain cities like Warsaw, where the population is estimated to have grown by 300,000.

“Poland is among the top countries that feel the most at risk over this ongoing invasion. You had bombs going off not far from their border,” said Barry Pavel, who was a defense policy adviser in the administrations of President George W. Bush and Barack Obama. “This is a really, really important stop.”

Biden is visiting Poland after a series of meetings with world leaders Thursday in Brussels, Belgium, where he sought to rally other countries to do more to support Ukraine and punish Russia.

“I know that eliminating Russian gas will have costs for Europe. But it’s not only the right thing to do from a moral standpoint, it’s going to put us on a much stronger strategic footing,” he said before heading to Poland.

While he is there, Biden will also meet with Polish President Andrzej Duda to “discuss how the United States, alongside our allies and partners, is responding to the humanitarian and human rights crisis that Russia’s unjustified and unprovoked war on Ukraine has created.”

The White House announced it would allow as many as 100,000 Ukrainians to enter the U.S., with a focus on those who are most vulnerable. The administration also plans to allocate more than $1 billion toward humanitarian assistance and $11 billion over the next five years to address worldwide food security threats after the disruptions to the Russian and Ukrainian agricultural industries.

The U.S. has provided $123 million to help the countries bordering Ukraine deal with the crisis, including $48 million to Poland, with U.S. officials working to set up programs that provide refugees with temporary assistance for food, accommodations and medical care, along with legal aid and mental health support, the White House said.

The White House on Thursday announced a package of new sanctions against Russia that would apply to more than 400 Russians and Russian entities, including the Duma and more than 300 of its members and more than 40 defense companies.

It also said it would take additional steps to prevent Russia from trying to prop up its economy, such as making it clear that any transactions involving gold related to banks there are prohibited, and calling on corporations to no longer conduct their activities with Russia in a business-as-usual manner.