Austria has gone into lockdown again. The far right sees an opportunity. 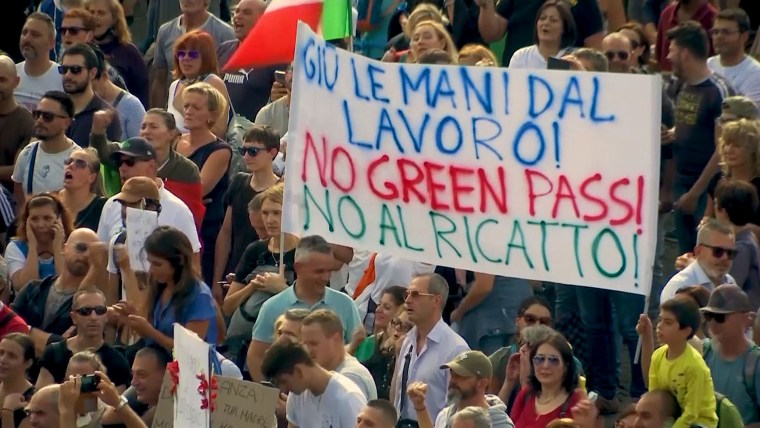 LONDON — As the Covid-19 crisis in Europe intensifies, so too have the cries of protest from those opposed to the lockdowns and vaccine mandates now faced by parts of the continent.

While vaccine skepticism is nothing new in the region, the sometimes violent demonstrations of the last few days and weeks have a relatively new element: the radical far right.

On Tuesday, the World Health Organization described the challenge faced by Europe as “very serious,” with almost 4,200 deaths a day recorded last week — compared to 2,100 a day in September. The overall death toll across the continent could rise from the current 1.5 million to 2.2 million by spring 2022, the WHO said.

But that warning came after a weekend of protests against measures to curb the virus. Police said 40,000 protesters descended on downtown Vienna, the home of one of the continent’s worst outbreaks, which entered its fourth national lockdown Monday.

The Vienna rally was organized by the far-right Freedom Party, the third biggest political party in Austria, which experts say has used the pandemic to further its anti-establishment credentials and re-establish public support after a high-profile scandal.

At least one “Q” sign was on display in Vienna, signaling support for QAnon, the outlandish conspiracy theory associated with some supporters of former President Donald Trump and some participants in the Jan. 6 Capitol attack.

Similar protests and signs could be seen in Belgium, the Netherlands, Italy, Germany and Croatia.

Freedom Party Chairman Herbert Kickl has championed the anti-vaccine movement in Austria. Kickl himself tested positive for Covid in the days before Saturday’s rally, forcing him to stay home.

“He has politically mobilized against the Covid-19 vaccines,” said Katharina T. Paul, an expert on vaccine hesitancy at the University of Vienna. “He has disseminated misinformation, to put it mildly.”

“I think he and the Freedom Party play a significant role in the mobilization of the politicalization of the vaccine,” she added. “What’s particular about Austria, especially recently, is the relationship between populism on the one hand and vaccine hesitancy on the other. This is not specific to Austria — we’ve seen it in Italy and France — but Austria does stand out.”

Austria has a long history of vaccine hesitancy, but what’s happening now is unprecedented, Paul said.

The Freedom Party — which did not respond to a request for comment — jointly ruled Austria for 16 months until a scandal brought down its leader and chancellor at the time, Heinz-Christian Strache, in 2019. Austria is currently governed by the center-right Austrian People’s Party, in a coalition with the Austrian Greens.

From February 2022 all Austrians will be required to get vaccinated, making it the first European country to impose such a rule — and adding fuel to the anger over Covid restrictions.

Austria’s current 10-day lockdown comes after new cases peaked on Nov. 19 at more than 15,000, in a country of less than 9 million people, with health experts expecting worse to come. So far 64.4 percent of the total population is fully vaccinated, below the European average and far behind countries such as Spain where the figure is almost 80 percent.

“Why the rate is not higher, and it is not that low compared to other European countries, is definitely due to the fact that they always swept the side effects under the table,” said voter Sabine Amsellem-Gaisbauer from Upper Austria, who declined to divulge any personal details and who opposes vaccine mandates.

She was adamant that vaccine take-up is so low because people have decided the vaccines on offer don’t work. Evidence from across the world has shown vaccines are highly effective at lowering the chance of infection, serious illness and death from Covid.

Professor Richard Greil, an infectious diseases expert in Salzburg and a frequent commentator on the pandemic in Austria, said the government has lost control of the narrative on the issue, leaving others able to step in.

“The strategy that has been chosen has been very bad; the communications about vaccines has been insufficient,” he said. “And we have particularly relevant right-wing parties, [supported by] about 20 percent of the voters, and there is very good evidence worldwide that the more right-wing the relevant parties are, the lower the vaccination rates.”

In September, another Austrian party, the newly formed MFG — which in German stands for “People, Freedom, Fundamental Rights” — also rode the wave of vaccine populism by winning 6.4 percent of the vote in Upper Austria’s regional election, enough to win three seats in the state Parliament.

The result illustrated a potential new fault line in Austrian and European politics: whether or not a party supports Covid restrictions.

“You can see the potential there: Now we have two parties that are trying to exploit these feelings, this scepticism among people, with about 25 percent to 30 percent of people opposed to vaccines [in Austria],” said Thomas Hofer, an Austrian political consultant.

As the virus has evolved, so too has the right-wing response to it, he argued.

“Make no mistake about it, at the beginning of March 2020 [Kickl] was the first one, even before a lockdown, who said we should close our borders so the coronavirus can’t get in,” he said. “Over the pandemic he really discovered the potential [of opposing vaccines] and he also knows this might go on even when the pandemic is over. They’re trying to hammer that message to occupy those values.”

Those values have helped the relationship between the political right and anti-vaccine groups grow for years in the United States and elsewhere, according to Emily Sullivan, a philosophy and ethics professor at Eindhoven University of Technology in the Netherlands. She is involved in a project that’s monitored social media posts in the two communities since 2016.

Fringe elements of the far right in the U.S., such as the QAnon conspiracy, have similarly ridden a combination of the pandemic and social media to new heights.

“The anti-vaccine community has really converged on language and talking points with the Republican Party and far-right parties,” she said. “Before, in 2016, we would have thought that was surprising.”

“There’s a natural trust between the two groups, and that’s increased and converged,” she said.

While Austria is the first European nation to re-enter lockdown and introduce a compulsory vaccine mandate, it may not be the last.

Jens Spahn, the German health minister, delivered a stark assessment this week: Germans, he said, would be “vaccinated, cured or dead” by the time winter has ended.