The Code Must Go On: An Afghan Coding Bootcamp Becomes a Lifeline Under Taliban Rule

Home Uncategorized The Code Must Go On: An Afghan Coding Bootcamp Becomes a Lifeline Under Taliban Rule 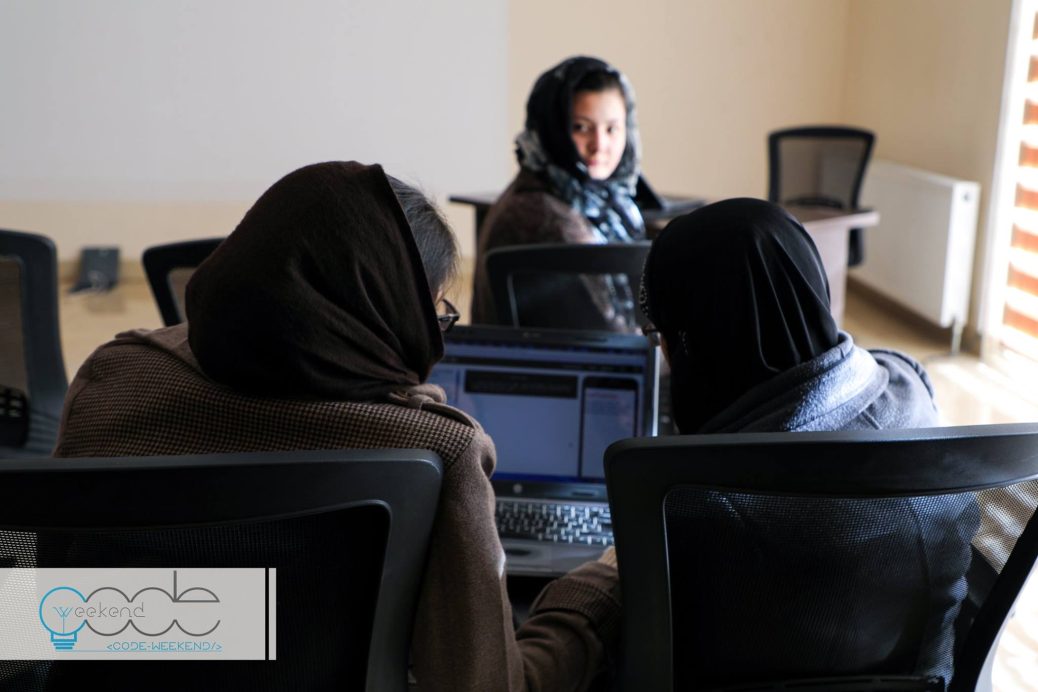 Four months after the Afghan government fell to the Taliban, 22-year-old Asad Asadullah had settled into a new routine.

In his hometown in Afghanistan’s northern Samangan province, the former computer science student started and ended each day glued to his laptop screen.

Since late October, Asadullah had been participating in a virtual coding bootcamp organized by Code Weekend, a volunteer-run community of Afghan tech enthusiasts, with content donated by Scrimba, a Norwegian company that offers online programming workshops.

On some days, Asadullah took a screen break for a game of pickup soccer, but generally he didn’t see his friends that much anymore. Under the Taliban regime, “old friends are getting so depressed,” he explains, and there was only so much of that he could handle. Instead, he tells me, “my life is on my computer.”

Asadullah is one of the millions of young Afghans whose lives, and plans for the future, were turned upside down when the Taliban recaptured Afghanistan last August. When the capital fell, Asadullah had two semesters of college left, and he was thinking about his post-graduation plans. He wasn’t picky about his first job; anything that let him save up some money would do. But he had bigger plans: Asadullah wanted to start his own software company and share his love of computer science by teaching university and high school students. “When I start coding, I can forget everything,” he says.

Today, those plans are on pause—and no one knows for how long. The country’s economy is in free fall, the United Nations warns of famine, and in the meantime, Afghanistan’s new rulers have offered little by way of solutions to its citizens.

In such dire circumstances, a coding bootcamp—a remnant of a brief period of techno-optimism in Afghanistan—may seem out of place. But for its participants, it offers hope of a better future—though whether such a future is still possible in Afghanistan remains to be seen.

When the Taliban swept into power in August, it was unclear what their rule would mean for the Internet in Afghanistan. Would they cut off Internet access? Use social media posts—or government databases—to identify and target their former enemies? Continue to wage their own increasingly effective public affairs campaigns?

As it turned out, the Taliban did not cut off access to the Internet—at least it has not yet. Instead, for those Afghan students who can afford the Internet at home—especially women and girls, whom the regime has officially banned from secondary and higher education—online learning has become one of the primary sources of education.

Some of this is well organized, with encrypted virtual classrooms set up by international supporters, while some is entirely self-directed—learning through YouTube videos, perhaps, or playlists of TED talks. And often it falls somewhere in between, making use of free or discounted online learning platforms.

Code Weekend’s virtual bootcamp falls into this latter category. Seventy-five participants were accepted into the cohort and are working their way through Scrimba’s Frontend Developer Career Path, a series of 13 interactive video learning modules that cover everything from HTML and CSS basics to tips on handling job interview questions about JavaScript or GitHub.

Participants can complete the modules on their own time and in their own homes, with Code Weekend volunteer mentors checking in weekly to answer questions, ensure that they stay on track, and assist with logistics as needed—including providing Internet top-up to keep participants online. According to organizers, roughly 50 members of the original cohort are active.

Ensuring Internet connectivity is just one of the logistical and financial challenges of running a bootcamp, even a virtual one, in Afghanistan. Another is contending with power outages, which become more frequent every winter. In an attempt to solve both these problems, Code Weekend has been trying to crowdfund the costs of 3G credit and backup electricity through generators and battery storage units.

But there’s another issue that worries organizers: “what the Taliban think,” says Jamshid Hashimi, the software engineer who started Code Weekend with friends seven years ago. The group doesn’t want to find out. “So far, we avoided interactions with them,” he says.

In a way, the bootcamp’s virtual, asynchronous format helps Code Weekend stay under the radar. It makes it far easier for women, whose freedom of movement has been drastically curtailed under the Taliban’s extreme interpretation of Islam, to participate without leaving their homes—or even interacting with male participants, which might also provoke the Taliban’s ire.

Zarifa Sherzoy, 19, is one of the boot camp’s female participants. A recent high school graduate, she had hoped to be taking college entrance exams and starting university classes this semester, but instead, she and her seven siblings spend most of their days at home. Between household chores, power outages, and her limited access to the Internet, she spends just an hour or two on the coding bootcamp. But still, even this has provided a new structure and meaning to her days. “After the Taliban arrived,” she recalls being “very tired at home every day thinking about how to end this.” But since the coding bootcamp started in late October, she says, while her problems haven’t disappeared, “my days are good.”

The virtual format has another added perk: it allows coders outside the Afghan capital, like Asad Asadullah, to participate.

When Jamshid Hashimi, then a 23-year-old software architect at the homegrown Afghan tech company Netlinks, launched Code Weekend in June 2014 to bring together Afghan programmers, he was inspired by the techno-optimism that then permeated Kabul.

A Fast Company profile on the country’s burgeoning startup scene, published in 2012, described the pervasive hopefulness this way: “Impossibly optimistic and totally obsessed, Afghanistan’s would-be tech moguls believe that computing will not only help them make money, but also secure peace in their land.”

And it was not just tech companies that were hopeful. Code Weekend was part of a slew of initiatives that aimed to spur youth innovation, entrepreneurship, and, ultimately, engagement and leadership in building a more progressive Afghanistan—some funded by international donors with this express purpose.

Other examples included the TEDxKabul program, which first came to Kabul with its “ideas worth spreading” (the TEDx tagline) in 2012, as well as other entrepreneurship-focused global franchises like Founder Institute-Kabul, which ran from 2014 to 2017. (Hashimi played a role in both of these programs, as did I, at different times.) By 2016, even Google had come to town,  launching Google for Entrepreneurs’ Startup Grind, a community for aspiring startup founders.

But Code Weekend outlasted all of these initiatives, even after some of its own leadership team, including Hashimi, left Afghanistan. In the seven years since its founding, the volunteer-organized group has held around 100 in-person meetups at universities, incubators, and the offices of prominent Afghan technology companies.During the pandemic, like much of the rest of the world, it went virtual.

Attendees met to learn everything from the basics of WordPress design and JavaScript languages to data collection tools for the field. (Afghanistan’s aid-driven economy had a big appetite for surveys and employed a number of ICT workers.) They  heard from local startups and engineering teams that came to introduce their new apps. They discussed books popular in the global tech community, like The Passionate Programmer (which Hashimi presented). And once, in an all-night event, open-source enthusiasts  came together to stream Laracon Online, the global conference for the open-source Laravel web development framework.

Then, in 2019, after years of these mostly weekend events, Code Weekend decided to go bigger: the group launched an in-person coding bootcamp. The first cohort ran with a pilot program of 15 developers, 12 of whom graduated from the four-month program. A few, according to Hashimi, found jobs as a result of their participation.

Elyas Afghan, 24, hopes to be one of them after he completes the bootcamp. Both of his older brothers are also in the field—one works for Rapid Iteration, Hashimi’s company—and partly as a result of their influence, he says, working with computers is all he’s ever wanted to do. More specifically, he hopes to find a job working for a global tech company.

After the successful pilot, Code Weekend organizers planned for a second cohort, but the coronavirus slowed down their efforts. Then, in late August of last year, the Afghan government collapsed—but rather than ending their plans, this accelerated them.

“Lots of dreams shattered when the government fell,” recalls Hashimi, who by then had relocated to Vancouver, Canada. Like many Afghans in the diaspora, he had a deep “urge to do something.” And what he settled on, he says, was continuing to help in the way that he knew best: supporting Afghan coders. “People need hope,” he said—and since earlier events focused on tech or innovation provided it, he hoped that a coding boot camp would do the same.

Hashimi’s goal for the bootcamp is to “provide a more sustainable way for Afghan youth to learn new and market-driven skills,” he wrote in our initial email correspondence,  and with those skills to “start earning an income for themselves and their families.”

For many of the bootcamp participants, all of whom share these goals, the potential for online work might be their only option. In 19-year-old Sherzoy’s family, only her father is currently employed—and what he makes is hardly enough to support her and her six siblings. After the bootcamp, she says, she hopes to “help my family and do something for my future.” She adds, “I do not want to be illiterate [uneducated].”

Thus far, however, most of the income opportunities are coming through Hashimi’s other efforts: in addition to Code Weekend, he also runs a software development company that employs or contracts with over 20 Afghan programmers, most of whom are still in Afghanistan, as well as an online freelancing platform, Yagan Kar (meaning “some work” in Dari), for Afghan freelancers.

It’s an adjustment to his original, pre-Taliban plans. Even after Hashimi left Afghanistan in 2016 for a master’s degree in the UK in innovation management, he used to spend three or four months in his home country every year, supporting the burgeoning tech community. “My dream,” he says, was “having the largest software house in Afghanistan.”

In a way, that’s still his goal. “I want to bring 1,000 jobs by 2023”  from outside the country, he says, which “would help a lot of freelancers and youths and developers and also the economy.”

He says that “all Afghans want to leave,” but the reality is that the vast majority of them are ineligible for resettlement and evacuation efforts. They will remain in Afghanistan, and will need new sources of income. Hashimi sees the international tech community as a potential  provider of that income, through both remote and freelance work.

But all of this will take time, and the country faces more urgent challenges.