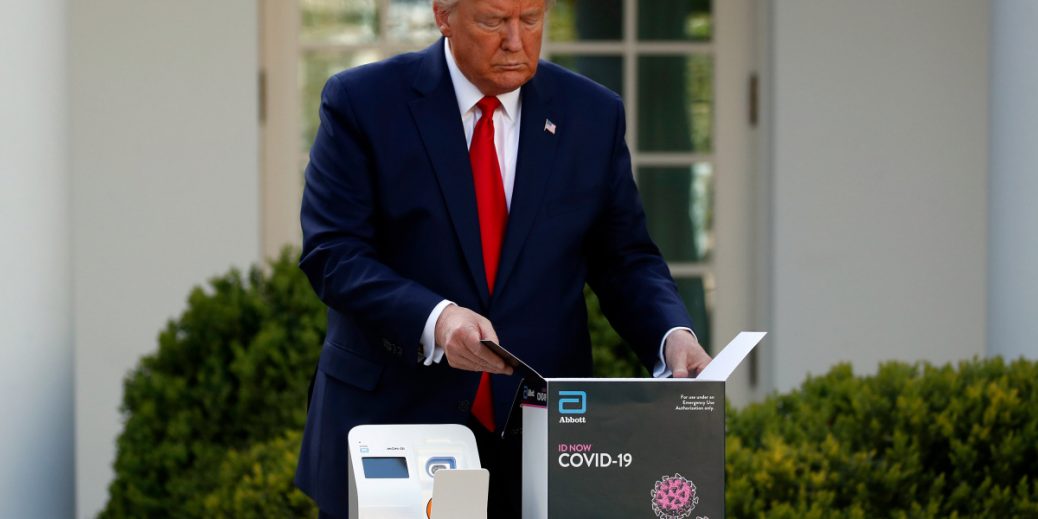 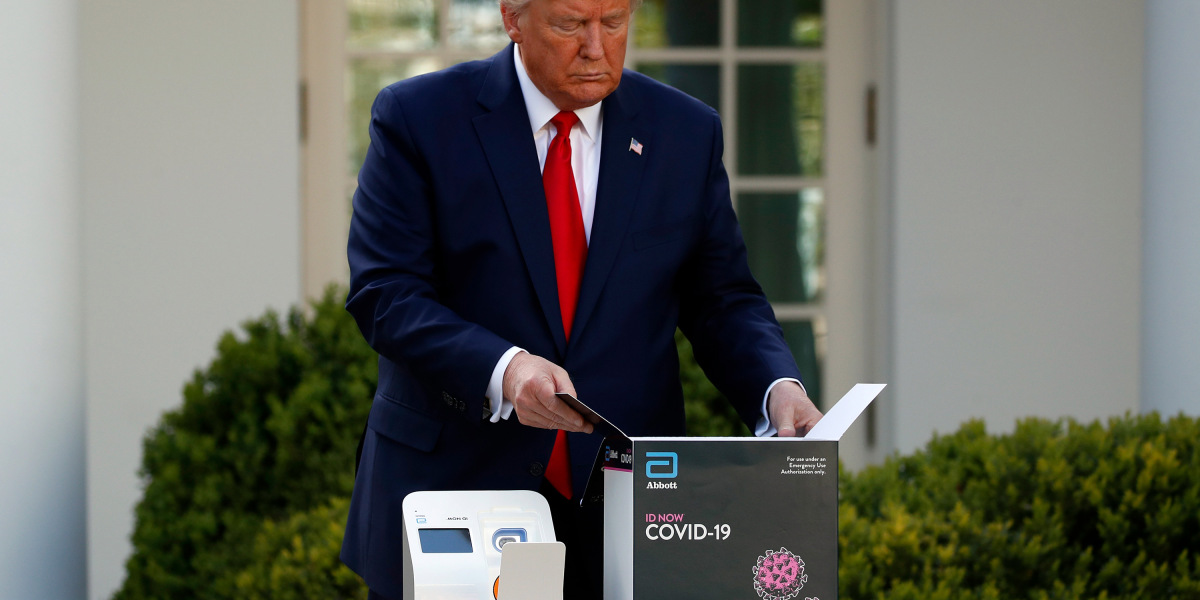 And yet the rapid test has led to false negatives (reports that you don’t have the virus when you really do). That means some people would have been unknowingly spreading the virus to others. The White House outbreak is a very good illustration of the limitations of rapid testing. But it should not deter us from the strategy entirely—we just need to use the technology properly.

A primer on testing

No test is 100% accurate, but the gold standard for diagnosing covid-19 is a PCR test. Your nasal passages are swabbed and the sample is run through what’s called a polymerase chain reaction. This process amplifies any viral genetic material that’s present, making it possible for clinicians to determine whether the virus has infected you or not.

The advantage of PCR tests is that they are extremely accurate. False negatives are usually very rare, close to only about 2% (though some studies early in the pandemic reported false negative rates as high as 37% for nasal swabs).

But these tests have disadvantages too. The swabs can be uncomfortable and are therefore tricky to administer correctly. The samples have to be delivered to a fully equipped lab. The PCR assay takes at least a few hours to complete, which is why labs typically report results in 24 hours at best (and this can stretch to over a week when there’s a backlog of samples).

Rapid tests, on the other hand, can deliver results in just minutes. They work in a variety of ways. Some detect genetic material as well—the ID NOW platform actually amplifies viral genetic material the same way a PCR test does, but without thermal cycling, which PCR tests use to help catalyze temperature-sensitive reactions that promote genetic amplification. Other rapid tests like BinaxNOW look for viral antigens(proteins of the SARS-CoV-2 virus).

But what rapid tests gain in speed, they lose in accuracy, especially when it comes to false negatives. Abbott says its ID NOW test has a false negative rate of 5.3%, but other studies have shown it to be as high as 75%. The company says BinaxNOW, meanwhile, can deliver results in under 15 minutes and boasts a false negative rate of just 2.9%. But the covid version was only unveiled in August and there haven’t been any independent studies to scrutinize these claims. Massachusetts-based E25Bio is working on a rapid antigen test for covid-19 that is supposed to deliver results in under 30 minutes, but it could deliver false negatives in one out of every 10 tests.

How to deploy rapid testing responsibly

Testing hinges on a concept called sensitivity: the ability of the test to detect what it’s supposed to detect. In this case, that’s the presence of the virus. The more abundant the virus is in your body, the easier it is for a test to detect it. PCR tests aid this process by artificially multiplying the viral genetic material in a patient’s sample, making them very sensitive: they can detect the virus when it is present at lower levels.

But the dynamics of the covid-19 infection present a problem for rapid tests, says Donald Thea, a public health expert at Boston University. At the earliest stages of infection, there’s not enough virus for the rapid tests to detect—they aren’t sensitive enough. You would need a PCR test to properly diagnose a covid-19 infection here. “When you first get the virus, there’s some period of time that’s required for the virus to multiply within your tissues,” says Thea. “The increase in the number of viral particles happens quite rapidly—measured over hours.”

The rapid tests work once a person has that higher viral load—that is, more viral particles in the body—and thus is more likely to be shedding particles and expelling them into the air. So if you’re newly infected, a rapid test you take in the morning could come back negative. But as the viral load builds in your body over the course of the day and you become more infectious to others, the test could then come back positive.

All of this is on a spectrum, and there are tons of unknowns to consider. Some people might be very infectious even early in the disease. Some people might have a slow ramp-up. We’re still trying to wrap our heads around the exact relationship between infectiousness and viral load, and how much virus is actually needed to cause an infection. And as we see from the research on superspreaders, it seems that only a few people actually prove infectious enough to transmit the virus (it’s estimated that 10% to 20% of infected individuals are responsible for 80% of new covid-19 cases).

The real power of rapid testing comes in deploying it widely throughout a population to test people very frequently. “It allows you to find infectious cases—particularly very infectious cases, like superspreaders—early, and allow them to self-quarantine to break the chain of transmission,” says Thea. Even though the lower accuracy of these tests means there will be some false positives and false negatives, “you’re still catching individuals who are highly infected and have a lot of virus they are shedding.”

This is where the White House got rapid testing wrong: it relied too heavily on it to keep sick people out of the building entirely instead of merely flagging those whose disease has already progressed to an infectious level. Under such a strategy, a single false negative can be devastating to everyone working inside, especially if no other precautions are being implemented. It’s also possible the deployment at the White House was botched as well: either testing wasn’t being done as frequently as is being claimed, or people who tested positive weren’t self-quarantining immediately (there have been scattered reports that after being alerted to a positive ID NOW result, the president and others continued normal activities and exposed people to the virus as they waited for a follow-up PCR test).

Genetic amplification tests are expensive no matter how long they take. But rapid antigen tests aren’t just fast—they’re also relatively inexpensive to make, which would make it much easier to mass-produce them and make them available to the public for use at home or at a place of business. Thea says that many, like E25Bio’s test and the BinaxNOW test by Abbott, could conceivably be made for as little as $1.

The downside is that the rise of these sorts of tests could make it harder for public health officials to keep tabs on the virus. Test results right now are sent to state health departments and then the CDC, and the data is made available to officials in order to help them make informed decisions about how to respond to changes in the virus’s spread. If everyone is relying on testing themselves outside medical settings, that critical data pipeline may be lost, since there’s no process or mandate for people to self-report these findings to health officials.

And given the chaotic state of coronavirus management in the US right now, it’s unlikely we’d see any strategy taking shape that would address this blind spot.