AOC’s Among Us livestream hints at Twitch’s political power 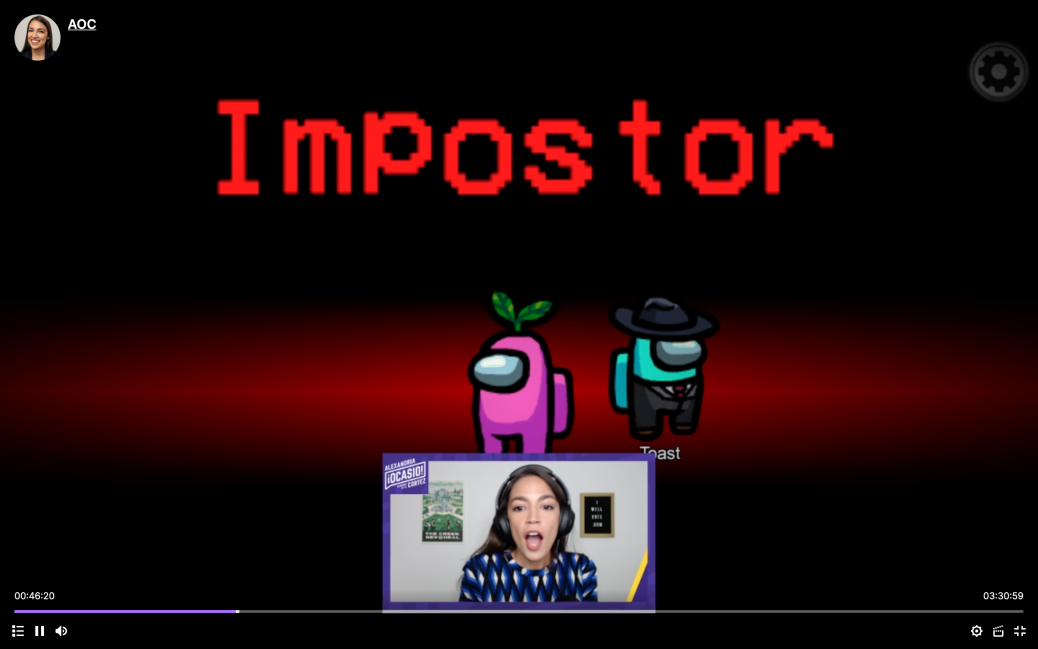 Just before 9 p.m. on October 20, Alexandria Ocasio-Cortez went on Twitch to play the hottest game in America: Among Us. “Hi, everyone! This is crazy!” she began, urging viewers to make a plan for how they will vote with I Will Vote, an outreach program funded by the Democratic National Committee.

After a few technical difficulties, Ocasio-Cortez spent three and a half hours playing the game with popular Twitch streamers as well as fellow Democratic congresswoman Ilhan Omar .

At one point Ocasio-Cortez’s Twitch stream attracted about 430,000 viewers, making her the third most popular streamer on the site ever. Not bad for your first go.

More important, the event offered a glimpse at the future of political campaigning. In the waning weeks of 2020’s volatile American election campaign, Democrats are increasingly turning to Twitch streams of popular video games to reach out to young voters and urge every last one of them to show up and vote. (Politicians are prohibited from using Twitch to fundraise, run ads, or monetize channels, according to a Twitch spokesperson.)

And you don’t get much more popular than Among Us. In September, it was downloaded nearly 84 million times on iOS and Android. And it’s been the most downloaded game on Steam, Apple, and Android since September, gaining nearly 200,000 players in the past few weeks alone.

The game itself is pretty simple. You play as a blob locked in a rocket ship with several other (differently colored) blobs. One of you—maybe you?—is a murderer, an “imposter.” The others, “crewmates,” have one mission: figure out who the imposter is before being “killed” by that imposter. You do this by running around the rocket ship, solving easy puzzles, and keeping an eye on any “sus” (suspicious) activity.

Among Us’s simplicity is reminiscent of Animal Crossing, which similarly has a fervent fan base dating back to the early days of the pandemic, when its explosion in popularity led to a worldwide shortage of Nintendo Switches. That game—you cultivate a deserted island populated by cute animals, build a house, and till the land to create a home—also had a fan in Ocasio-Cortez, who took to Twitter to open her DMs and offer codes to a lucky few who could then visit her virtual island.

It’s not only Ocasio-Cortez. Just last week, in Animal Crossing, the Biden campaign launched its own island, Biden HQ, featuring a Biden avatar in aviators who only says “No malarkey!” along with a shop and voting area—with text codes for players to sign up to vote and buy in-game merchandise benefiting the campaign. Biden HQ’s launch was streamed to hundreds of thousands live on Twitch.

Republicans are on Twitch too-—kind of. The Republican Convention streamed on the platform a couple of months ago, and President Donald Trump has an account, mostly used to stream favorable news segments or air campaign videos.

But the Republican Party has scoffed at the Democrats’ activities. “This explains everything. Not only does Joe Biden think he’s campaigning for president of Animal Crossing from his basement, his handlers are keeping him busy with video games while they stash him away to avoid talking about the bombshell reports of his corruption,” deputy national press secretary Samantha Zager said in a statement when asked about the launch of Biden HQ.

That sentiment may miss the potential of Twitch streams as a voter outreach tool. Nearly 140 million people were streaming on Twitch monthly as of July, and the number has grown exponentially during the pandemic.

Twitch’s video-game streams are far more nuanced than they at first appear, and the Amazon-backed company is arguably evolving into a social-media platform in itself, putting it in a position to become a political player alongside Facebook and Twitter.

The power of social media as a way to reach younger American voters was first identified in 2008, when Barack Obama’s Facebook-heavy grassroots campaign showed that this demographic could be encouraged to turn out in droves. That narrative was turned on its head in 2016, when Russian disinformation worked to target millennials’ parents and grandparents in a multipronged, sophisticated digital effort to ramp up support for Trump.

“We understand that the strategies in 2016 didn’t cut it,” says Briana Megid, the deputy national press secretary for NextGen, a progressive group focusing on youth outreach. “Poll-tested messaging, traditional spokespersons, and interviews with the political elite aren’t as appealing to your average unregistered voter as they may have been in the past.”

So far, unlike Facebook and Twitter, Twitch hasn’t had a massive disinformation problem or issues with content moderation. With a user group drawn almost entirely from millennials and Gen Z, it has become America’s pandemic-era alternative to TV, where a person can watch celebrities play games and engage in the type of side chats you might enjoy at a bar.

Democrats have recognized its value.

“It’s built political will,” says Jordan Uhl, who manages Twitch streaming for the progressive organization MoveOn. “It’s more an engagement platform than a streaming one.”